any of the reactions based on carbon monoxide and acetylene developed by the German chemist J. Reppe in Germany during World War II (1939–45). The most important of these reactions are given below.

Carbonylation is the joint action of CO and H2O (or alcohols, amines, mercaptans, acids) on acetylenes (1), olefins (2), and alcohols and ethers (3), with the formation of carboxylic acids and derivatives thereof. The catalysts used in carbonylation are compounds of Ni or Co: 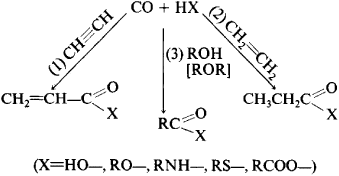 Vinylation is the addition of acetylenes to alcohols (1), acids (2), amines (3), or mercaptans (4) with the formation of vinyl ethers and esters, vinyl amines, and vinyl sulfides. The catalysts here are alcoholates and salts of alkali metals:

Ethynylation is the condensation of acetylene with aldehydes. The salts of heavy metals serve as catalysts:

Cyclopolymerization is the reaction of acetylene with itself to form cyclooctatetraene. The catalyst is either nickel cyanide or nickel acetylacetonate.

Reppe reactions form the basis of methods for obtaining some of the most important products of industrial organic synthesis as well as the starting materials for the production of certain types of plastics and rubbers.