[ri′sərch rē‚ak·tər]
(nucleonics)
A reactor primarily designed to supply neutrons or other ionizing radiation for experimental purposes; it may also be used for training, materials testing, and production of radioisotopes. Also known as teaching reactor.
McGraw-Hill Dictionary of Scientific & Technical Terms, 6E, Copyright © 2003 by The McGraw-Hill Companies, Inc.
The following article is from The Great Soviet Encyclopedia (1979). It might be outdated or ideologically biased.

a nuclear reactor that is a source of neutron and gamma radiation and is designed for various studies in numerous areas of science and technology.

Research reactors have a core, which contains the fission material, whereas thermal reactors also contain neutron moderators (light or heavy water, graphite, beryllium). Heat removal is provided in the reactor core. The core is surrounded by a neutron reflector. The reactor is also surrounded by a biological shield, which may be pierced by channels to obtain neutron beams. In order to obtain a powerful flux of thermal neutrons without fast neutrons, a device called the thermal column is used. The column, consisting of a good moderator (most frequently graphite), is placed with one end directly at the core; the other end emerges on premises suitable for the performance of experiments. Special devices or channels are provided for loading the materials to be tested into the core. Figure 1 shows the vertical cross section of 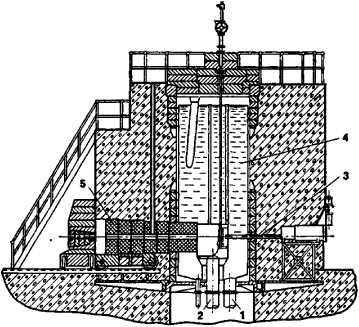 a Soviet VVR-M research reactor, which is designed for studies in nuclear physics, radiochemistry, radiobiology, and other areas.

According to the neutron spectrum in the core, research reactors, as well as nuclear reactors in general, are divided into fast reactors and thermal reactors. Most of the research reactors are thermal reactors, mainly of the heterogeneous type, meaning that the fuel elements alternate with the moderator in a certain order. Within the general range of 10l2-1015 neutrons/(cm2.sec), research reactors are divided into those with low, medium, and high neutron flux in the core. Pulsed research reactors are designed to provide short-term increases of the neutron flux without the corresponding increase of the average reactor output and the corresponding complication of the heat removal system. For example, a Soviet pulsed fast reactor with an average power level of 3 kW, generates at the moment of the chain reaction burst, a neutron flux of 1.3 X 1018 neutrons/ (cm2.sec) at the pulse maximum, which corresponds to an instantaneous power of 23 MW. The excessive reactivity is obtained by a piece of uranium 235 pressed into a disk, which rotates between the fuel rods. The pulsed reactor is used in the study of the physics of solids and liquids and in neutron spectrometry.

The cores of tank-type research reactors are highly compact and therefore possess the best physical characteristics. The reactors submerged in pools of water (swimming-pool reactors) are the safest, since all manipulations with radioactive products are performed through a layer of water. The channel-type reactors are convenient in terms of the layout and replacement of the elements or samples under study. However, all three types of reactors have an essential disadvantage: access to the reactor core or the interchannel space is difficult, which complicates studies.

A fourth type of research reactor has been developed in the USSR. This reactor is of the channel type in which the core with the fuel channels and pipelines are submerged in a pool of water. This reactor combines the advantages of research reactors of the channel-type as well as the swimming-pool type. The MR research reactor, put into operation in Moscow in 1963, is of this type and is designed mainly for the testing of fuel elements and materials. This reactor achieves a thermal neutron flux of 8 X 1014 neutrons/(cm2.sec) in the central neutron trap, consisting of a cylinder of 100 mm in diameter filled with water, at a power output of 20 MW. The power level of this reactor was increased to 40 MW by 1968. The fuel channels with tubular fuel elements, in which the samples to be irradiated are installed, are cooled with pressurized water. Beryllium blocks are used as moderators. Up to 25 experimental channel loops may be loaded in the reactor. The control rod drives are mounted on a movable carriage in order to facilitate access to the reactor core during reloading. The reactor pool is connected via a lock system with the storage pool containing a gamma-irradiation installation, which uses the spent fuel assemblies as the source of radiation. Figure 2 shows a cross section of the MR reactor with the storage pool. An even more powerful research reactor, the MIR, is in operation in Dimitrovgrad (USSR). This reactor makes it possible to achieve a neutron flux of 1.5 X 1015 neutrons/ (cm2.sec).

Several hundred research reactors of various types are in operation abroad. For example, the heavy-water tank-type reactor DIDO (Great Britain) is used for the production of isotopes and the testing of reactor materials. The graphite reactor PCTR (USA) is used in the study of physical constants. The swimming-pool reactor with light water FRI-1 (Federal Republic of Germany) is used for studies in neutron physics, chemistry, biology, and medicine. 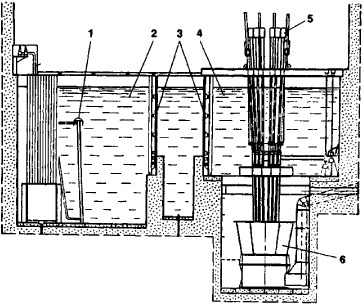 a low-power nuclear reactor used as a model for a future power reactor. Research reactors are used to improve reactor design, to solve technological problems, to determine operating conditions, and to evaluate the capabilities and prospects of the reactor represented by the model. Such reactors are usually equipped with a large number of metering and control devices and include provisions for the quick replacement of components and assemblies. Modern high-power reactors are highly complex and costly structures, and consequently many scientific, technological, and economic problems are easier and less costly to solve using experimental prototypes.

In contemporary nuclear-engineering practice, research reactors are usually installed in small pilot nuclear power plants. Preliminary experimental prototypes were developed for most of the high-power nuclear power plants built in the USSR and abroad.