Resolving Power of a Photographic System

Resolving Power of a Photographic System

The physical nature of the resolving power is related both to the finite character of the resolving power of optical systems and the optical thickness of the emulsion layers of photographic materials. Photographic materials consist of highly dispersed microcrystals of silver halide, 0.1–3 microns in diameter, suspended in a gelatin in a concentration of 108—1010 cm-3. Since the difference between the refractive index of the gelatin and that of the silver halide is great, there is strong scattering of light in the photosensitive layer, by virtue of which optical radiation spreads beyond the limits of the optical image formed on the layer by the lens. Thus, the boundaries of the elements of the photographic image are blurred in comparison with the optical image. In addition, resolving power is affected by light absorption in the gelatin as the light travels between silver microcrystals and by the difference in the microcrystals’ light sensitivity.

, where K = (Emax - Emin)/(Emax + Emin) and Rmax is the resolving power for K = 1; here Emax and Emin are the brightnesses of the images of the light and dark lines. The resolving power has little dependence on the kind of developer and developing conditions but a strong dependence on the wavelength of the exposing light. It is appreciably higher for illumination with ultraviolet radiation—which usually is greatly absorbed by the emulsion layer—and its dependence on wavelength in the optical sensitization region varies for large- and small-grain emulsions. 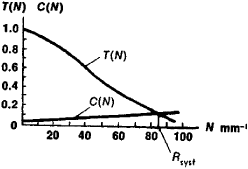 Figure 1. Graph of modulation transfer function, in which the modulation transfer coefficient T(N) is represented as a function of the grating spatial frequency N (the reciprocal of the grating period). The curve C(N) of the eye’s contrast sensitivity characterizes visual acuity. The point of intersection of these two curves gives the value of the resolving power Rsyst of the photographic system.