[ri′tān·iŋ ‚wȯl]
(civil engineering)
A wall designed to maintain differences in ground elevations by holding back a bank of material.
McGraw-Hill Dictionary of Scientific & Technical Terms, 6E, Copyright © 2003 by The McGraw-Hill Companies, Inc.

A wall, either freestanding or laterally braced, that bears against earth or other fill surface and resists lateral and other forces from the material in contact with the side of the wall.

See also: half-timbered wall
Illustrated Dictionary of Architecture Copyright © 2012, 2002, 1998 by The McGraw-Hill Companies, Inc. All rights reserved
The following article is from The Great Soviet Encyclopedia (1979). It might be outdated or ideologically biased.

a structure that keeps earth lying behind it from sliding.

Retaining walls are used in hydraulic engineering, road building, industrial construction, and civil engineering. They are very common in hydraulic engineering, in which they constitute one of the most important structural elements in embankments, berths, lock compartments, shore abutments of spillway dams and hydroelectric power plants, chutes, and overfalls. They are constructed of natural rock, concrete, reinforced concrete, metal, and wood. The cross-section area and the profile of a retaining wall are determined by calculations of its strength and its shear resistance. When the resistance is provided by its own weight, it is called a gravity-type retaining wall.

A generic structure that is employed to restrain a vertical-faced or near-vertical-faced mass of earth. The earth behind the wall may be either the natural embankment or the backfill material placed adjacent to the retaining wall. Retaining walls must resist the lateral pressure of the earth, which tends to cause the structure to slide or overturn.

There are several types of retaining walls. A gravity wall is typically made of concrete and relies on its weight for stability (illus. a). The mass of the structure must be sufficient to develop enough frictional resistance to sliding, and the base or footing of the structure must be wide enough to develop sufficient moment to resist overturning earth forces. A cantilever retaining wall (illus. b) gains a larger effective mass by virtue of the soil placed on the horizontal cantilevered section of the wall. Reinforced counterforts are spaced along the wall to increase its strength. A variation of the gravity retaining wall is the crib wall (illus. c) is usually constructed of prefabricated interlocking concrete units. The crib is then filled with soil before the backfill adjacent to the crib is placed. Bulkhead retaining walls (illus. d) consist of vertical sheet piling that extends down into the soil and is stabilized by one or more tiebacks and anchors periodically spaced along the structure. The sheet piling may be made of reinforced concrete, steel, or aluminum. See Cantilever

Retaining walls are often used in the marine environment, where they separate the retained soil from the water. Gravity walls (known as seawalls) can be constructed where strong wave and current forces are exerted on the wall. Bulkheads are more commonly found in sheltered areas such as harbors and navigation channels. See Harbors and ports 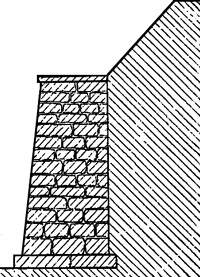 retaining wall
A wall, either freestanding or laterally braced, that bears against an earth or other fill surface and resists lateral and other forces from the material in contact with the side of the wall, thereby preventing the mass from sliding to a lower elevation. Also see cantilever wall, counterfort wall, gravity wall.
McGraw-Hill Dictionary of Architecture and Construction. Copyright © 2003 by McGraw-Hill Companies, Inc.

Feedback
Flashcards & Bookmarks ?
Please log in or register to use Flashcards and Bookmarks. You can also log in with
Flashcards ?
My bookmarks ?
+ Add current page to bookmarks
Mentioned in ?
References in periodicals archive ?
Effect of Geofoam on Overturning Safety Factor of Retaining Wall. As mentioned, the effect of geofoam on soil lateral displacement and statical forces on the cantilever retaining walls with yielding and nonyielding boundary conditions has been studied in the present research.
Effects of Geofoam Panels on Static Behavior of Cantilever Retaining Wall
The Plaxis is used to establish the finite element stability analysis model of the reinforced soil retaining wall. The interface unit is introduced in the modeling, which mainly includes the horizontal interface between the reinforced material and the filler, and the vertical interface between the wall panel and the filler.
Deformation Analysis of Reinforced Retaining Wall Using Separate Finite Element
1) retaining wall is absolutely rigid and in equilibrium;
Analytical Method for Analysis of Interaction of Retaining Wall Backfilled with Soil under Explosion Loading
Gravity retaining wall is characterized by simple structure, large section size, heavier wall body, and simple construction technology.
Analysis of Stress Characteristics and the Engineering Application of the Self-Balancing Retaining Wall
Thus, ES is obtained via the wavelet packet decomposition of a virtual impulse response function of responses to the retaining wall. Then, FFVS (the wavelet packet feature frequency band vector spectrum) is created, and DFVS (the wavelet packet damage feature vector spectrum) is proposed.
Investigation of Stability Alarming for Retaining Wall Structures with Damage
Retaining walls are designed to hold back soil that would move to a more natural slope or incline if the wall was not in place.
Retaining wall inspections underway
of Eugene, began a $1.3 million project to replace a retaining wall and shore up two eroding areas along a 13-mile stretch of the highway.
Coastal highway reopened, but repairs likely to take weeks
The retaining wall, which mirrors the grade of Gates Lane on the western side of the park and is about 20 feet tall at its highest point, has been crumbling for a number of years, prompting Webster Square area residents to complain about safety issues.
$1M may be needed for Bennett Field wall repair
Once the emergency work on the retaining wall is completed the closure will be lifted but the traffic lights will remain on Cilfynydd Road for the foreseeable future.
Emergency work forces lane closure
Concrete blocks used as retaining wall are seen at the Makkah accident site on Wednesday.
5 workers killed in Makkah as wall collapses
Published on Wednesday, 26 February 2014 10:02 PNN A retaining wall on Wednesday collapsed on houses at Bab al-Magharbeh (Mughrabi Gate) in Jerusalem due to Israeli excavations under the al-Aqsa Mosque.
A Retaining Wall at Mughrabi Gate Collapses Due to Israeli Excavations
He said the political administration of Mohmand Agency rehabilitated 2049 meters long link road in Bhai Dag village of Baizai Tehsil besides constructing 335 meters extensive retaining wall and a 15 meters long causeway to protect the road from future floods.
Federal Govt completes two projects in Mohmand Agency