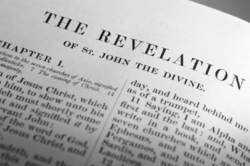 The Book of Revelation was inspired by the dream visions of St. John.

The most powerful dream vision in the Bible appears in the last book, Revelation, which presents itself as the prophetic account of Jesus’ return to earth. It is the only book of prophecy in the New Testament. The author of the book purports to be John, son of Zebedee and Salome, the latter one of the women who went to the tomb on Resurrection morning. After his brother James was slain by Herod Agrippa, John left Palestine and traveled to Asia Minor in missionary work. Under the reign of the Roman emperor Domitian, John was banished to the desolate isle of Patmos, off the coast of Turkey in the Aegean Sea. There, according to the text, is where John was given his vision of the future that comprises the Book of Revelation.

The revelation is given to John through signs and symbols contained in a series of visions, that an angel explains to him. Much of the content of the revelation is apocalyptic in nature, foretelling the terrible events that are to unfold at the end of time. When the first vision begins, John is in a trancelike state. Specifically, the author says that he was “in the Spirit” when he heard a loud voice. While the meaning of this expression is open to interpretation, it implies that John was in an altered state of consciousness.

In the Judeo-Christian Scriptures, angels regularly relay messages to human beings, both in dreams and while the recipients are awake. Such communications are usually direct and explicit, however, rather than indirect and symbolic, except in certain dream messages.