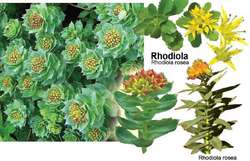 a genus of dioecious perennial herbs of the family Crassulaceae. The thick stems have alternate flat or almost cylindrical sessile leaves. The unisexual, mostly tetramerous flowers are various shades of yellow and red and are gathered in corymbiform inflorescences. The fruit is composed of four follicles.

There are about 50 species, distributed in the temperate belt of the northern hemisphere, mainly in the mountains of Asia. The USSR has about 20 species, growing mostly in the alpine belt and tundra near the glaciers and on rocky slopes, cliffs, lawns, and riverbanks. The roseroot (R. rosea), which has yellow flowers and reddish fruits, is found in the northern European USSR, the Carpathian Mountains, the Urals, the Altai, southeastern Siberia, the mountains of Kazakhstan, and the Far East. It is a medicinal plant. A liquid extract from the underground parts of the plant and the substance rhodosine obtained from the extract are used to increase working capacity and to treat exhaustion, insomnia, and headache. The roseroot, R. algida, and R. heterodonta are grown as ornamentals. Rhodiola is sometimes included in the genus Sedum.

Feedback
Flashcards & Bookmarks ?
Please log in or register to use Flashcards and Bookmarks. You can also log in with
Flashcards ?
My bookmarks ?
+ Add current page to bookmarks
TheFreeDictionary presents:
Write what you mean clearly and correctly.
Mentioned in ?
References in periodicals archive ?
Xu JF, Ying PQ, Han AM, Su ZG (1999) Enhanced salidroside production in liquid-cultivated compact callus aggregates of Rhodiola sachalinensis: manipulation of plant growth regulators and sucrose.
Cellular aggregation in secondary metabolite production in in vitro plant cell cultures/ La agregacion celular en la produccion de metabolitos secundarios en cultivos vegetales in vitro/A agregacao cellular na producao de metabolitos secundarios nos cultivos vegetais in vitro
After trying various drugs and natural remedies to ease his symptoms, he happened upon a lecture about rhodiola. He learned that the Soviets had been studying the herb since the 1940s, feeding it to Olympic athletes and cosmonauts.
Warming to a cold war herb: Soviet secret finds its way west
Eleuthero, Adaptogenic, American ginseng, schisandra, rhodiola rose ashwaganda
Herbs for heart health: herbalist Mimi Middleton explores herbs to lower C-reactive Protein
Sound scientific research supports rhodiola's promise to boost energy, endurance and stress relief as well as sexual well-being, he says.
That macho image and vitamins
* Rhodiola ingestion significantly increased plasma total antioxidant capacity.
CPE points
Researchers have been investigating the use of Rhodiola to treat stress as well as other conditions.
Ancient Siberian Herb Can Reduce Anxiety, Anger, and Fatigue
"I included ashwaganda, maca, reishi and rhodiola in powder form in my smoothies, and holy basil in capsules.
Can healing herbs and powerful plants keep us healthy? adaptogens are a hot topic at the moment, BUT MOST OF US ARE STILL IN THE DARK ABOUT THE POTENT POWER OFHERBS. LIZ CONNOR REVEALS ALL
Clarity continues to include Bacopa, Rhodiola, and Zinc, with clinical doses of their primary bioactive constituents.
Thrivous Upgrades Clarity with Bioavailable Vitamin B Complex
A randomised, double-blind, placebo-controlled, parallel-group study of the standardised extract SHR-5 of the roots of Rhodiola rosea in the treatment of subjects with stress-related fatigue.
Understanding adaptogens: The action that evades us
Ashwagandha and rhodiola are the most widely studied adaptogens in people.
21st CENTURY SNAKE OIL? 3 NEW "Wellness" TRENDS
Rhodiola can help with this as well by reducing appetite and cravings.
How to Overcome Food Cravings When You Start a New Diet
Rhodiola rosea, like ginseng, is another popular research-supported adaptogen used for centuries to increase physical endurance and longevity, as well as to manage fatigue, depression, and impotence.
Erectile Dysfunction: An Integrative Approach to Making it Work