[rō′däp·sən]
(biochemistry)
A deep-red photosensitive pigment contained in the rods of the retina of marine fishes and most higher vertebrates. Also known as retinal pigment; visual purple.
McGraw-Hill Dictionary of Scientific & Technical Terms, 6E, Copyright © 2003 by The McGraw-Hill Companies, Inc.
The following article is from The Great Soviet Encyclopedia (1979). It might be outdated or ideologically biased.

(also visual purple), the main visual pigment contained in the retinal rods of vertebrates (with the exception of certain fishes and amphibians during their early stages of development) and invertebrates. Rhodopsin is a complex protein (chromoprotein) made up of 11-cis-retinal (chromophore), a glycoprotein, that is, a protein bonded to sugars, and lipids (the opsin part). The molecular weight of rhodopsin is approximately 40,000 in vertebrates and 70,000 in cephalopods. Rhodopsin forms an integral and highly organized part of the ultra-structure of rods.

The visual act begins with the absorption by rhodopsin of a quantum of light energy (the optimal absorption of rhodopsin is at approximately 500 nanometers). With absorption, isomerization of 11-cis-retinal to all-trans-retinal occurs: 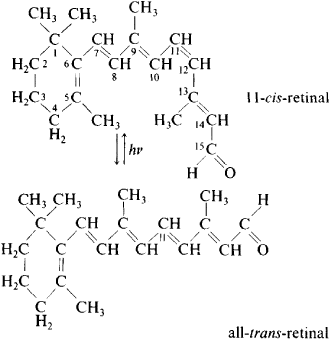 The isomerization leads to a gradual decomposition (photolysis) of the rhodopsin molecule, a change in the ionic transfer in the photoreceptor, and the initiation of an electric signal, which is transmitted to the nerve elements of the retina.

Rhodopsin is regenerated either through the synthesis from 11-cis-retinal and the opsin liberated after photolysis or through the absorption of a second quantum of light energy by one of the intermediate products of photolysis. Regeneration can also occur during the synthesis of new retinal rod distal segments; this is the principal means of regeneration where rods are concerned (Figure 1).

Figure 1. Cycle of the principal changes undergone by rhodopsin in retinal rods

It has been found that the cell membranes of certain halophilic bacteria contain a pigment that is also composed of retinal, a glycoprotein, and lipids. This bacterial rhodopsin, whose structure is yet to be conclusively established, appears to participate in photosynthesis together with other bacterial pigments.