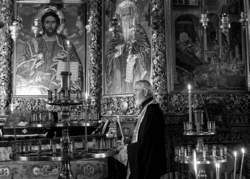 A priest lights candles at the Church of the Birth of Holy Mother at the monastery in Rila, Bulgaria, which was founded by a tenth-century hermit and is home to unique relics and artifacts, such as Raphael’s Cross. AFP/Getty Images.

Not long after Bulgaria converted to Eastern Orthodoxy, a hermit named Ivan Rilski (tenth century) began a monastery in the Rila mountains in the south-central region of the country. He soon became known as a healer and miracle worker, a wise counselor, and teacher. He attracted others to his monastic practice, and they joined him in creating one of the most prominent religious building complexes in the country. He would later be canonized by the Bulgarian Orthodox Church, and his mummified relics are on exhibit in the monastery’s church.

The monastery thrived through the fourteenth century with the support of the Bulgarian monarchy, but suffered greatly after the invasion of the Ottoman Turks in the fifteenth century. With Russian support, it revived somewhat at the beginning of the sixteenth century, but it was only with the complete overthrow of Muslim rule in the nineteenth century that a real revival was possible. The main church was erected in the mid 1840s. The monastery is home to a set of valuable icons painted in the fourteenth to nineteenth centuries, and a unique creation called Raphael’s Cross. The cross was made of a whole piece of wood. The monk Raphael used simple tools to carve hundreds of figures and religious scenes on the cross. He finished his work in 1802 after twelve years of work.

(also Rila Planina), a mountain massif in southwestern Bulgaria, the highest mountain massif on the Balkan Peninsula. The mountains reach 2,925 m in elevation (Mount Musala). They are composed predominantly of ancient crystalline and metamorphic rocks. The Rila Mountains are characterized by sharp peaks, cirques, and troughs. The Iskŭr, Maritsa, and Mesta rivers originate in the mountains. There are many lakes at elevations of 2,100–2,500 m. The slopes of the Rila Mountains are covered with oak, beech, and coniferous forests; above 2,000–2,100 m there are subalpine and alpine meadows. There is logging and pasture livestock breeding in the mountains.

The Rila Mountains have mineral springs and health resorts, including the Borovets resort. The area is popular with hikers, mountain climbers, and skiers. Located on the southwestern spurs of the massif is the Rila Monastery, which was founded in the tenth century by Ivan Rilski. Today, the monastery is a museum. It includes a stone tower from the 14th century, a pentagonal courtyard and church from the 19th century, and many paintings and wood carvings.