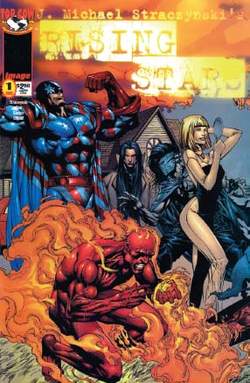 The night skies above the small town of Pederson, Illinois, are illuminated by a bright flash of extraterrestrial light in 1969, and the lives of 113 soon-to-be-born individuals are changed forever. The children born after “the flash” (as the event came to be known) are genetically enhanced, each bearing superpowers. The government monitors the “Specials,” quarantining them at Camp Sunshine for observation, treatment, and training. After a counselor is killed by one of the children, the government tries to keep the lot of them in custody, but the parents sue. When the case reaches the Supreme Court, a compromise is set: Dr. William Welles will both aid and supervise the children, and if any are determined to be dangerous, they will be taken into custody.

Years later, most of the Specials are adults. Some have become celebrities, while others are virtual unknowns. Some are superpowered protectors of the law, while others are criminals. Those who leave Pederson are tracked by the government. But when low-powered Specials begin showing up dead, it appears a serial killer is stalking the Specials. John Simon, the hero known as the Poet, is dispatched to find the murderer, but stopping the crimes may not be so easy—especially when it is revealed that every time a Special dies, the others gain something. And by 2032, only one Special remains, and he has a story to tell .

Rising Stars is one of a number of critically acclaimed series—including Watchmen, Powers, Astro City, Marvels, and a handful of others— which examine how superheroes might affect the real world, and how real people would react to superpowered beings living among them. Although there are 113 Specials, the series mainly focuses on about two dozen of them. These include Matthew Bright, a tough police officer with strength and flight powers; Elizabeth Chandra, a superstrong model, who appears to everyone as the ideal woman; Laurel Darkhaven, a telekinetic assassin with a specialty of killing terrorists; Randy Fisk, a.k.a. Darkshadow, a street vigilante with flight, strength, tracking powers, and a computer-equipped Shadowcave; Lee Jackson, a pyro-kinetic with a deadly secret in his past; Joshua Kane, a.k.a. Sanctuary, a hermaphroditic televan-gelist, who hides his true, female form from everyone; Stephanie Maas, a.k.a. Critical Maas, a woman with multiple personalities and the ability to mind-control other Specials; Jason Miller, a.k.a. Patriot (and Flagg), a strong, masked superhero working as a corporate spokesperson; and John Simon, a.k.a. the Poet, the withdrawn narrator of the Rising Stars story and the most powerful of all the Specials.

A twenty-four-issue maxi-series, Rising Stars is the creation of writer J. Michael Straczynski (also creator of the popular TV series Babylon 5). Wanting total creative freedom and ownership of his properties, Straczynski brought Rising Stars to Top Cow, an imprint of Image Comics. The first issue appeared in August 1999. Additionally, a Bright miniseries saw print in 2003, followed by two more miniseries in 2005 and 2006, and a pair of Rising Stars novels were published in 2002, written by Arthur Byron Cover. A series of action figures was released by Palisades in 2001. Straczynski also wrote the feature film script for Rising Stars: Born in Fire in late 2000, adapting the first story arc for an MGM and Atlas Entertainment movie. After the script was drastically revised by Anthony Russo and Joe Russo, tensions flared between Straczynski and Top Cow, and the film deal fizzled. Still, the comic book series stands as a critical and fan favorite, and a landmark in the synergy between comics and other media (with Straczynski’s crossover from the world of TV mirroring that of screenwriter/director Kevin Smith from the world of film to comics), like Marvel’s Daredevil and DC’s Green Arrow. Clearly, Straczynski caught the comics bug—literally—going on to write Marvel’s prestigious Spider-Man, the somewhat Rising Stars-like hit Supreme Power, also for Marvel, and DC’s Wonder Woman. —AM