(sou`thē, sŭth`ē), 1774–1843, English author. Primarily a poet, he was numbered among the so-called Lake poets. While at Oxford he formed (1794) a friendship with Coleridge and joined with him in a plan for an American utopia along the Susquehanna River that was never actualized. Southey married in 1795, made several trips to Portugal, and in 1803 settled with his wife and the Coleridges near Keswick in the Lake District. A prolific writer, he enjoyed great popularity and renown in his day and was made poet laureate in 1813. Today, however, his reputation as a poet rests upon his friendships with Coleridge and Wordsworth and a handful of short poems, notably "The Battle of Blenheim," "The Holly Tree," and the epic Vision of Judgment (1821). As a prose writer, however, his reputation has increased. Included among his prose works are biographies of Nelson (1813) and Wesley (1820), several histories, ecclesiastical writings, and translations from the French and Spanish. 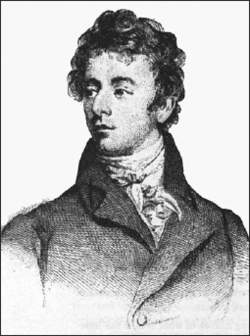 Writer Robert Southey incorporated vampirism into many of his works.

Robert Southey was a British poet and writer who was among the first to introduce the vampire theme into English literature. While attending Oxford University, he met Samuel Taylor Coleridge, who became a lifelong friend, mentor, and supporter. Toward the end of the 1790s, Southey’s health failed and he moved to Portugal to recuperate. While there he completed his first major work, a long poem titled?halaba the Destroyer.

Thalaba was to be the first of a series of epic poems drawing upon the mythologies of different cultures and portraying the fight of good over evil. It was in the midst of his story that he came face to face with the vampire.

Southey was inspired to write?halaba by the Arabian Tales, which mentioned the Domdaniel, a training school for evil magicians. In the story, set in Arabia, the title char acter lived in exile with his mother. His father and kinspeople had been slain by the evil magicians. The magicians resided in a cavern where they kept his father’s sword—which was to be the instrument of their destruction. Thalaba’s life turned into a quest to find the cavern, retrieve the sword, and avenge his father.

In the midst of his quest (in Book VII of the poem), Thalaba sought shelter from the rain in the chamber of the tombs and there had a brief encounter with a vampire. The vampire was none other than his bride Oneiza, who had recently died, on their wedding day. Oneiza’s body had been reanimated by an invading demonic force. Her cheeks were livid, her lips were blue, and her eyes possessed a terrible brightness. Thalaba grasped a lance and:

… through the vampire corpse He thrust his lance; it fell, And howling with the wound, Its fiendish tenant fled.

Immediately afterward, Oneiza’s spirit appeared and urged Thalaba to continue his great quest. In evoking the vampire, Southey demonstrated his awareness of the vampire tales from continental Europe. He mentioned the outbreaks of vampirism on the continent early in the eighteenth century in his notes, especially the case of Arnold Paul in Serbia, and more recent cases in Greece. In relating the case of the vampire Oneiza, Southey assumed the Greek notion that a vampire was a corpse inhabited by an evil spirit. Equally important for Southey were the translations of the German poem “Lenore,” which had been published in English by William Taylor in 1796, and adapted in a more popular form by Sir Walter Scott later that same year.

Even before finishing Thalaba, Southey wrote a ballad titled “The Old Woman of Berkeley.” The title character was a witch who possessed the characteristics of a lamiai, the ancient Greek vampire-like creature who preyed upon infants. As she herself was made to say:

From sleeping babes I have sucked the breath, And breaking by charms the sleep of death, I have call’d the dead from their graves.

Thus, Southey vied with Coleridge for the distinction of having introduced the vampire into English literature. Coleridge’s poem, “Christabel,” was published before Thalaba, and while most agree that it was a vampire poem, Coleridge never identified it as such. After Southey introduced the vampire to the English-speaking public, he did not linger over the vampire myth or further develop gothic themes. He did, however, go on to become one of England’s finer writers, the author of numerous poems and prose works of history and biography. In general, his prose writing received better reviews than his poetry, although he was credited with expanding the number of metrical patterns available to poets who came after him.

From 1792 to 1794, Southey studied at Oxford University, where he and S. T. Coleridge became friends. In 1795 his first anthology of verse, Poems, was published. Although he was originally a radical, as shown in the drama Wat Tyler (1794; published 1817), by the end of the 1790’s Southey had become a reactionary; his works are increasingly marked by mysticism and theological didacticism, an evolution that is reflected in the narrative poems Thalaba the Destroyer (1801), Madoc (1805), The Curse of Kehama (1810), and Roderick, the Last of the Goths (1814). The narrative poem The Vision of Judgement (1821) inspired a satirical parody of the same title by Lord Byron.

Southey’s works had an influence on W. Scott and P. B. Shelley. In Russia his works were translated by A. S. Pushkin, V. A. Zhukovskii, A. N. Pleshcheev, N. S. Gumilev, and E. G. Bagritskii.

Feedback
Flashcards & Bookmarks ?
Please log in or register to use Flashcards and Bookmarks. You can also log in with
Flashcards ?
My bookmarks ?
+ Add current page to bookmarks
Mentioned in ?
References in periodicals archive ?
Smith's monograph on Southey, A Quest for Home: Reading Robert Southey (Liverpool: Liverpool University Press, 1997), is devoted to this topic.
Traveling domestics: the Penates and the poet in Pushkin's lyric verse
Although Robert Southey is less well known today than many of his contemporaries, he enjoyed a literary reputation equal to that of Coleridge, Wordsworth, and Shelley during his lifetime.
W.A. Speck, Robert Southey: Entire Man of Letters
Coleridge's friendship, quarrel, and weak reconciliation with the poet Robert Southey foreshadowed his quarrel with Wordsworth.
In their youth
Although we shall be concerned here only with Zukovskij's three earliest translations of the ballads of Robert Southey, it is interesting to follow Zukovskij as he works toward the discovery of the English Romantic poets as a group.
Zukovskij's early translations of the ballads of Robert Southey (1)
Robert Southey was the Poet Laureate of England when she wrote this letter.
Austen and the Admiral: commemorating the bicentenary of the Battle of Trafalgar, 21 October 1805
A bewildering array of representations emerges as Astell traces Joan's influence on Robert Southey, Samuel Taylor Coleridge, and Thomas De Quincey, whose Jacobin Joan somehow evades religious sanctity altogether, to George Bernard Shaw, whose version of Joan looks suspiciously like an opponent of feudalism and a Protestant martyr to boot.
Joan of Arc and Sacrificial Authorship
Chapter 1 is constructed around the conception of war in the period and the myths of the nation created before, during, and after the Peninsular War (1811-14) in texts such as Felicia Hemans's The Domestic Affections and England and Spain, Robert Southey's Roderick, Walter Savage Landor's Count Julian, Sir Walter Scott's The Vision of Don Roderick, and Lord Byron's Childe Harold, I.
Poetic Castles in Spain: British Romanticism and Figurations of Iberia
Organized into four chapters which are further subdivided into extremely short sections (two to seven pages each), her book traces the complicated route of the evolution of romanticism in the works of Percy Bysshe Shelley, Robert Southey, Victor Hugo, Alfred de Musset,William Wordsworth, and others, and then the post-romantic poetics of, primarily, William Wordsworth, Theophile Gautier, Mathew Arnold, Alfred Tennyson, and Oscar Wilde.
Haddad, Emily A. 2002. Orientalist Poetics: the Islamic Middle East in Nineteenth-Century English and French Poetry
Growing up during the heyday of this movement, scholar-poets such as Robert Southey considered the wide range of world religions, pondering what they saw as a combination of profound truth and poisonous superstition in the universal development of spiritual belief systems.
British conquistadors and Aztec priests: the horror of Southey's Madoc
I consider Coleridge (together with the sorely underrated Robert Southey) as the forerunners and the source of many key ideological lines of the British nineteenth century, first and foremost the Oxford Tractarians with their absolutely enormous impact on both Anglican and Catholic thinking in the 1830s, 1840s, and later.
Haney, David P. The Challenge of Coleridge: Ethics and Interpretation in Romanticism and Modern Philosophy
In 1796, Jackson recounts, Coleridge and Robert Southey, his brother-in-law, wrote an epic poem, Joan of Arc.
Edgy Observations