(rəkō`kō, rō–), style in architecture, especially in interiors and the decorative arts, which originated in France and was widely used in Europe in the 18th cent. The term may be derived from the French words rocaille and coquille (rock and shell), natural forms prominent in the Italian baroquebaroque
, in art and architecture, a style developed in Europe, England, and the Americas during the 17th and early 18th cent.

The baroque style is characterized by an emphasis on unity among the arts.
..... Click the link for more information.  decorations of interiors and gardens. The first expression of the rococo was the transitional régence stylerégence style
, transitional style in architecture and decoration originated in France during the regency (1715–23) of Philippe, duc d'Orléans. The most important practitioners of the régence were Gilles Marie Oppenord and Robert de Cotte.
..... Click the link for more information. . In contrast with the heavy baroque plasticity and grandiloquence, the rococo was an art of exquisite refinement and linearity. Through their engravings, Juste Aurèle Meissonier and Nicholas Pineau helped spread the style throughout Europe. The Parisian tapestry weavers, cabinetmakers, and bronze workers followed the trend and arranged motifs such as arabesque elements, shells, scrolls, branches of leaves, flowers, and bamboo stems into ingenious and engaging compositions. The fashionable enthusiasm for Chinese art added to the style the whole bizarre vocabulary of chinoiseriechinoiserie
, decorative work produced under the influence of Chinese art, applied particularly to the more fanciful and extravagant manifestations. Intimations of Eastern art reached Europe in the Middle Ages in the porcelains brought by returning travelers.
..... Click the link for more information.  motifs. In France, major exponents of the rococo were the painters Watteau, Boucher, and Fragonard and the architects Robert de Cotte, Gilles Marie Oppenord, and later Jacques Ange Gabriel. The rococo vogue spread to Germany and Austria, where François de CuvillièsCuvilliès, François de
, 1695–1768, French architect, decorator, and engraver. He introduced into Germany the rococo style of decoration then popular in France.
..... Click the link for more information.  was the pioneer. Italian rococo, particularly that of Venice, was brilliantly decorative, exemplified in the paintings of Tiepolo. The furniture of Thomas ChippendaleChippendale, Thomas
, 1718–79, celebrated English cabinetmaker. His designs were so widely followed that a whole general category of 18th-century English furniture is commonly grouped under his name.
..... Click the link for more information.  manifested its influence in England. During the 1660s and 1670s, the rococo competed with a more severely classical form of architecture, which triumphed with the accession of Louis XVI.

in music, 18th-century reaction against the baroque style. Less formal and grandiose in structure, it was a graceful rather than a profound style, more hedonistic than venturesome. Extreme manifestations were in French keyboard music, the finest composer in the style being François CouperinCouperin, François
, 1668–1733, French harpsichordist and composer, called "le Grand" to distinguish him from the other musicians in his family. His harpsichord music, in its charm, delicacy, and graceful ornamentation, represents the culmination of French rococo.
..... Click the link for more information.  (1668–1733). Jean Philippe RameauRameau, Jean Philippe
, 1683–1764, French composer and theorist. He was organist at the cathedral in Clermont and at Notre Dame de Dijon. In the early part of his career his wrote two treatises on harmony (1722, 1726) in which he introduced the important and influential
..... Click the link for more information.  represented the less frivolous French musical thought of the period. In Germany the style was adopted to some extent by Georg Philipp TelemannTelemann, Georg Philipp
, 1681–1767, German composer. From 1721 until his death he was director of music for the five major churches in Hamburg. Extremely prolific, he composed scores of overtures, 40 operas, 12 complete services for the year, and other works in
..... Click the link for more information. , Johann Mattheson (1681–1764), and the sons of J. S. Bach, and it was an element in the keyboard sonatas of Domenico ScarlattiScarlatti, Alessandro
, 1660–1725, Italian composer. He may have studied with Carissimi in Rome, where his first opera was produced in 1679. In 1684 he went to Naples as master of the royal chapel and there composed operas for the royal palace and chamber music for the
..... Click the link for more information. . Traces of rococo are present in the early works of Haydn and Mozart.
The Columbia Electronic Encyclopedia™ Copyright © 2013, Columbia University Press. Licensed from Columbia University Press. All rights reserved. www.cc.columbia.edu/cu/cup/
The following article is from The Great Soviet Encyclopedia (1979). It might be outdated or ideologically biased.

a style in European plastic arts of the first half of the 18th century and in European literature of the entire 18th century. The rococo emerged in France during the crisis of absolutism. It reflected the hedonism of the aristocracy and represented a flight from reality into a world of theatricalized play.

In the plastic arts, the rococo style had its greatest influence on interior decoration, which took on extremely fanciful and convoluted qualities. The early phase of the French rococo style, which lasted roughly until 1725, was known as the Regency style. Forms lost their monumentality, and fussy ornamentation was introduced into interior decoration. Household objects and furnishings were distinguished by whimsically curving surfaces.

The height of the rococo, known as the style of Louis XV, lasted approximately from 1725 to 1750. Ornamentation included intricately carved volutes, scrolls, seashell motifs, and cupid heads. Widely used in interior decoration were elaborately framed reliefs and painted panels (including panels above doorways). Numerous mirrors were installed to intensify the sense of movement beyond the surface of the walls.

The primarily ornamental orientation of the rococo prevented the style from having a significant influence on the structural design and exterior ornamentation of buildings. For example, in French hôtels by such architects as G. M. Oppe-nord, J. A. Meissonier, and G. B. Boffrand sumptuous rococo interiors were combined with relatively austere exteriors. The rococo style spread into the architecture of other European countries—Germany (G. W. von Knobelsdorff, B. Neumann, and, to some extent, M. D. Pöppelmann), Austria, Poland, and Bohemia—but the style was often less a reflection of French traditions than a special variant of late baroque.

Rococo painting, sculpture, and graphic art are characterized by erotic, erotic-mythological, and pastoral themes. The art is intimate in spirit and asymmetric in composition. Rococo sculpture consists primarily of reliefs and statues intended for interiors, small statuettes, sculptural groups, and busts. The sculpture included works of terra-cotta, painted porcelain, and unglazed porcelain (J. B. Lemoyne in France and J. J. Kändler in Germany). The rocaille painting, which is iridescent and somewhat pale in color, is primarily decorative (N. Lancret, F. Lemoyne, J.-M. Nattier, and F. Boucher in France). Rococo applied art, executed by artists who were especially skilled at revealing the expressive possibilities of their mediums, is distinguished for the integration of supporting and supported elements, elaborate decoration and finishing, and, often, deliberately exotic motifs borrowed from Chinese art.

In Russia rococo tendencies were particularly widespread in the mid-18th century. The style was employed chiefly in the decoration of palace interiors by V. V. Rastrelli and in exterior sculptural moldings by Rastrelli, S. I. Chevakinskii, and others. The rococo was incorporated in various applied arts, including wood carving, the production of fine silver and porcelain, furniture manufacture, and jewelry design.

By the 1760’s the rococo style had begun to lose its popularity and was replaced by classicism.

Rococo literature is refined and elegant but lacks depth and civic ideals. It has no place for heroism and duty; courtly games and frivolous insouciance reign supreme. Hedonism is the supreme “wisdom” of the rococo, with poets singing the praises of idleness, voluptuousness, the gifts of Bacchus and Cytherea, and rural solitude. All “lowly,” disturbing truths are banished from life. The world breathes languor and light-heartedness but has in it something ephemeral and fragile, as if it were made of porcelain. The rococo in literature tends toward the intimate and miniature.

The rococo style appeared in the literature of Italy (P. Rolli, C. Frugoni, P. Metastasio) and Germany (F. von Hagerdorn, J. Uz). In Russia the “light poetry” of the school of A. P. Suma-rokov and Iu. A. Neledinskii-Meletskii was akin to rococo literature. Themes and plots from the rococo were used by Voltaire, Diderot, C. M. Wieland, K. N. Batiushkov, and A. S. Pushkin. 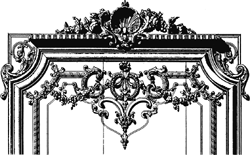 Rococo
A style of architecture and decoration, primarily French in origin, which represents the final phase of the Baroque around the middle of the 18th cent.; characterized by profuse, often semiabstract ornamentation and lightness of color and weight.
McGraw-Hill Dictionary of Architecture and Construction. Copyright © 2003 by McGraw-Hill Companies, Inc.

1. a style of architecture and decoration that originated in France in the early 18th century, characterized by elaborate but graceful, light, ornamentation, often containing asymmetrical motifs
2. an 18th-century style of music characterized by petite prettiness, a decline in the use of counterpoint, and extreme use of ornamentation
www.artchive.com/ftp_site_reg.htm
www.artlex.com/ArtLex/r/rococo.htmlm
Collins Discovery Encyclopedia, 1st edition © HarperCollins Publishers 2005

(jargon, abuse)
Baroque in the extreme. Used to imply that a program has become so encrusted with the software equivalent of gold leaf and curlicues that they have completely swamped the underlying design. Called after the later and more extreme forms of Baroque architecture and decoration prevalent during the mid-1700s in Europe. Alan Perlis said: "Every program eventually becomes rococo, and then rubble."

Feedback
Flashcards & Bookmarks ?
Please log in or register to use Flashcards and Bookmarks. You can also log in with
Flashcards ?
My bookmarks ?
+ Add current page to bookmarks
Mentioned in ?
References in periodicals archive ?
The latter, which costs pounds 60, is perfect for the floor or that huge sofa, while the Roccoco costs pounds 25.
Cushion life's blows; IT'S SO EASY TO GET INTO THE MOOD FOR WINTER. CREATE A LITTLE WARMTH WITH SOME OLDE WORLD FAVOURITES
Its prominent Roccoco features from the 18th century make it easy to find and it is famous in Prague as a meeting place.
The coffeehouses of enchanted Prague
Later, the lesser talents of subsequent painters and the popularity of Roccoco and neo-classic styles led to the degeneration of the mestizo style into "folk art," ex-votos or tourist copies.
Three artists of Cuzco: three centuries of colonial art
Roccoco mirrors, chandeliers, pictures and paintings, some from the family album, crowd the walls and the feeling is of being invited into an eccentric uncle's old home.
Our judges' verdicts on the best places to eat and drink in SouthWales
But it served the shape of the production very well and MacFarlane uses it for the transformation scene, where Cinderella is ushered finally into her roccoco silver equipage, harnessed to a pair of very fine lizards (Lachlan Monaghan and Jonathan Payn in this week's cast).
A ball with Cinderella; Review
FANS of Big Brother will recall many a fine evening spent on eviction night at the Roccoco Lounge.
Golden ticket? A fat chance! Excitement builds over Big Brother - Eye On Broad ST
Nick Nicklas, barkeep at Roccoco, Hagerstown, MD, offers this one.
Svedka clementine crush
The essence of Roccoco and Gothic featured heavily and decoration entwined these flavours with excessive ornamentation, thickly dressed drapes and plump overstuffed upholstery.
Colin & Justin: Victorian values