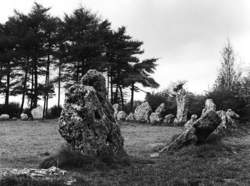 Located in Oxfordshire, England, three miles northwest of Chipping Norton, according to local legend the Rollright Stones were originally an invading Danish king and his army. They were turned to stone by a local witch who, in turn, changed herself into an elder tree. The story goes that the king, encountering the witch, asked if he would become king of England. She replied that if he took seven strides to the top of the ridge and was then able to see the village of Compton, he would indeed become king. The king did so but found his view obstructed by an ancient burial mound. The witch then cried out, "Sink down man and rise up stone, King of England thou shalt be none." At that, the king and his knights were all turned to stone. A second group of knights, who followed at a distance, were actually whispering together, plotting against the king. These, too, were turned to stone by the witch, becoming the Whispering Knights.

It is said that the largest of the King's Men stones was once temporarily removed to be used as a footbridge over a stream, but the person who took it was unable to rest until he returned it to its original place. Pieces of the King's Stone used to be chipped off to be kept as protective charms, especially for soldiers going into battle.

Wiccans, but intrusion by outsiders deterred them and they discontinued such use.

Feedback
Flashcards & Bookmarks ?
Please log in or register to use Flashcards and Bookmarks. You can also log in with
Flashcards ?
My bookmarks ?
+ Add current page to bookmarks
Mentioned in ?
References in periodicals archive ?
GARY STOCKER, of Lewis Road, Radford Semele, sent in this picture of the King Stone - part of a group of prehistoric stones known as the Rollright Stones.
Your view
it may be because there was one, called the rollright Stones, near the village where i grew up in england.
Full Circle
Rollright Stones (www.rollrightstones.co.uk) - Step back in time to see one of the few stone circles in the centre of the country.
Out And About
George and the dragon (148); its disastrous fires of 1594 and 1595, which were known in London (238); or its local Rollright Stones legend (237).
James Shapiro. A Year in the Life of Willliam Shakespeare
Here the Bronze Age circle of the Rollright Stones (3), nicknamed the King's Men, can be found and along the road another group the Whispering Knights.
Wool and stone
From Oxford, passengers head to Warwickshire's Barrow Downs and the ancient Rollright Stones.
The Mag: Holidays: Follow Tolkien to Middle Earth
Chanting ceremonies have been held at the Rollright Stones on the Oxfordshire/Warwickshire border, a popular site for unconventional weddings and naming ceremonies, in a bid to catch the culprits.
PERSPECTIVE: Party time for all the young druids; Today is the summer solstice -and for druids, heathens and witches, it's a kind of magic, writes Richard McComb
The Rollright Stones, near Chipping Norton on the Oxfordshire/Warwickshire border, were splattered in an incident which was discovered on Thursday.
Pagans offer reward in bid to catch vandals
However, on the way there you may want to stop at the Rollright Stones, a round circle of rocks similar to Stonehenge (but much more human in size) that dates from before 1000 BC.
A week in an English cottage
Here the Bronze Age circle of the Rollright Stones (3), nicknamed the King's Men, can be found and just along the road another group called the Whispering Knights.
The best in country charm; Great Drives
Turn left and in a 1/4 mile park in the layby on the right next to the Rollright Stones. A small fee is payable at the kiosk.
CountryWalks: A walk for all abilities; ROLLRIGHT STONES to SALFORD, five miles, map 191 Explorer
White witches who care for the Rollright Stones, near Long Compton, Warwickshire, were furious when they found the boulders splashed with yellow paint earlier this month.
Angry witches put curse on stone vandals