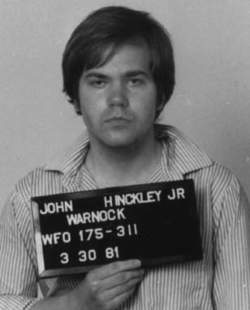 A mug shot of John Hinckley Jr. after he tried to assassinate President Ronald Reagan in 1981.

It has been often said that truth is stranger than fiction. If you were to write a screenplay about a kook who wants to assassinate the president of the United States to impress an actress he doesn’t have a snowball’s chance in hell of meeting, and then you had the kook’s older brother planning a dinner date with one of the vice president’s sons on the same day as the attempted assassination, what do you think any potential producers or directors would say when they read your script? After they stopped laughing, that is.

About 2:30 in the afternoon of March 30, 1981, John Warnock Hinckley Jr. fired six bullets from a Rohn R6-14 .22 revolver into the cluster of Secret Service agents and dignitaries surrounding President Ronald Reagan as he left the Washington, D.C., Hilton Hotel after making a speech. Before his bodyguards could push Reagan into the armored sedan awaiting him, one of the six slugs ricocheted off a fender, penetrated his armpit, and punctured his lung. The assassin’s wildly fired bullets also struck Reagan’s press secretary, James Brady, in the left temple, police officer Thomas Delahanty in the neck, and Secret Service agent Timothy J. McCarthy in the stomach.

On that same day, Scott Hinckley, John’s older brother, had a dinner date at the Denver, Colorado, home of Neil Bush, son of Vice President George H. W. Bush. The Bushes and the Hinckleys had known each other for more than twenty years, starting when Bush and John Sr. were in the oil business together in Texas. The Hinckleys had made large contributions to the vice president’s political campaign. Scott Hinckley was the vice president of his father’s Vanderbilt Energy Corporation in Denver, and he had been invited to Neil Bush’s home as a date for a girlfriend of Sharon Bush, Neil’s wife. The dinner was canceled when news of the attempted assassination reached Denver.

In news special reports aired and televised immediately after the shooting, some accounts stated that at least one shot had been fired from a hotel window above the president’s limousine. Such news items immediately prompted claims that there had been a second shooter. As the video clip of the shooting was viewed again and again, it seemed unlikely that Reagan could have been hit from in front when the bulletproof door was opened between him and the assassin. Later news reports explained that a Secret Service agent had fired the shot reported in earlier accounts from his position on the hotel overhang. This supposed clarification only prompted speculation about the president’s being shot by one of his own bodyguards.

In Martin Scorsese’s 1976 film Taxi Driver, Robert DeNiro plays a mentally unstable Vietnam veteran, Travis Bickle, who drives a cab and fantasizes about a beautiful blonde who works at a political campaign headquarters. In his unbalanced state of mind, the taxi driver figures that his assassination of a presidential candidate would really make him somebody in the eyes of the world and of his fantasy object. As the film unfolds, he becomes increasingly depressed at the sleaze and degradation around him and anoints himself the defender of a teenaged prostitute, Iris, played by Jodie Foster. Bickle abandons the plan to kill the candidate, but there is a violent shootout in which he rescues Iris from her pimps.

John Hinckley Jr. claimed to have seen Taxi Driver more than a dozen times, and he became fixated on Jodie Foster and the idea of gaining fame through assassination. When he read that Foster had enrolled at Yale, he enrolled in a Yale writing course so that he could be near her. He left letters and poems in her campus mailbox, and he managed to have two telephone conversations with the actress, during which he assured her that he was not a dangerous individual.

It was probably in the fall of 1980 that the images from Taxi Driver and the unbalanced rage of Travis Bickle began to blend with Hinckley’s confused mind to form a reality in which he would gain fame and win Jodie Foster’s respect if he were to kill the president of the United States. Hinckley decided to stalk President Jimmy Carter and went to one of Carter’s campaign appearances, but he left his gun collection—three pistols and two rifles—in his hotel room. When he followed Carter to Nashville, airport security detected handguns in his suitcase. Incredibly, Hinckley was fined $62.50 and released after five hours in custody.

Some conspiracy researchers believe that at this point the unstable young man was already on the radar of the Secret Service and that he might have been tapped by a shadow agency as a potential assassin. Investigations would effortlessly yield intelligence that Hinckley had stalked Senator Ted Kennedy as well as President Carter. Hinckley had a personal library full of books and articles on Sirhan Sirhan, Robert Kennedy’s assassin, and on Arthur Bremer, the failed assassin of George Wallace. In October 1980 he had traveled to Nebraska and had attempted to contact the American Nazi Party. Since Hinckley was already seeing a psychiatrist and had been prescribed psychoactive drugs, it would have been a relatively simple matter to see that he received more powerful drugs and be placed on a program that would bring him under mind control by a shadow agency.

On March 29, 1981, Hinckley checked into Park Central Hotel in Washington. The next day, he wrote a letter to Jodie Foster detailing his intentions to assassinate President Reagan. Then he dosed himself heavily with Valium, left the hotel, and took a cab to the Washington Hilton to await the president and to make history.

Vice President Bush did fall briefly under a little cloud of suspicion that soon blew away. He was a member of Skull and Bones, the elite secret society of powerhouse overachievers and superstars of business. He had been director of the CIA, and it was rather common knowledge that he enjoyed the support of Agency insiders, who preferred their former chief to Reagan. But none of those activities or positions made him party to an attempted assassination on the commander in chief.

Hinckley was immediately arrested, and his trial began on May 4, 1982. After seven weeks of testimony and three days of jury deliberation, he was found not guilty by reason of insanity. Hinckley was placed in St. Elizabeth’s Psychiatric Hospital in Washington, D.C., where he will remain indefinitely. In 1999 he was allowed supervised visits outside the grounds of the hospital, but these privileges were revoked when a book about Jodie Foster was found hidden in his room. In December 2003 Hinckley was allowed to have unsupervised visits with his parents, and additional visits were allowed beginning in 2011.