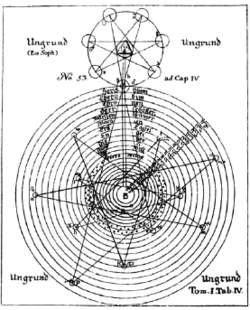 The Rosicrucian Fellowship was established in 1907 by the well-known astrologer Max Heindel. Heindel moved to the United States from his native Germany and settled in Los Angeles in 1903. He joined Katherine Tigley’s branch of the Theosophical Society, lecturing and serving as president of the local lodge in 1904 and 1905. He was also acquainted with Rudolf Steiner, who broke away from the Theosophical Society following the promotion of Jeddu Krishnamurti as the new world teacher.

In 1907, Heindel traveled to Germany where he claimed to have encountered an elder brother of the Rosicrucian order who led him to the Temple of the Rosy Cross, where he “received” his first book, The Rosicrucian Cosmo-Conception. After his return to America, he established the first center of his new order in Columbus, Ohio, in 1908. Centers were soon established in Los Angeles; North Yakima and Seattle, Washington; and Portland, Oregon.

The Rosicrucian Cosmo-Conception is a variation of theosophy, differing principally in its more extensive reliance upon Christianity and Christian symbols, which reflects the influence of Rudolf Steiner. Heindel also placed a greater emphasis upon astrology. The Rosicrucian Fellowship was a major factor in the expansion of astrology in the early part of century. Until relatively recently, most astrologers, even those not connected with the fellowship, used the ephemerides and table of houses published by the fellowship.