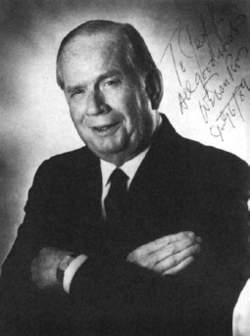 Novelist William Edward Daniel Ross wrote 33 books inspired by the Dark Shadows television program and movies. In 1930 Ross began his career as the manager of an acting company with which he also acted. Very early in his professional life, he was awarded the Dominion Drama Festival Prize for Playwriting.

During the 1960s he turned his attention to writing, and through his long career become one of the most prolific writers of gothic, romantic, historical, and western fiction under 21 different pseudonyms. His first novel, Summer Season, appeared in 1962 under the pseudonym Jane Rossiter. His output reached an all-time high in 1967 when over twenty novels appeared as paperback volumes. Besides his 358 novels, he wrote some 600 short stories, many of them mysteries that have appeared in such publications as The Saint Mystery Magazine, The Chaplain, and Mike Shayne Mystery Magazine. In the mid-1960s, Ross began to produce gothic fiction under the names Clarissa Ross and Marilyn Ross. Under the latter name, in December 1966 he saw the publication of the first of the thirty-three Dark Shadows volumes that appeared during the next six years. The novels, with such names as The Curse of Collinswood, The Phantom and Barnabas Collins, and Barnabas, Quentin, and the Vampire Beauty, featured some of the Dark Shadows TV characters in new situations created by Ross. At one point, over a fourteen-month stretch, these novels appeared monthly. Barnabas Collins, the popular vampire added to the show in the spring of 1967, did not appear in the first five novels. However, after he became the popular center of the show, subsequent printings of the novels included his picture on the covers. The last volumes continued to appear for some months after the show was canceled. A special volume, Ross’s movie tie-in House of Dark Shadows, included a photo section. A thirty-fourth volume, Barnabas, Quentin, and the Mad Ghoul, was plotted by Ross and scheduled but never published.

While working on the Dark Shadows series, Ross wrote two other vampire novels under the pseudonym Clarissa Ross, Secret of the Pale Lover (1969) and The Corridors of Fear (1971). After the completion of the Dark Shadows series for Paperback Library, Ross published another vampire novel as Marilyn Ross, The Vampire Contessa (1974). He continued his heavy output into the mid-1980s under such names as Marilyn Carter, Rose Dana, Ruth Dorset, Ann Gilmer, Ellen Randolph, Jane Rossiter, and Dana Ross. In 1989 he completed a play titled Phantom Wedding. He considered himself primarily an “entertainer” and “storyteller,” and has developed a large following. His writings are collected and preserved at Boston University. In 1988 he was given an honorary doctorate of letters from the University of New Brunswick. Ross passed away on November 1, 1995.