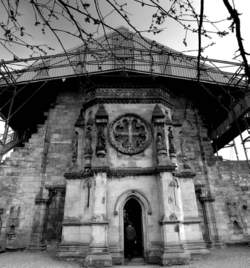 Rosslyn Chapel near Edinburgh, Scotland, is a sixteenth-century church that has become famous for the symbols adorning its interior. Some believe that these symbols hold clues to the location of the Holy Grail or the Ark of the Covenant. Getty Images.

Rosslyn Chapel, more properly called the Collegiate Chapel of Saint Matthew, is a worship center now affiliated with the Scottish Episcopal Church. It is located in the Esk Valley a few miles south of Edinburgh. It is the completed part of what was originally planned to be a much larger church. The church was begun at the insistence of Sir William Sinclair (1410–1484). He left an endowment to continue the work, which continued until 1571, when secular authorities, influenced by the Protestant Reformation, claimed the moneys meant to build an obviously Roman Catholic Church.

For the next century, the Catholic Sinclairs and Protestant authorities argued about the chapel. Along the way, in 1650, Oliver Cromwell attacked Rosslyn Castle and desecrated the chapel by using it as a stable. In 1688, a riotous mob further vandalized the building. It lay abandoned until 1736, when it was restored. Services now related to the Episcopal Church (the Scottish equivalent to the Church of England) began, and in the last-half of the twentieth century recognition of the historical importance of the chapel has undergirded its restoration.

In recent years, Rosslyn Chapel has assumed a prominent role in the alternative history focused upon the Knights Templar. The Templars had become quite wealthy, and some speculate that those knights who came to Scotland brought a significant amount of their treasure with them. Some of that treasure had been accumulated when the original members of the order were in Jerusalem on a Crusade. According to this story, King Philip the Fair of France (1268–1314) tried to suppress the Templars, but some of the group escaped and found refuge in Scotland. Here they came into contact with Sir Henry Sinclair (d. c.1400), whose lands included Rosslyn. Sinclair, working with Italian sailor and explorer Carlo Zeno (1334–1418), had actually discovered North America in the 1390s, having landed at Oak Island, Nova Scotia, in 1396.

Rosslyn Chapel was begun by Sir Henry’s grandson, Sinclair, a half century after Sinclair’s reputed voyage to Canada. His grandson assumed a significant role in directing the architects to include a variety of oddities into the design and decoration of the building. Much of its value today relates to the symbolism adorning the interior. For example, the ceiling includes a number of obscure symbols about which many have speculated. A prize of £5,000 has been offered to anyone who can decipher their meaning. The chapel also boasts the largest number of Green Mancarvings of any European medieval chapel.

However, the primary speculations about the chapel concern the possibility that treasure lies in its crypt—possibly even the Ark of the Covenant or the Holy Grail. Among the evidence cited to support these claims is the resemblance of the chapel’s floor plan to that of Herod’s Temple in Jerusalem. If the Templars brought items plundered from under the temple in Jerusalem, a chapel modeled on the temple would be an appropriate resting place. The speculation about Rosslyn became another element of Templar history integrated into the best-selling novel, The Da Vinci Code (2003).

Knight, Christopher, and Robert Lomas. The Hiram Key: Pharaohs, Freemasons and the Discovery of the Secret Scrolls of Jesus. Rockport, MA: Element Books, 1997.
Laidler, Keith. The Head of God: The Lost Treasure of the Templars. London: Weidenfeld & Nicolson, 1998.
Ralls, Karen. The Templars & the Grail: Knights of the Quest. Chicago: Quest Books, 2003.
Wallace-Murphy, Tim. The Templar Legacy & The Masonic Inheritance within Rosslyn Chapel. Rosslyn, Scotland: “The Friends of Rosslyn,” n.d.
The Encyclopedia of Religious Phenomena © 2008 Visible Ink Press®. All rights reserved.

Feedback
Flashcards & Bookmarks ?
Please log in or register to use Flashcards and Bookmarks. You can also log in with
Flashcards ?
My bookmarks ?
+ Add current page to bookmarks
Mentioned in ?
References in periodicals archive ?
Apart from providing a much-needed tourism boost for communities, this colliding of worlds adds a little extra excitement to visiting some of our county's iconic attractions - something I encountered just the other week while on an outing to the beautiful Rosslyn Chapel.
Give Hanks for the chapel of superb scones
AN AMATEUR codebreaker who helped to crack a mystery hidden in the walls of Rosslyn Chapel has died.
CODEBREAKER DIES; father& SON SOLVED DA VINCI RIDDLE Rosslyn decrypter passes away
With beaches and historic landmarks - including Rosslyn Chapel and Ratho's Canal - on the doorstep, three of CALA Homes (East) developments boast stunning views in locations perfect for summer living.
Make your move on summer hotspots
Compiled and written by medieval historian Karen Ralls (who served as the Deputy Curator of Art at the Rosslyn Chapel from 1996 to 2001), "Medieval Mysteries: A Guide to History, Lore, Places and Symbolism" is a beautifully illustrated, 304 page, compendium that showcases a series of medieval groups and beliefs that range from the Knights Templar; Mary Magdalene; The Black Madonna; The Holy Grail; and the Cathars; to Medieval Guilds; heretics and heresy; the Troubadours; King Arthur; and the Rosslyn Chapel.
Medieval Mysteries
In The Da Vinci Code, Dan Brown fictionally speculates that the Holy Grail lies buried in the crypt of Rosslyn Chapel, near Edinburgh.
More twists from Meltham thriller novelist; Advertise here? Contact MAUREEN CLARK Call: 01484 437706 email: maureen.clark@examiner.co.uk
This documentary examines the possibility of Rosslyn Chapel in Midlothian being the final resting place of the Holy Grail, and attempts to find out the secrets behind Leonardo da Vinci's mirror writing.
TV CHOICE
By the time we arrived in the picturesque village of Roslin in southeast Scotland, site of the famous Rosslyn Chapel, a mega energetic vortex and another reputed Holy Grail location, I was still questioning whether the grail existed.
Ancient wisdom of Avalon: writer Dana Micucci revisits Camelot in her own quest for the elusive holy grail
He also built the nearby Rosslyn Chapel, described as one of the wonders of Scotland.
HORSE PLAY Just for the [...]
Hanks and his crew filmed for a week at Rosslyn Chapel in 2005, but found the Midlothian church in poor condition and used a model to film at least one scene.
Hanks to God; STAR'S CASH AIDS ROSSLYN
London, Feb 08 (ANI): Actor Tom Hanks has made a cash donation to help restore Rosslyn Chapel, where he shot a part of his film 'The Da Vinci Code.'
Tom Hanks donates to help restore Rosslyn Chapel
DECEMBER 7-10 & 12: Medieval Rosslyn Chapel in Midlothian (as seen in the Da Vinci Code) is the setting for a new adaptation of Charles Dickens' A Christmas Carol.
Great UK days out
In anticipation of the book, Freemasons are supposedly planning security precautions to safeguard against " the Rosslyn effect", referring to when Rosslyn Chapel ( where the descendants of Christ and Mary Magdalene reside according to Dan Brown) was deluged by treasure hunters and grail seekers in the aftermath of The Da Vinci Code .
THE BOOK THAT MAY OVERTURN PUBLISHING FORTUNES