Rotation of the Earth

Rotation of the Earth

one of the earth’s motions. The earth’s rotation is the basis for the explanation of day and night, of the apparent daily motion of celestial bodies, and of certain phenomena occurring on the earth’s surface, such as the rotation of the oscillation plane of a weight sus-pended on a string (Foucault pendulum) and the deflection of falling objects toward the east. Because of the earth’s rotation, a Coriolis force acts on objects moving on the sur-face; this force’s effect appears in the washing away of the right banks of rivers in the northern hemisphere and of the left banks in the southern hemisphere (Baer’s law) as well as in certain features of atmospheric circulation. The centrifugal force caused by the earth’s rotation partially explains the differences in the acceleration of gravity at the earth’s equator and poles.

To study the laws of the earth’s rotation, two systems of coordinate axes are used with a common origin O at the earth’s center of mass: (see Figure 1): one system moves with the earth (X1Y1Z1) and the other is stationary (XYZ). The plane XOY of the stationary system is made to coincide with the plane of the ecliptic at the initial epoch (a moment of time is taken as the initial moment); the OX axis is directed toward the vernal equinox of this epoch. It is convenient to use the earth’s principal axis of inertia as the X1 Y1 Z1 axes of the moving system, although, depending on the problem being studied, other axes can also be used. The position of the X1 Y1 Z1 system relative to the XYZ system is customarily denoted by the three Euler angles: ψ,and Φ 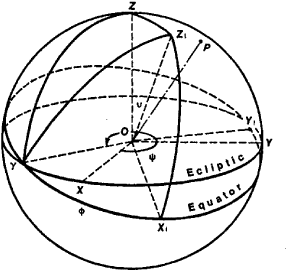 Most information about the earth’s rotation is provided by observations of the daily motions of celestial bodies. Observation has established that with respect to the vernal equinoxial point, the earth completes one rotation per sidereal day (approximately 23 hr 56 min 4 sec of mean solar time). The earth’s rotation proceeds from west to east, that is, counterclockwise as viewed from the north pole. The earth’s axis of rotation does not maintain a fixed direction in space. It moves so that the average inclination (9) of the equator to the ecliptic of the initial epoch is almost constant (in 1900, it was 23°27’8.26“, and during the 20th century it will increase by less than 0.1”). The line of intersection of the equator and the ecliptic of the initial epoch (nodal line) slowly moves along the ecliptic from east to west, shifting by 1°13’57.08” in one century, as a result of which angle ψ changes by 360° in 25,700 years. Thus, the OP axis describes a conic surface around the perpendicular to the plane of the ecliptic (precession). In addition, the OP axis performs a number of oscillations in space with periods ranging from several days to 18.6 years (nutation). Relative to the earth’s axis of rotation, the earth itself performs small oscillations. The instantaneous axis of rotation OP almost always coincides with the smallest axis of the earth’s ellipsoid of inertia 0Zi;-the angle between these axes has not exceeded 0.4” from observations made since the end of the 19th century.

Up to the beginning of the 20th century, it was assumed that the earth rotated uniformly, and its period of rotation was used as a natural time unit. The time interval between two successive coincidences of the OX1 axis with the nodal line Oy, during which the angle Φ increases by 360°, was called the sidereal day. Owing to the rotation of the line Oy itself, the sidereal day is 0.0084 sec shorter than the period of the earth’s rotation. However, precise analysis of position observations of the sun, moon, and planets has shown that the earth’s rotation proceeds nonuniformly and that the length of the sidereal day varies. Tidal friction slows the earth’s rotation, as a result of which the day’s length increases gradually; in the last 2,500 years, it has increased an average of 0.0024 sec per century. Periodic variations in the earth’s velocity of rotation also occur: annual and semiannual variations connected with seasonal meteorological phenomena and monthly and semimonthly variations caused by tidal deformations owing to the gravitational action of the moon. Because of the annual variations of the earth’s velocity of rotation, a day in January is approximately 0.001 sec longer than a day in July. “Abrupt” variations in the earth’s velocity of rotation have also been detected whereby the day’s length decreases or increases by several thousandths of a second over 1-3 years. The most significant of them occurred in 1864, 1876, 1898, and 1920. Their cause has not been definitively established.

Feedback
Flashcards & Bookmarks ?
Please log in or register to use Flashcards and Bookmarks. You can also log in with
Flashcards ?
My bookmarks ?
+ Add current page to bookmarks
TheFreeDictionary presents:
Write what you mean clearly and correctly.
Mentioned in ?
References in classic literature ?
"But looking at the movements of the stars, I can't picture to myself the rotation of the earth, and I'm right in saying that the stars move.
View in context
What is the axis of rotation of the Earth in degrees?
quick QUIZ
This liquid ocean is churned because of the rotation of the Earth, giving rise to the magnetic field of the Earth.
The north magnetic pole is moving, scientists struggle to keep models updated
He explained that the sun does not shine and does not go away on its own, but rather as a result of the rotation of the earth around itself from west to east; therefore, all celestial bodies rise from the east and absent from the west.
Rumors in Egypt reach space .. Institute of Astronomical Research responds
(The moon is what planetary scientists call "tidally locked" to the rotation of the Earth. That is, its period of rotation -- its day -- is the same as the time it takes to make one orbit around earth.)
China launches moon lander Chang'e-4 carrying silkworm eggs
But astronomers base their seasons around the rotation of the Earth and its relation to the orbit of the sun - meaning that the dates change slightly each year.
Autumn of 'BBQ conditions' on the way
The rotation of the Earth causes the stars to trail out when captured over two hours Dan Pye
Astronomers' pictures are just out of this world
Bashir Marzouk, astronomer at the Qatar Calendar House, the summer solstice and the rest of the four astronomical seasons occur as a result of the rotation of the Earth around the Sun, in addition to the axis of the Earth at the level of its orbit at an angle of 23.5 degrees.
Thursday will be longest day of 2018 in Qatar
The warm and cold air, combined with the rotation of the earth produce strong winds that rotate counterclockwise (like a cyclone) in the Northern Hemisphere.
Balmy Weather At The North Pole!
We normally launch our rockets from our Guyana Space Centre in Kourou in French Guyana because it is very close to the equator and that makes it easier to manoeuvre a spacecraft or a satellite into a geostationary orbit that follows the rotation of the Earth along the equator." Debris "It has a lot of open sea to the east.
Mars mission to help fuel Euro space ventures
"The rotation of the Earth does change slightly 6 by a millisecond a day sometimes 6 and that can be measured very accurately by atomic clocks," noted Bilham.
Earthquakes Will Double In Number In 2018, Scientists Warn
Abu Dhabi Students of NYU Abu Dhabi have scaled new heights by using the Burj Khalifa as a tool for scientific enquiry to track its imposing shadow and study the rotation of the Earth.
NYU AD students scale new heights, track Burj shadow