(rŭstĭkā`shən), in building construction, method of creating textures upon masonry wall surfaces, chiefly upon those of stone, by projecting the blocks beyond the surface of the mortar joints. Each joint thus lies in a channel or in a V-shaped groove, between adjoining stones, and a separating shadow line is produced. The degree of projection, whether slight or bold, permits varying effects. The Romans occasionally built rusticated walls. This device was used by Renaissance architects in the palace facades at Florence, a favorite treatment being that of a ground floor with stones of strong projection and roughly textured surface, surmounted by upper stories in which both forms were more refined. Often columns and pilasters also were rusticated. The basement story of the Pitti Palace (mid-15th cent.) exhibits a celebrated example of rustication, some of its enormous and roughly quarried blocks of stone projecting as much as 2 ft 6 in. (76.2 cm) beyond the surface of the joints. The garden architecture of the Italian baroque villavilla.
Although used to designate any country residence, especially in Italy and S France, the term villa particularly refers to a type of pleasure residence with extensive grounds favored by the Romans and richly developed in Italy in the Renaissance.
..... Click the link for more information.  shows many grotesquely textured examples. Rustications also appeared frequently in the Georgian style and in American Colonial architecture.
The Columbia Electronic Encyclopedia™ Copyright © 2013, Columbia University Press. Licensed from Columbia University Press. All rights reserved. www.cc.columbia.edu/cu/cup/

Masonry cut in large blocks with the surface left rough and unfinished, separated by deep recessed joints. The border of each block may be beveled or rabbeted on all four sides or top and bottom. It is used mainly on the lower part of a structure to give a bold, exaggerated took of strength.

in architecture, the facing of a building with crudely cut or convex stones. Enlivening the wall with a rich play of light and shadow, rustication gives a building a sense of massive strength. In a plastered facade, rustication is simulated by dividing the wall into rectangles or stripes. 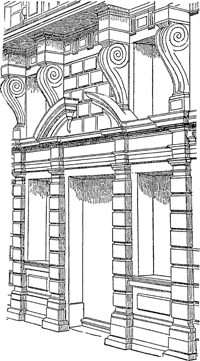