term sometimes used to designate the larger species of snakessnake,
common name for an elongated, limbless reptile of the order Squamata, which also includes the xlizards. Most snakes live on the ground, but some are burrowers, arboreal, or aquatic; one group is exclusively marine. In temperate climates they hibernate.
..... Click the link for more information.  in mythology and folklore, a name often applied to any sinuous, crawling creature, chiefly to a snake. No sea serpents have been discovered to substantiate the legends about them, although some accounts, such as stories of the so-called Loch Ness monster in Scotland, have received wide publicity. Large squids, octopuses, whales, dolphins, seals, and other sea animals are sometimes described as sea serpents. In religion and art, the serpent sometimes symbolizes Satan (Rev. 20.2), or the phallus (see phallic worshipphallic worship
, worship of the reproductive powers of nature as symbolized by the male generative organ. Phallic symbols have been found by archaeological expeditions all over the world, and they are usually interpreted as an expression of the human desire for regeneration.
..... Click the link for more information. ). See also dragondragon,
mythical beast usually represented as a huge, winged, fire-breathing reptile. For centuries the dragon has been prominent in the folklore of many peoples; thus, its physical characteristics vary greatly and include combinations of numerous animals.
..... Click the link for more information. . 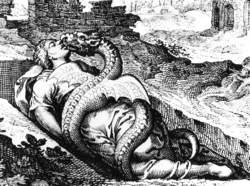 Detail of Atalanta Fugiens, by Maier, 1618, showing Venus being strangled by a serpent in the grave. Courtesy Fortean Picture Library.

Snakes were considered immortal by virtue of renewing themselves, apparently indefinitely, through shedding their skin. The serpent is one of the oldest symbols of female power, and it is a lunar symbol. Both serpents and women were considered holy in pre-classic Aegean civilization, since both seem to embody the power of life. In Egypt and India, the first serpent was depicted as a totemic form of the Great Mother herself. In India, the Goddess of the Earth and "Mother of All That Moves" often bore the title Sarparajni, or "Serpent Queen." In ancient Egypt, the serpent-mother Iusaset—or Per-Uatchet, according to the Pyramid Texts—was the Celestial Serpent whose symbol, the uraeus, meant both "serpent" and "goddess." Gaea, or Gaia, the Earth Goddess and mother of all the gods, was originally a serpent, Gaea Pelope, referred to by Hesiod.

In Wicca, of those traditions that have a degree system, a Witch Queen or Queen of the Sabbat wears a silver-buckled garter as a badge of office. This garter is traditionally made of green snake skin and lined with blue silk. In Hedge Witchcraft, snake skin is regarded as a cure for rheumatism. In Kentucky and the Ozark region of Missouri and Arkansas, it is thought that the rattles from a rattlesnake can be powdered to make a drink that will give a mother an easy birth. It is also thought that wearing the rattles as a head ornament will cure a headache.

The Gnostics masculinized the serpent and called it Ophion, the Aeon of Light, or Helios. Worshipers were known as the Brotherhood of the Serpent. Several other mythologies had a Tree of Knowledge, or Tree of Life, that was guarded by a serpent. Gnostic mysticism turned the Great Serpent into Ouroboros, who lived forever in the uterine underworld. The symbol of Ouroboros is a serpent biting its own tail and forming a circle—a never-ending figure. The Naasenes also adopted the symbol of the serpent—naas meaning "snake."

P. Z. Goldberg says that at Tamburbrin, a married woman need only to enter the place where the serpent dwelt to become pregnant, for the serpent was regarded as the source of all generation. Within the temple, the serpent might assume human form and "bless the woman worshiper with his divine sexual presence." The offspring resulting from this union were known as the "Children of the Snake." Goldberg also says, however, that "in the execution of the sexual function. . . the priest represented the serpent."

The snake represents ley lines, "dragon lines," or "earth lines"—lines connecting sites of great power and cosmic energy. Many myths of subduing a great serpent—for example, the legend of St. George and the dragon—are probably connected to the idea of mastering powerful earth powers. In Britain there are a number of sites bearing names associated with this serpent power: Serpent Hill, Hagpen (hag was an old name for snake; pen meant hill), Hackpen (a variation on hag), Worm Hill (worm was an old word for snake or dragon), and Dragon Hill. The monument at Avebury, Wiltshire, with its two stone circles, is approached by an avenue of stones connecting it to another site, the Sanctuary. This site is on a hill known as Hagpen. William Stukely and others have interpreted this avenue as evidence of a serpent cult.

The dragon was a variation on the serpent and is found universally. It is a bringer of fertility and is sometimes depicted with foliage springing from its tail and even bunches of grapes or fruit issuing from its mouth. The dragon had strong connection with fertility. Janet and Colin Bord, in Ancient Mysteries of Britain, suggest that there are a "number of legends telling of hoards of treasure watched over by dragons, and we wondered whether in such cases the dragon was a symbol of the earth energy which prehistoric men might have utilised—an energy which, if carelessly handled, could cause havoc and destruction just as the dragons do in the traditional tales."

Several writers have suggested that the White Horse of Uffington (a huge figure carved into the white chalk of the hills of Oxfordshire) might not be a depiction of a horse but of a dragon. The fact that there is a round hump close by that is named Dragon's Hill would seem to lend support for this theory. Dragon's Hill is a mound where, as legend has it, St. George slew the dragon. In fact, this is a reworking of an earlier legend of the archangel Michael, who was set up by the early Christian Church to guard the sacred hills previously dedicated to the pagan god Bel.

The Kundalini energy of yoga is called the serpent energy, symbolizing a snake coiled within the human body. Its awakening and uncoiling activate the chakras, which are the energy centers of the body. Mircea Eliade, in Mystische Reste in der Paradiesarzahlung, Archiv. F, Ref. X, 345, points to numerous Middle Eastern deities who are frequently depicted with snakes in their hands (for example, Artemis, Hecate, Persephone, the Cretan Snake Goddess, Medusa, and the Erinyes). Some statues of Vishnu in India show him sleeping in the shade provided by the seven heads of the snake god Sesha.

The Nâgas were a fabulous race of snakes in the mythology of India. Statues show them with human bodies and long, twisting tails. They were believed to be among the ancestors of certain royal families. Statues of them are still worshiped in areas of southern India. Wives of Nâgas are known as Nâginis.

On St. Bride's Day, in Scotland, a verse is repeated in a hymn, showing that the serpent represents earth energy: Early on Bride's morn The serpent shall come from the hole. I will not molest the serpent, Nor will the serpent molest me.

an old wind instrument, consisting of a serpentine, conical, metal or wooden tube and a cup-shaped mouthpiece. Invented in France in the 16th century, the serpent went out of use in the 19th century.

What does it mean when you dream about a serpent?

1. a literary or dialect word for snake
2. Old Testament a manifestation of Satan as a guileful tempter (Genesis 3:1--5)
3. an obsolete wind instrument resembling a snake in shape, the bass form of the cornett

Feedback
Flashcards & Bookmarks ?
Please log in or register to use Flashcards and Bookmarks. You can also log in with
Flashcards ?
My bookmarks ?
+ Add current page to bookmarks
TheFreeDictionary presents:
Write what you mean clearly and correctly.
Mentioned in ?
References in classic literature ?
He spent whole days--indeed, it was his sole occupation--in communing with the serpent. A conversation was sustained, in which, as it seemed, the hidden monster bore a part, though unintelligibly to the listeners, and inaudible except in a hiss.
He had just thrown a book upon the grass, where it lay half opened, thus disclosing itself to be a natural history of the serpent tribe, illustrated by lifelike plates.
"Could I for one moment forget myself, the serpent might not abide within me.
Roderick Elliston, whether the serpent was a physical reptile, or whether the morbidness of your nature suggested that symbol to your fancy, the moral of the story is not the less true and strong.
"The serpent was but a dark fantasy, and what it typified was as shadowy as itself.
That is the way of such serpents. I have learned the whole nature of them from my own!"
"You see," observed Elliston, pointing to the book of serpents, while a smile gleamed upon his lips, "I am making an effort to become better acquainted with my bosom friend; but I find nothing satisfactory in this volume.
View in context
How dies the Serpent? hee hath eat'n and lives, And knows, and speaks, and reasons, and discernes, Irrational till then.
Back to the Thicket slunk The guiltie Serpent, and well might, for EVE Intent now wholly on her taste, naught else Regarded, such delight till then, as seemd, In Fruit she never tasted, whether true Or fansied so, through expectation high Of knowledg, nor was God-head from her thought.
But strange Hath bin the cause, and wonderful to heare: This Tree is not as we are told, a Tree Of danger tasted, nor to evil unknown Op'ning the way, but of Divine effect To open Eyes, and make them Gods who taste; And hath bin tasted such; the Serpent wise, Or not restraind as wee, or not obeying, Hath eat'n of the fruit, and is become, Not dead, as we are threatn'd, but thenceforth Endu'd with human voice and human sense, Reasoning to admiration, and with mee Perswasively hath so prevaild, that I Have also tasted, and have also found Th' effects to correspond, opener mine Eyes, Dimm erst, dilated Spirits, ampler Heart, And growing up to Godhead; which for thee Chiefly I sought, without thee can despise.
Not God omnipotent, for Fate, yet so Perhaps thou shalt not Die, perhaps the Fact Is not so hainous now, foretasted Fruit, Profan'd first by the Serpent, by him first Made common and unhallowd: ere one tastes; Nor yet on him found deadly; he yet lives, Lives, as thou saidst, and gaines to live as Man Higher degree of Life, inducement strong To us, as likely tasting to attaine Proportional ascent, which cannot be But to be Gods, or Angels Demi-gods.
What words have past thy Lips, ADAM severe, Imput'st thou that to my default, or will Of wandering, as thou call'st it, which who knows But might as ill have happ'nd thou being by, Or to thy self perhaps: hadst thou bin there, Or bere th' attempt, thou couldst not have discernd Fraud in the Serpent, speaking as he spake; No ground of enmitie between us known, Why hee should mean me ill, or seek to harme.
View in context