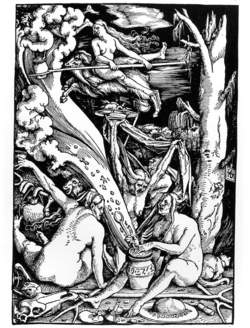 From the Old French s'ebattre, "to revel or frolic," the word sabbat is applied to the main festivals of Witchcraft. There are eight such festivals, spread more or less equidistant throughout the year. They mark the agricultural and solar divisions of the year.

Originally the year was divided into two parts, summer and winter. During the summer, when it was possible to grow food, the Goddess predominated as a goddess of fertility, looking over the crops and the flocks and herds. But in the winter months, before humankind learned to store food, reliance on successful hunting became the main preoccupation, and the God predominated as a god of hunting and death. The divisions of the year occurred at May eve and November eve, known as Beltane and Samhain (pronounced sow'n, to rhyme with cow), and these divisional points became times for the pagans to celebrate the shift of emphasis between the deities. Later, additional celebrations were added halfway through each of these periods, marking that mid-point and also acknowledging specific occasions in the agricultural year. These mid-points were named Imbolc (February eve) and Lughnasadh (August eve). These four festivals are known by today's modern Witches as the four Major or Greater Sabbats.

Eventually, the sun festivals were added to these agricultural ones: the summer and winter solstices and the spring and autumn equinoxes, known as the Minor or Lesser Sabbats. Margaret Murray suggests that the equinoxes were never observed in Britain, although more recent research has revealed that they were observed by the pre-Celtic Megalithic people of Britain.

With all of the old festivals, celebrations began on the eve of the date and invariably continued throughout the night until the following sunrise. Fertility was the main theme. Indeed, for the Beltane Sabbat, modern Witches have adopted a version of a Rudyard Kipling rhyme: Oh, do not tell the priests of our rites, For they would call it sin, But we will be in the woods all night A-conjuring summer in!

At a trial in Toulouse in 1335, there was mention of a sabbat. In 1440 there was a report of an old woman who claimed to have attended sabbat celebrations since she was sixteen. The word itself began to appear regularly in the fifteenthcentury records. Certain locations in Europe were traditionally associated with witches' sabbats. In the Carpathian Mountains is a peak known as the Old Women's Mountain, believed to have been a sabbat site. In France a traditional site was the Puy de Dôme. In Germany were the Horselberg, Huiberg Mountain, and the Köterberg. In Italy were the Paterno di Bologna and Tossale di Bergamo.

The feast was a major part of the sabbat celebrations. Sabbats were frequently large affairs, often held by a number of covens coming together from the surrounding neighborhood. At St.-Dié, in France, anywhere from fifty to 100 witches were supposed to be in attendance, while in Italy Bartolommeo Spina (writing in the sixteenth century) was told of as many as 6,000 at one gathering. Traveling to the sabbat site, the Witches would bring food to enjoy after their journey and before the religious ritual. Live poultry might be driven along with them, then cooked there. One large cooking pot, or cauldron, would be carried. It would be filled with water from a nearby stream and local wild herbs (see the article on Herbs, regarding names of plants). An early reference to the sabbat feast is found in the records of the trials of the Lancashire witches in 1612. A meeting was held at Old Mother Demdike's home, known as Malking Tower (Malking, or Malkin, was a favorite name for a witch's cat, often thought to be a familiar). It was reported that the gathered witches feasted on mutton from a stolen sheep, drank ale, and plotted to blow up the local castle to rescue their relatives, held captive there on a charge of witchcraft. Although this feast took place indoors, it was similar to the majority of later sabbat feasts. Even today, modern Wiccans will have a feast—usually a "potluck"—at the sabbats.

Witches supposedly traveled to the sabbat by riding naked astride broomsticks that flew through the air. This story came about from a mixing of various pieces of propaganda promulgated by the early Christian Church in its attempt to discredit the old religion. One of the old forms of sympathetic magic, designed to promote fertility of the crops, was for the pagans to go to the fields with their broomsticks, pitchforks, and poles. Riding them astride, like hobby-horses, they would dance around the fields, leaping up in the air as they danced. The belief was that the higher they jumped, the higher the crops would grow. This sparked the idea of pagans or witches riding their poles, forks, and brooms through the air to their meeting sites. Certainly such a distortion made good anti-pagan propaganda for the early Church, who could claim it was the work of the devil.

Not all reported sightings of witches' sabbats were well founded. It was a common practice for Gypsies to camp at a crossroads. Many times they would feast, dance, and sing into the late night. A traveler might well chance on a such a gathering and assume it to be a witches' sabbat.

Eight times a year, on the solstices, equinoxes, and Cross-Quarter Days
The eight Sabbats are the major holidays celebrated by members of the various Neopagan religions that have flourished in the United States since the mid-1960s. Although normally observed on the Vernal Equinox, Summer Solstice, Autumnal Equinox, Winter Solstice, and Cross-Quarter Days (February 1, May 1, August 1, and November 1), the Sabbats may sometimes be displaced from their traditional dates in order to fall closer to that of a specific Neopagan festival.
Since 1970, the outdoor celebration of Sabbats in the United States has increased in popularity on both the local and national levels. Although local gatherings may attract a few hundred people, there is now an annual cycle of festivals—approximately one for each Sabbat in each major region of the United States—that is regularly attended by thousands of Neopagan adherents. The Sabbat ritual typically combines drama, poetry, music, costume, and dance.
SOURCES:
RelHolCal-2004, p. 268
Holidays, Festivals, and Celebrations of the World Dictionary, Fourth Edition. © 2010 by Omnigraphics, Inc.