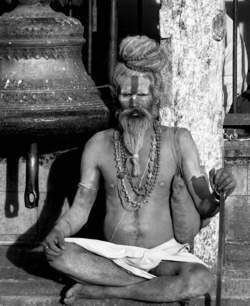 Hindu ascetics known as sadhus, such as this man in Kathmandu, Nepal, dedicate themselves to the pursuit of enlightenment through a life of isolation, self-deprivation, and feats of physical endurance. AFP/Qetty Images.

A sadhu (literally, “forest dweller”) is a Hindu ascetic who leaves worldly pursuits to concentrate on religious goals. There are an estimated four to five million residing in India, and they represent an aspect of Hinduism that has not been exported to the West. Sadhus renounce “the world” in order to focus entirely on enlightenment and the life beyond death. They cut family ties, possessions, and home from their lives. They wear little or no clothing and eat what little food they are given or can scrounge from the countryside. Sadhus tend to live by themselves, spending their days in devotion to their chosen deity, though they will often show up in great numbers for large traditional festivals such as the Kumbh Mela.

Sadhus represent the more extreme forms from the entire spectrum of the Hindu religion with its numerous deities and multitude of techniques to reach the desired religious goals. Different sadhus will spend most of their waking hours in the practice of austerities, forms of yoga, or techniques of meditation that an average believer might practice for a short time daily or weekly. The most extreme behaviors involve the adoption of a posture that will be maintained day and night for many years—this often leads to the degeneration of parts of the body. Some sadhus go naked and rub their bodies with ashes (a symbol of death and rebirth). Others refuse to cut their hair, and like the Biblical Samson, think of their hair as the basis of supernatural power. The extreme practices usually have their basis in the activities of the deities as described in the Hindu holy books. The appearance of the sadhu—marks on the forehead, the color of any clothing, etc.—gives clues as to the deity that is being honored.

Most sadhus are celibate, having renounced sex along with other aspects of ordinary life. However, some from the tantric traditions do engage in sex as a means of enlightenment. Also, many are known for their injections of various mind-altering drugs, such as marijuana, which, like sex, can become a tool to speed enlightenment. The god Shiva is especially identified with charrus (hash). The sadhu should be distinguished from the sanyassin (renouncers), who take a formal vow to renounce everything, including sex, family, and even their names.

There are a few female sadhus, known as sadhvis, too. Most of these are older women, usually widows. Being a sadhvi is one of the few possible pursuits for widows in traditional Hindu society. Sadhus are overwhelmingly male, however, and many of the groups to which they belong do not allow women to associate with them. In recent decades, a few non-Indians have adopted the sadhu life, as well.

Included among the sadhus are some who are referred to as FAKIRS, who make their living by demonstrating various unusual yogic feats or stage shows of magic. These are often passed off as demonstrations of miraculous feats.

Feedback
Flashcards & Bookmarks ?
Please log in or register to use Flashcards and Bookmarks. You can also log in with
Flashcards ?
My bookmarks ?
+ Add current page to bookmarks
Mentioned in ?
References in periodicals archive ?
One who wants to become a Sadhu must first find a Guru capable of guiding him along the way.
THE JEWISH NAZIRITE AND THE HINDU SANYASIN: CHALLENGE, SOCIOLOGY, AND THEOLOGY
Large gathering Over 20,000 people, including sadhus, reportedly gathered at Town Hall Ground and proceeded towards Dashashwamedh Ghat while shouting "Har Har Mahadev ".
Cops & seers clash on PM's home turf
The crush was believed to have been triggered when a sadhu, or holy man, threw coins into a crowd of pilgrims who were growing increasingly impatient at having to wait for their turn to bathe.
Tens of thousands take holy dip at India's Kumbh Mela
Many believe India's sadhus and yogis were formalised into a monastic order -- Order of the Sanyasis or renunciates -- by the 5th-century BC Hindu philosopher Adi Shankaracharya.
From Beverly Hills to Himalayan foothills
This is pertinent for an event like the Kumbh Mela, where prospective tourists are warned that they risk exposure to "malaria, Giardia, tuberculosis, food poisoning, water contamination, Being trampled by Naked Sadhus, hepatitis, typhoid, rabies, Japanese encephalitis and plague," (11) simply by turning up.
Seeing, being seen, and not being seen: pilgrimage, tourism, and layers of looking at the Kumbh Mela
Held every 12 years, it attracts millions of Sadhus from across India, seeking spiritual enlightenment by bathing in the River Ganges.
Heddiw ar S4C Today on S4C
On the other, as coarser householder-magicians, they were able to purvey the earthy, powerful magic to which kings wanted access both actual and visible.(8) In Nepal, where the Naths have been aligned with a dynasty that is still powerful, Nath householders and sadhus still seem conceived as a single community.(9) The two have more visibly diverged in Rajasthan - where princes have not always patronized Naths, and those that did found their power drastically diminished through British rule and independence.
Nath Yogis as established alternatives: householders and ascetics today
On Tuesday, Singh, who is contesting the ongoing polls from Bhopal, performed a 'havan' in the presence of Computer Baba and other sadhus at a Maha Yagna organised in Bhopal.
Police personnel at Digvijaya's roadshow 'forced' to sport saffron scarves
Prayagraj: The Kumbh Mela, which kicked off early on Tuesday with thousands taking a dip at the confluence of Ganga and Yamuna rivers and the mythical Saraswati, is seeing numerous sadhus and mystics, whose varied looks and practices are evoking curiosity among those who have descended on this historic city.
'Selfie baba', 'foreigner baba' among Sadhus, mystics evoking curiosity at Kumbh Mela