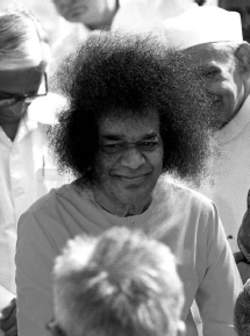 Indian guru Sai Baba is the controversial leader of the Prasanthi Nilayam ashram. His claims to performing miracles have been attacked by numerous critics, and in 1993 an attempt was reportedly made on his life. AFP/Qetty Images.

Sai Baba is one of the most popular (and controversial) of contemporary Indian spiritual teachers (gurus). He heads what is claimed to be the largest ashram in the country. Sai Baba was born Satyanarayan Raju in the small village of Putta-parthi, Andra Pradesh. Biographical details of his early life are scant (and even his birth date is in doubt), but according to official sources, when he was 14 he began to behave in such a way as to make his family and fellow villagers believe he was possessed by a demon. Satyanarayan countered the accusation by saying that he had in fact been visited by the spirit of Sai Baba of Shirdi (1856–1918), the much-admired miracle-working guru of Maharashtra. The previous Sai Baba had been revered as a perfect master and a bhagwan (blessed one), a common title given to the most honored of teachers signifying that their level of wisdom is like that of a deity (a concept often difficult for westerners to grasp) and avatar (incarnation of divinity).

Sai Baba emerged as a popular teacher, and he soon out-performed his contemporaries with his miracles. His common miracles included materializing small objects for his followers, most often some vibhuti (sacred ash), and on occasion he caused valuable objects such as gold jewelry to appear. Numerous healings are attributed to him, too, as well as at least two resurrections of dead people.

Sai Baba established his ashram, Prasanthi Nilayam, at Anantapur, Andra Pradesh. It is currently managed by the Sri Sathya Sai Central Trust, which was formally organized in 1972. Through the trust, Sai Baba has led the Sri Sathya Sai Institute of Higher Learning, which became a university in 1981. More recently, he founded the Sri Sathya Sai Institute of Music, located in his hometown of Puttaparthy. He has inspired the opening of several hospitals, while also establishing a wide spectrum of services to minister to the poor. Evidence of the size of his following was clearly indicated when a modern airport had to be constructed near the ashram in order to facilitate the transportation needs of the millions coming to Prasanthi Nilayam.

Though the recipient of many honors and the support of government officials, Sai Baba has become the target of numerous critics. The most extreme critics charge that his miracles are merely stage magic. The Indian Committee for the Scientific Investigation of the Claims of the Paranormal, headed by the now-famous “Anti-Guru,” B. Premanand, have continually attempted to expose Sai Baba’s often crude attempts to “materialize” objects by using sleight of hand. Though the evidence for trickery on Sai Baba’s part is substantial, it has done little to lessen his support, at least in India.

Sai Baba has also been attacked by some close former devotees, young men who claim that he abused them sexually. Then on June 6, 1993, six residents of Prashanti Nilayam, including Radha Krishna Menon (one of the people implicated in assisting Sai Baba with his fake miracles), were killed in Sai Baba’s bedroom. Police later claimed that four were assailants attempting to assassinate Sai Baba, and two were killed protecting their guru.

The critiques of Sai Baba have helped make way for a would-be rival. A young guru, Bala Wsai Baba, has established himself in the Kurnool district of Andhra Pradesh. He also claims to perform miracles and has attracted a substantial following, though nothing like the more famous Sai Baba.

Feedback
Flashcards & Bookmarks ?
Please log in or register to use Flashcards and Bookmarks. You can also log in with
Flashcards ?
My bookmarks ?
+ Add current page to bookmarks
TheFreeDictionary presents:
Write what you mean clearly and correctly.
Mentioned in ?
References in periodicals archive ?
According to Das Ganu, Sai Baba was born in Selu, a village in the dominions of the Muslim ruler of Hyderabad.
Sai Baba: The Double Utilization of Written and Oral Traditions in a Modern South Asian Religious Movement
He said the feat was performed by guru Sai Baba when the Duchess visited him at Puttaparthi, in India.
Fergie has a magic moment
Summary: New Delhi [India], Apr 5 (ANI): UPA chairperson Sonia Gandhi's son-in-law and businessman Robert Vadra on Thursday visited the Sai Baba Temple at Lodhi Road here.
Delhi: Robert Vadra visits Sai Baba Temple
It is visited by thousands of devotees of Shri Sai Baba every year.
SpiceJet starts flights between Shirdi to New Delhi
New Delhi, June 11 -- Daily blood donation facility is being provided at the famous Sai Baba temple at Shirdi.
Like Hair Donation at Tirupati, Blood Donation at SHIRDI.Daily
Sai Baba had thousands of followers in India and many more in other parts of the world.
How the past affects our present life
But the author, who also describes himself as a channel of Sai Baba of Shirdi, just doesn't care.
VOICE OF THE FAITHFUL
Mumbai: One of India's largest ashrams for pilgrims visiting the Sai Baba Temple in Shirdi, Ahmednagar district, about 285 km from Mumbai, will be thrown open to the public on November 16 after the President of India Pranab Mukherjee inaugurates the new facility.
India president to inaugurate new Sai ashram
a startling revelation that Sai Baba who considered himself as an incarnation of God
Golden Babas and Silver Swamies
An army of followers descended on a south Indian town to pay their last respects to the spiritual guru Sathya Sai Baba, amid reports of miracles and hopes of reincarnation.
Thousands pay last respects to Indian guru Sathya Sai Baba amid hopes of miracles, reincarnation [PHOTOS]