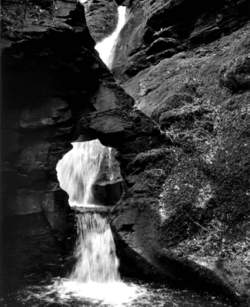 This spring at Saint Nectan’s Glen in England has become a pilgrimage site associated with miracles connected to the death of a faithful sixth-century Welsh nobleman. Fortean Picture Library.

Saint Nectan (c. 458–510) was a legendary saint from the west of England. Little is known of his life, though the stories associated with him appear to derive from memories of his life as a hermit who dedicated himself to assisting those in his neighborhood. He is believed to have been the eldest son of the Welsh king Brychan. As a young man he left home, crossing the Bristol Channel to arrive at Hartland Point in Devon. There he settled in a valley with a pleasant spring. Following the example set by the Egyptian hermit Anthony, he lived by himself and built a small church near the spring. He became well known throughout Devon and Cornwall, areas he helped evangelize.

The most repeated story about Nectan concerns the end of his life. He had helped a local farmer locate some lost pigs, and in gratitude the man presented Nectan with two cows. However, the cows were stolen. Nectan found the bandits and attempted to convert them to Christianity. They responded to his gesture by beheading him. According to the story, Nectan then picked up his head, carried it back to the spring, and then brought it back to the church he had built. This event is said to have occurred on June 17, 510. Other stories suggest King Arthur as the one who slew Nectan. Following his death, two women settled at the spring (some believe them to have been his sisters). They buried him and diverted the water so it flowed over his grave.

In the years after his death, miracles were reported to have occurred where Nectan was buried, and there were annual gatherings of those who venerated the saint. Today there are five chapels dedicated to Saint Nectan in Cornwall and Devon, and his name is attached to holy wells at Ladywell and Welcombe. The chapel fell into disuse and only ruins remain, but pilgrims still find their way to the spring, a spot prized for its natural beauty.