The Salvation Army has established branches in more than 110 countries throughout the world. International headquarters are in London. In the United States, where the movement is strong, headquarters are in Alexandria, Va. The Army's ministers are ranked as officers and its members are called “soldiers”; women have equal position and responsibility with men. High commands may be attained by promotion from lower offices. Each country has its divisions and its local corps, with a commander at the head of all. Officers are prepared in training colleges for their varied responsibilities. In addition to its officers and soldiers, the Army has many more adherents, who regularly worship at its centers, and volunteers, who aid the Salvation Army in meeting community needs.

The Army operates hospitals, community centers, alcoholic and drug rehabilitation programs, emergency and disaster services, social work centers, and recreation facilities. Support of the vast undertakings in all parts of the world depends on voluntary contributions and profits from the sale of publications. The War Cry is the official organ. The beliefs of the Army as set forth in the Handbook of Salvation Army Doctrine (1926) generally agree with those of most Protestant evangelical denominations, but the sacraments of baptism and the Lord's Supper are not considered essential to salvation and are not practiced. Great emphasis is placed on the experience of salvation and purity of life. In conducting the meetings officers are allowed great freedom, as no form of service is required; bands and singing are important features. The Salvation Army distinguished itself by its work with the armed services in both world wars and by its aid to those suffering in disasters, such as floods and earthquakes, all over the world.

The Salvation Army was founded by William Booth, with the assistance of his wife, Catherine Booth. Booth, a Methodist minister, began independent evangelistic work in Cornwall, England, in 1861. In 1865 he began his movement by holding outdoor meetings and revivals in tents and theaters in London. The movement was originally known as the East London Revival Society, shortly renamed the Christian Mission, and finally in 1878 designated the Salvation Army. A military form of organization, with uniforms and other distinctive features, was adopted in the interest of a more effective “warfare against evil.”

From its inception the organization sought to minister to physical as well as spiritual human needs. Soup kitchens were the first in a long line of widely varied projects designed to provide physical assistance to the destitute. Although the members often met opposition, the value of Salvation Army services had been generally acknowledged by 1890, when General Booth set forth his plan of procedure in his book In Darkest England and the Way Out.

On his death William Booth was succeeded by his son, Bramwell, as head of the organization; but in 1929 his removal was voted by the high council of the Army, and Edward J. Higgins was elected to that post. Salvation Army work in the United States dates from 1880, when Commissioner George Railton and seven women workers from England founded a branch in Pennsylvania. In 1904, Evangeline Booth, daughter of the founder, was put in command of the work in the United States; in 1934 she became general of the International Salvation Army. 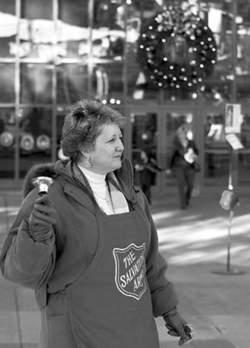 A volunteer rings the bell for the Salvation Army funds drive during the Christmas holiday season. The signature red collection bucket stands in the background. AP/Wide World Photos.

Within half an hour of the September 11, 2001, terrorist attack on the World Trade Center in New York, some 200 officers of the Salvation Army were on hand, offering coffee and hot meals, clothes, teddy bears to comfort children, and words of prayer and encouragement to anyone who needed them. The Salvation Army set up shop in more than twenty-four buildings, almost one million square feet of valuable Manhattan commercial space. Hundreds of trucks poured in and out of the city carrying sandwiches, hot dogs, food, water, and even eye drops. Every one of them bore the familiar logo of the Salvation Army, the same logo painted on the kettles that appear every Christmas in local shopping malls. No one will ever know for sure, but this effort may well go down as one of the greatest, most efficient, and most appreciated charity endeavors ever held on American soil. The current leader of this $2.1 billion organization is a man by the name of Todd Bassett. He makes $13,000 a year. (To put this in perspective, Marsha Evans, CEO of the American Red Cross, made $450,000 in 2002.) According to the latest U.S. figures, that's poverty level. And his worldwide staff doesn't do any better. Obviously they're not in it for the money. They are committed Christians. The Salvation Army is a Christian church. Attend a worship service held in the auditorium of the Salvation Army building in your town and you will come away thinking you've just attended an evangelical Protestant church service. And you have. They are in the business of saving souls. That's where the "Salvation" part of the name comes from. The "Army" part comes from the fact that they are organized along the same lines as the military. The person who runs a local Salvation Army is probably called "Captain" or "Lieutenant," not Reverend.

But what makes the Salvation Army unique is that William Booth, its Methodist founder, believed way back in 1865 that you couldn't talk to someone about Christ if his or her stomach was growling. He decided to minister to the teeming denizens of London's slums, offering them "soup, soap, and salvation."

Thirty-five years later the movement jumped across the Atlantic, setting up shop in New York City's Battery Park. After that, it was only a matter of time and effort.

When a hurricane devastated Galveston, Texas, in 1900, the Salvation Army was there. Since then its members have offered assistance at every national tragedy and most neighborhood fires, answering the call for major disasters and for knocks on their door in the dead of night.

You may think they only appear during the holidays. You may even resent their very visible presence as volunteers ring bells, asking for donations during the busy shopping days before Christmas. But their records and statistics are public knowledge. There's no gimmick and no hidden agenda. They do it because they believe in their ministry.

a. a Christian body founded in 1865 by William Booth and organized on quasi-military lines for evangelism and social work among the poor
b. (as modifier): the Salvation Army Hymn Book
http://www1.salvationarmy.org/
Collins Discovery Encyclopedia, 1st edition © HarperCollins Publishers 2005

Feedback
Flashcards & Bookmarks ?
Please log in or register to use Flashcards and Bookmarks. You can also log in with
Flashcards ?
My bookmarks ?
+ Add current page to bookmarks
Mentioned in ?
References in periodicals archive ?
We hope we can be a model for other Salvation Army units across the United States," Maj.
NextStep Solutions Selected by The Salvation Army Harbor Light Center from 15 Behavioral Health EMR Candidates
The book described a strategy that laid the foundation for The Salvation Army's work.
Onward Christian soldiers! sally army celebrates 125 years of saving souls in brum
We would also like to thank the City Council for their ongoing support for the various aspects of Salvation Army ministry across the city.
Thanks for your kind Christmas donations; Letters
Kathy Maxwell, area manager for the Salvation Army Trading Company, said: "When you consider that people spend hundreds of pounds on presents every year, it's a crying shame that so many Christmas gifts get buried and forgotten.
Use January to donate unwanted gifts to charity; BRIEFLY
Anthony Cummings, area manager, said November and December were busy months for Salvation Army shops, increasing the need for lots of extra helpers to support with sales and donations.
Festive volunteers needed by charity
ShoreTel (Nasdaq:SHOR), a provider of simple phone systems and unified communications (UC) solutions, announced on Friday that The Salvation Army (Australia Eastern Territory) will be rolling out a ShoreTel Unified Communications, Contact Centre and Mobility solution across its entire operation.
ShoreTel's solution selected by The Salvation Army in Australia
The project, won by ShoreTel partner HP, will see more than 1700 ShoreTel IP telephony handsets deployed to over 60 Salvation Army sites in New South Wales, Queensland and the Australian Capital Territory.
Salvation Army picks ShoreTel Australia
The Christian missionaries from the West followed, part of a large worldwide movement to bring the Christian gospel to the two-thirds of the world believed to be inhabited by "uncivilized heathen people." As part of that movement, the Salvation Army sent its missionaries to Africa.
Murdock, Norman H.: Christian Warfare in Rhodesia-Zimbabwe: The Salvation Army and African Liberation, 1891-1991
As the Salvation Army celebrates its 150th birthday this week the organisation that started by preaching Christianity has also made an enormous impact on Britain's poor.
Soup, soap and salvation; MARKING 150 YEARS OF THE SALLY ARMY
A former Salvation Army officer has been accused of a string of sex attacks on recruits.
THE CLAIMS Two recruits raped Two more attacked Two pregnancies; SALVATION ARMY ROCKED BY SEX ATTACK PROBE FORMER OFFICER IN THE DOCK AFTER ALLEGED VICTIMS BREAK THEIR SILENCE
The recent opening of the latest Ray and Joan Kroc Corps Community Center in Norfolk, Va., was the second to open this year, leaving The Salvation Army with two of the 27 centers left to unveil.
Kroc Center opening marks #25
In Massachusetts, the Salvation Army's Red Kettle fundraiser is lagging about $500,000 behind where it should be, the organization announced Wednesday.
The bell tolls; Salvation Army falling short of goals