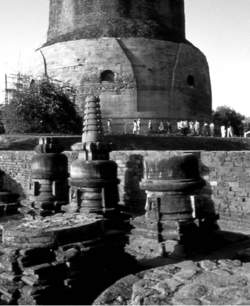 The ruins of Sarnath, India, remain a holy place for Buddhists, who consider this the site where Gautama Buddha first began to share his philosophy with others. Fortean Picture Library.

Located approximately 135 miles from Bodhgaya, where Gautama Buddha sat under the Bodhi Tree and found enlightenment, Sarnath is where he gave his first presentations concerning what would become Buddhism. It is now considered the birthplace of the Buddhist religion. In addition, Sarnath, also called Deer Park, was the site of the gathering of the first group of Buddhist monks and the formation of the initial Buddhist monastic community. Sarnath is just a few miles from the Hindu holy city of Benares, also known as Varanasi and Kashi.

Asoka, the third century BCE emperor who converted to Buddhism, helped expand the monastic life at Sarnath. The community, which grew to include more than a thousand monks, flourished through the ninth century, but declined after the establishment of Muslim rule in the area. Eventually, everything Buddhist would be destroyed. In the late-nineteenth century, the British launched archeological work in the area. They uncovered a number of the old Buddhist sites. Control of the Buddhist ruins has since been placed in the hands of the Maha Bodhi Society, which has expanded its initial concern with recovering Bodhgaya and returning it to Buddhist hands.

Primary ruins identified at Sarnath include the Dharmarajika Stupa built by Asoka to hold some relics of Gautama Buddha, though the location of the casket that contained the relics is unknown, if it even still exists. The carvings on the stupa‘s lower parts have survived and may be seen. Only the base of the Nulghandhakuti Shrine, an elaborate building used by the Buddha for meditation, remains. At the beginning of the 1930s, the Maha Bodhi Society erected a modern temple, the Mulagandhakuti Vihara. It is decorated with scenes of the Buddha’s life, but its main attraction is a silver casket found in Punjab in 1913. On it an inscription dated to 79 CE claims the casket holds some relics of the Buddha. Presented to the Society in 1935, it was subsequently taken to Sarnath.

Feedback
Flashcards & Bookmarks ?
Please log in or register to use Flashcards and Bookmarks. You can also log in with
Flashcards ?
My bookmarks ?
+ Add current page to bookmarks
Mentioned in ?
References in classic literature ?
Kim was guided to the Temple of the Tirthankars, about a mile outside the city, near Sarnath, by a chance-met Punjabi farmer - a Kamboh from Jullundur-way who had appealed in vain to every God of his homestead to cure his small son, and was trying Benares as a last resort.
View in context
Like watching the Ganges flow by the ghats in Varanasi or stopping by at the Dhamek stupa in Sarnath, about 10kms north east of Varanasi where Gautama Buddha first delivered his sermons in the Dharma after enlightenment.
On the campaign trail, a sweet reminder of good, old times
Since Buddha was born in Sarnath, the city has significant meaning for Buddhists around the world.
Devotees celebrate Buddha Purnima
It shall include mythologies and realities-- the epic Ramayana, river Ganga and Buddhist land of Sarnath.
Move to be introduced from current semester
Corridor * SARNATH BAN ERJEE * Penguin, 2004 * The "fragmented reality of urban life" captured through the interactions of Delhi shopkeeper Jebangir Rangoonwala with his customers
Fiction
Sarnath, where the Buddha gave his first sermon, is just 13 km from Varanasi.
A train runs where the Buddha walked
"The train that begins its journey from Safdarjung railway station in the capital now goes to Bodh Gaya, Rajgir, Nalanda, Varanasi, Sarnath, Gorakhpur, Kushinagar, Lumbini and Sravasti in a seven-night-eight-day odyssey," Harshvardhan Singh Rawat, a senior official at the Indian Railway Catering and Tourism Corporation (IRCTC), said.
A luxury special train ride to experience life of Buddha
The Sarnath Buddha Idol is an exquisite sculpture and a replica of the famous original 5th Century Gupta Period Idol from Sarnath, where Buddha preached his first sermon after attaining Enlightenment.
Idol of Lord Buddha unveiled at the entrance of International Buddhist Museum
The list includes Taktshang Monastery (Bhutan), Varanasi (India), Shwedagon Pagoda (Myanmar/Burma), Dambulla (Sri Lanka), Borobudur (Indonesia), Pashipatinath (Nepal), Pak Ou (Laos), Dharamsala (India), Wat Phra Kaew (Thailand), and Sarnath (India).
-Asia Transpacific Journeys Lists Top 10 Sacred Places in Southeast Asia
Day 2: Head to Sarnath, the Buddhist centre, 10 km away.
Eternal flame
It will conclude in Sarnath in the state of Uttar Pradesh, the location of the Buddha's first sermon.
Protesters March 1,000 Miles for Peace