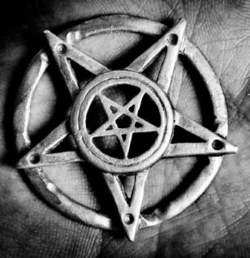 A pentagram symbol, often associated with Satanism, is also used as a Wiccan symbol.

Organized cults of devil-worship are on the rise. Each year, hundreds, perhaps thousands, of innocent men, women, and children are victims of human sacrificial rites in honor of Satan.

The scriptures of all religions acknowledge the existence of demonic beings. Some, such as Christianity, Zoroastrianism, and Islam, regard the power of evil entities as real and perceive them as rivals to the dominion of God. Others, such as Buddhism, consider them to be manifestations of ignorance and illusion. Those religious expressions that testify to demonic powers also recognize that these negative beings are subject to the commands of a leader, known by various names, such as Satan, Lucifer, Iblis, Mara, and Angra Mainyu.

Although Satanism and witchcraft have been synonymous in the popular mind for many centuries, they constitute two vastly divergent philosophies and metaphysical systems. Generally speaking, Witchcraft, the Old Religion, has its origins in primitive nature worship and has no devil or Satan in its cosmology. While some traditional witches seek to control the forces of nature and elemental forces in both the seen and unseen worlds, others are contented to work with herbs and healing. True Satanism—although manifesting in a multitude of forms and expressions and having also originated in an ancient worship of a pre–Judeo-Christian god—is today essentially a corruption of both the nature worship of witchcraft and formal Christian worship, especially the rites of the Roman Catholic Church.

Some scholars argue that in a very real sense, the Christian church itself “created” the kind of Satanism it fears most through the excesses of the Inquisition, which made an industry out of hunting, persecuting, torturing, and killing practitioners of the Old Religion who were condemned for worshipping the devil through the practice of witchcraft. Then, in the sixteenth century, a decadent aristocracy, weary of the severity of conventional mortality legislated by the church, perversely began to adapt witchcraft rituals to suit their own sexual fantasies. Unrestrained immorality was the order of the day as Parisians followed the hedonistic example of their Sun King, Louis XIV. The ancient rituals followed by serf and peasant were converted into an obscene rendering of the rites of traditional paganism combined the ritualistic aspects of Christian worship. Lords and ladies began to pray in earnest to Holy Satan to grant them high office and wealth.

Contemporary Satanism experienced its rebirth on Walpurgisnacht (May 1) 1966, when Anton Szandor LaVey brought into being San Francisco’s Church of Satan. Generally speaking, the kind of Satanism championed by LaVey preaches indulgence in personal pleasure, and it has never pretended to be other than a counterculture alternative to the civil and religious establishments and a relentless foe of conventional morality.

In contemporary times, those who openly claim to belong to organized satanic groups insist that they do not worship the image of the devil condemned by Christian and other religions. As they explain it, “Satan” does not specify a being, but rather a movement or a state of mind. What Satanists do worship, these individuals explain, is a Spirit Being known as Sathan in English and Sathanas in Latin. They do not believe Satan to be the supreme God, but they believe him to be the messenger of God in that he brought to Eve the knowledge of good and evil. Satanists believe that there is a God above and beyond the “god” that created the cosmos. The most high God takes no part in the affairs of the world, thus Satanists believe their faith to be the only true religion, insofar as revealed religion to mortals can be understood.

In the 1980s and ‘90s a widespread fear swept across the United States that there were dozens of secret satanic cults engaging in ritual abuse and sacrificing hundreds of babies, children, and adults. Television and radio talk shows featured individuals who claimed to be former members of such demonic cults and those who had allegedly recovered memories of satanic abuse. For a time, certain communities developed a near-hysteria and a fear of Satanists that recalled the days of the Salem Witchcraft Trials.

Rumors continue that each year hundreds of homicides are satanically or ritually inspired, but it has never been proved by federal, state, or local law enforcement that there exists an organized satanic movement responsible for these deaths. There have been serial killers who claimed to be Satanists, but in each of these cases police investigations revealed that the murderers were not actually members of any organized satanic religious group. Even such a high-profile “devil worshipper” as Richard Ramirez, the infamous “Night Stalker” of Los Angeles, who committed a series of brutal nighttime killings, robberies, and sexual attacks, was never found to be a member of any formal satanic group.

Contrary to the fears of conservative Christians, Satanism as an actual religion is composed of a few small groups, which according to census figures in the United States and Canada probably number fewer than ten thousand members. Such religious cults as Santer’a, Wicca, Voodoo, and various neopagan groups are regularly—and incorrectly—identified as satanic. It has been suggested that the statistics often quoted by Christian evangelists, warning of millions of Satan worshippers, quite likely consider all non-Christian religions as satanic, including Buddhism, Hinduism, and Islam.

However, there are many kinds of free-form Satanism, ranging from those merely symptomatic of sexual unrest and moral rebellion among young people to those of mentally unbalanced serial killers who murder and sacrifice their victims to their own perverse concept of satanic evil. There are also individuals, primarily teenagers and young adults, who for a time dabble in the occult, ceremonial magic, and other freelance rituals and who may declare themselves Satanists. Their numbers are difficult to assess with any accuracy, for they are essentially faddists, generally inspired by a current motion picture or television series that popularizes Satanism or witchcraft. Some of these satanic dabblers may go so far as to sacrifice a small animal and spray-paint satanic symbols on houses and sidewalks, but their commitment to a lifestyle dominated by dedication to Satan soon dissipates.

The following signs and symbols are among the most common expressions of Satanism, both among individual Satanists and those self-proclaimed “high priests and priestesses” who have established covens (traditionally having thirteen or fewer members):

The Pentagram: The traditional five-pointed star, most often shown within a circle.

The Upside-down Cross: A mockery of Jesus’s death on the cross. Sometimes the cross is shown with broken “arms.”

An Upside-down Cross Incorporating an Inverted Question Mark: The “Cross of Confusion,” questioning the authority and power of Jesus.

The Quarter Moon and Star: Represents the moon goddess Diana and Lucifer, the “Morning Star.” When the moon is reversed, it is usually satanic.

The Inverted Swastika: The swastika originally represented the perpetual progression of the four seasons, the four winds, the four elements, and so forth. Already perverted when the Nazis claimed it as their symbol, it is supposedly inverted by Satanists to show the elements of nature turned against themselves and out of harmony with God’s divine plan of balance.

Feedback
Flashcards & Bookmarks ?
Please log in or register to use Flashcards and Bookmarks. You can also log in with
Flashcards ?
My bookmarks ?
+ Add current page to bookmarks
Mentioned in ?
References in periodicals archive ?
Davis and Kent take on the hardest criminals Bay City has to offer, from snuff filmmakers, to underground death matches, to Satanic cults.
"Starsky and Hutch Next Gen" Book Brings Starsky and Hutch to New Generation of Fans
A Catholic priest who is able to cast out demons has warned against the circulation of rosaries and religious objects that have been 'prayed over' by Satanic cults.
Beware of 'Satan's rosary,' Church exorcist warns
The media gives us lurid stories of Satanic cults that kidnap and sacrifice blond, blue-eyed children.
"We are legion": primal dreams and screams in the Satanic screen
The Gordons' fears involve Charles Manson and Satanic cults. And it turns out the Satanists were at least partly right about the existence of The Beast.
'Annabelle' a too-rushed prequel to 'Conjuring'
"These are not done by satanic cults. These are very sophisticated - whether done by aliens, military or some clandestine monitoring, something unusual is going on."
Are aliens to blame for animal attacks?
They even compared cases to mutilations associated with big cat attacks and satanic cults.
Space invaders; SHEEP MUTILATIONS PROMPT WILD THEORIES
The company alleged that Amway Corporation distributors revived those rumours in 1995, using a voicemail system to tell thousands of customers that part of P&G's profits went to satanic cults.
CHEEKY DEVILS; Firm win pounds 10m over satanism rumours
These are the same people who worry most about fictitious waves of violent crime and secret satanic cults.
Why the terrorism scare is a moral panic
Father Aldo Buonaiuto, warned of a network of satanic cults, who as well taking part in black masses and vampirism, had created a black market for consecrated hosts which sold for up to 3500.
Strangeworld
As many as 5,000 people are thought to be members of Satanic cults in Italy, with 17 to 25-year-olds making up three quarters of them.
POPE'S SATAN FEAR
Several months ago, the regime tried to enact a similar crackdown on Internet usage, citing a need to protect its citizens from what it termed the harmful effects of illegal Web surfing, computer viruses and the websites of foreign-based Satanic cults.
Cuba again tries to limit internet access
Groups of this kind are frequently called satanic cults, and they are easily recognizable.
When spirituality goes awry: students in cults