city (1990 pop. 137,560), seat of Chatham co., SE Ga., a port of entry on the Savannah River near its mouth; inc. 1789. A rail, fishing, and industrial center, it is a leading southern port for the import and export of a wide variety of manufactured goods; the port's container terminal is in neighboring Garden City. Shipping is a major industry, but tourism is becoming increasingly important. Savannah is the seat of Savannah State Univ. and Armstrong Atlantic State Univ. (both part of the University System of Georgia) as well as the Savannah College of Art and Design. The Telfair Museum of Art is also there. Army and coast guard units occupy the Hunter Army Airfield. The well-planned city has wide, shaded streets and many parks; magnolias, pines, and ancient oaks are indigenous there. Several beach and island resorts as well as a wildlife refuge are nearby.

Savannah's historic district was designated a national historic landmark in 1966; many of its 18th- and 19th-century homes have been restored. Despite devastating fires in 1796 and 1820, many old buildings have survived, including the Pirates' House (1754), an old seaman's inn mentioned in Stevenson's Treasure Island; the Herb House (1734), the oldest existing building in Georgia; and the Pink House (1789), site of Georgia's first bank. The mansion birthplace of Juliette Gordon Low (built 1819–21) is owned and operated by the Girl Scouts of the U.S.A. as a memorial to their founder. The monument and grave of Nathanael GreeneGreene, Nathanael,
1742–86, American Revolutionary general, b. Potowomut (now Warwick), R.I. An iron founder, he became active in colonial politics and served (1770–72, 1775) in the Rhode Island assembly.
..... Click the link for more information.  are in Johnson Square. The many churches include the Lutheran Church of Ascension (dating from 1741); the Independent Presbyterian Church (1890s), a replica of an earlier church destroyed by fire and the scene of Woodrow Wilson's marriage to Ellen Axson; and the Cathedral of St. John the Baptist (1876), one of the largest Roman Catholic churches in the South.

Savannah is Georgia's oldest city; it was founded by James OglethorpeOglethorpe, James Edward
, 1696–1785, English general and philanthropist, founder of the American colony of Georgia. He had some military experience before being elected (1722) to the House of Commons, where he held a seat for 32 years.
..... Click the link for more information.  in 1733 and served as the colonial seat of government. During the American Revolution the British took Savannah on Dec. 29, 1778, and held it until July, 1782. A land-sea force of French and Americans tried to retake the city in 1779, first by siege and then by direct assault (on Oct. 9), but failed dismally. Savannah was the state capital from 1782 to 1785. With the growth of trade, and especially after the invention of the cotton gin and the construction of railroads extending to the cotton fields of central Georgia, the city became a rival of Charleston as a commercial center. The first steamship to cross the Atlantic, the Savannah, sailed from there to Liverpool in 1819. In the Civil War, Fort Pulaski, on an island near the mouth of the Savannah River, was captured by Federals in 1862, but the city did not fall until Dec. 21, 1864, when Sherman entered.

river, 314 mi (505 km) long, formed by the confluence of the Tugaloo and Seneca rivers and flowing SE to the Atlantic Ocean; with the Tugaloo it forms the entire S.C.–Ga. boundary. Savannah, Ga., the largest port on the river, is the head of navigation for oceangoing ships. Clark Hill Dam (completed 1954) and Hartwell Dam (1961) above Augusta, Ga., are part of the Savannah River basin development plan; the U.S. Department of Energy's Savannah River Site, which manufactures nuclear weapons, is also on the river.
The Columbia Electronic Encyclopedia™ Copyright © 2013, Columbia University Press. Licensed from Columbia University Press. All rights reserved. www.cc.columbia.edu/cu/cup/
The following article is from The Great Soviet Encyclopedia (1979). It might be outdated or ideologically biased.

a city in the southeastern United States, in the state of Georgia. Population, 105,000 (1974; with suburbs, 200,000). A port at the mouth of the Savannah River accessible to seagoing vessels, the city had a freight turnover of approximately 5 million tons in 1972. There is a paper combine, a shipyard, and sugar, chemical, and woodworking industries. The city also has a cotton market. Savannah was founded in 1733.

a river in the southeastern United States. The Savannah is 725 km long and drains an area of 27,200 sq km. It originates in the Appalachians from the confluence of the Tugaloo and Seneca rivers, crosses the Piedmont plateau and the Atlantic lowland, and empties into the Atlantic Ocean. Fed by subsurface water and rain, the Savannah experiences its maximum flow rate in spring and its minimum in summer. The mean flow rate is 336 cu m per sec. The river is navigable to Augusta, 356 km from the mouth. There is a hydroelectric power plant on the Savannah, and the port city of Savannah is situated near the river’s mouth. 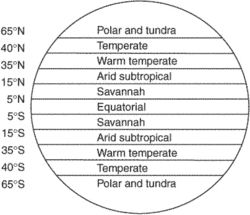 A zone in each hemisphere extending between the equatorial belt and the tropics. Temperatures remain fairly high in this region throughout the year. The region has two distinct dry and wet seasons.
An Illustrated Dictionary of Aviation Copyright © 2005 by The McGraw-Hill Companies, Inc. All rights reserved

1. a port in the US, in E Georgia, near the mouth of the Savannah River: port of departure of the Savannah for Liverpool (1819), the first steamship to cross the Atlantic. Pop.: 127 573 (2003 est.)
2. a river in the southeastern US, formed by the confluence of the Tugaloo and Seneca Rivers in NW South Carolina: flows southeast to the Atlantic. Length: 505 km (314 miles)
Collins Discovery Encyclopedia, 1st edition © HarperCollins Publishers 2005

Feedback
Flashcards & Bookmarks ?
Please log in or register to use Flashcards and Bookmarks. You can also log in with
Flashcards ?
My bookmarks ?
+ Add current page to bookmarks
Mentioned in ?
References in periodicals archive ?
Savannah North decline access development - advancement rates improved following the commencement of the Contractor
Panoramic Resources Limited - Savannah Operations Update and Project Loan Amendments
In 2017, Savannah agreed to buy an interest in two assets of Seven Energy.
Savannah Gets Nigerian Government Consent For Seven Energy Deal
READ: Panoramic Resources signs C$9 million deal to divest non-core asset and focus on Savannah Nickel Project
Panoramic Resources continues Savannah underground development as surface production rates improve
The purchase marks a significant benchmark for the bold industry leader: Savannah Commons will be the largest community operated by Thrive to date.
Thrive Senior Living Acquires Savannah Commons to Expand Footprint
This deal will provide Savannah with 100% control over Mina do Barroso, Savannah's flagship asset and Europe's most significant spodumene lithium deposit, with a JORC Compliant Mineral Resource Estimate currently standing at 27Mt.
Savannah Resources to Acquire the 25% Minority Interest in Mina do Barroso Project
Savannah will become the airline's 17th aircraft base, which will allow Allegiant to expand its service to and from the city, offer more new non-stop routes in the future, and further connect Savannah visitors, residents and businesses to destinations around the world.
Allegiant to establish aircraft base in Savannah, Georgia
Savannah is connected to the most extensive surface transportation network in the U.S.
Cronheim arranges loan for distribution acquisition
Representing Great Britain, Savannah won a silver medal at the 2010 AIBA World Championships.
The path to fame and glory for Hartlepool's very own 'Silent Assassin'
He and his wife, Autumn Phillips, have been blessed with two daughters, Savannah and Isla, 6.
Prince George, Savannah Are 'Close' Just Like Prince William, Peter Phillips
"When we adopted the name 'Bed and Breakfasts of Savannah' several years ago, our small properties could easily be described as Bed and Breakfast locations." said Cindy Roberts, Corporate Director of Sales for HLC Hotels.
Bed and Breakfasts of Savannah Changes Name to Historic Inns of Savannah
The creative use of Savannah's life-threatening asthma as a symbol of her dependence on others is not heavy handed and is utterly believable.
Herbsman, Cheryl Renee. Breathing