(time-base sweep), a method of representing the changes of a physical quantity variable over time by unambiguously converting it into another quantity that varies in space. Scanning is performed by a scanning element, which successively scans space according to specific laws so that certain spatial coordinates of the scanning element correspond to each instant of time and to a certain value of the physical quantity. The reverse transformations usually are also called scanning, obviously on the basis of the similarity of the techniques used in both cases.

Thus, in the picture tube (kinescope) of a television receiver, the electrical voltage at the control electrode, which is variable over time, is converted in a specific manner by means of scanning into a change in brightness over the surface of the screen. In a television camera tube, the reverse process is accomplished by scanning—the brightness of various sections of the image is converted into an electric current that varies accordingly. In both cases, the scanning element is the point on the surface of the screen at which the electron beam is focused. The movement itself of the scanning element is often called scanning.

The scanning element may be (1) a spot of light that moves over the image or screen on deflection of the light beam (optical scanning) or on displacement of the object of the image, (2) a small moving aperture in the screen that covers the image or the pen of an automatic recorder (mechanical scanning), or (3) a luminous point on the screen of a cathode-ray tube (electronic scanning). Since a single scanning system may use a combination of optical, mechanical, and other methods of producing and deflecting the scanning elements, scanning cannot always be classified exactly on the basis of these characteristics.

Television and facsimile chiefly use raster scans with a rectangular raster. Systems with tracking scanning are sometimes used in the transmission of contoured and line images in facsimile and in feeding graphic information to an electronic computer.

the controlled spatial displacement of a ray, such as a light ray, or beam, such as an electron beam, according to some definite pattern. Scanning is frequently used in various areas of science and technology. For instance, scanning by an electron beam is used to produce an image in cathode-ray tubes and in scanning electron microscopes. Scanning by a light ray is used in optical data-processing systems.

Scanning can be achieved by mechanical or nonmechanical methods. Mechanical methods are based on an angular displacement of the radiating system. In nonmechanical scanning the ray is displaced either by electrically controlling individual components of a stationary radiating device or by controlling the properties of the medium through which the ray is propagated. Alternating electric or magnetic fields that act upon a beam of charged particles are used to achieve scanning by such beams.

Figure 1. Beam motion in helical scanning. The displacement of the beam is rotational with a constant angular velocity. The relative motion is oscillatory in a plane perpendicular to the plane of rotation and at a significantly lower velocity.

in radar, the sequential inspection of a given spatial zone in some prescribed manner by displacing a radar beam or the solid angle of sight of a receiving antenna. The purpose of scanning is the detection and observation of objects located in the scanning zone. 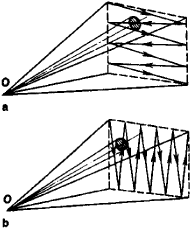 Figure 2. Beam motion in zigzag scanning. Both the displacement and the relative motion of the beam are oscillatory, with varying velocity ratios (a and b).

Scanning can be achieved either with a fan or pencil beam. In a fan beam the beam angle is much smaller in one plane than in the other; a pencil beam is a narrow beam symmetrical with respect to the direction of maximum intensity of radiation. The most common scanning methods with a fan beam are azimuth scan, in which the beam rotates around a stationary axis, and certain methods using sector scanning, in which the beam oscillates periodically through a given sector. Multibeam scanning systems with fan beams are also used. In scanning methods that use a pencil beam the complex motion of the beam can be represented as two simple motions: a displacement motion around a stationary axis and a relative motion around a moving axis. 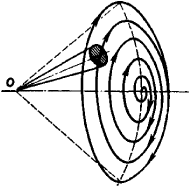 Figure 3. Beam motion in spiral scanning. The displacement of the beam is rotational, and the relative motion is oscillatory (here, with a lower velocity).

Figure 4. Beam motion in sequential lobing. The displacement of the beam is oscillatory, and the relative motion is rotational (here, at a significantly higher velocity). 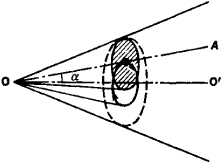 in radiology, the study of the distribution of radioactive preparations introduced into the body of a person or animal for purposes of diagnosis, treatment, or research. Scanning utilizes radioisotopes or their compounds, which, upon decaying, emit gamma quanta. A scanner is used to make the distribution of the radioactive preparations visible; it consists of a movable gamma-radiation detector (scintillation counters) and of systems for translating an electrical signal into a light signal. The resulting image is then recorded graphically or by means of black-and-white or color photography.

In clinical practice, scanning is used to obtain images of almost all internal organs and systems. It makes it possible to determine the position, shape, size, nature, and functional state of an organ’s internal structure and to detect the presence of sizable lesions. The method is safe, simple, and causes no discomfort.

In radar, the motion of the radar antenna assembly when searching for targets. Scanning usually follows a systematic pattern involving one or more of the following:
i. In horizontal scanning (or search lighting), the antenna is continuously rotated in an azimuth around the horizon or in a sector (sector scanning). This is used to find the azimuth of the targets and generate plan-position-indicator-scope displays.
ii. Vertical scanning is accomplished by holding the azimuth constant but varying the elevation angle of the antenna. It is used in height-finding radars to generate the relative-height-indicator-scope display.
iii. For conical scanning, a somewhat off-center radiating element is rotated while its parabolic reflectors remain fixed in position, so that the radiated beam generates a conically shaped volume with the antenna at the apex. It is used to determine an accurate bearing and the elevation angle of targets and is employed in automatic-tracking radars.
iv. In helical scanning (or spiral scanning), the azimuth and the elevation angle of the antenna are constantly varied, so that at a given distance from the radar the radiated beam generates the surface of a hemisphere. It is used for radio direction finding, in certain types of search radars, and in tracking radars to search areas for targets. See sector scan, conical scanning, helical scan, and height-finder radar.
An Illustrated Dictionary of Aviation Copyright © 2005 by The McGraw-Hill Companies, Inc. All rights reserved

Feedback
Flashcards & Bookmarks ?
Please log in or register to use Flashcards and Bookmarks. You can also log in with
Flashcards ?
My bookmarks ?
+ Add current page to bookmarks
Mentioned in ?
References in periodicals archive ?
Do your research If you have been told by a consultant or doctor that you need a MRI scan, but this situation leaves you worried and concerned, then take a look at European Scanning Centre.
Did you know there's a way to have a MRI scan if you are claustrophobic? ADVERTISEMENT FEATURE European Scanning Centre in Cardiff successfully scans patients who are unable to use a conventional closed MRI, due to its Open and Upright MRI Scanner
As the world's most secure scanning device, the HP Scanjet boasts of the HP FutureSmart firmware, a powerful operating system that enables the network scanner to have the latest security enhancements, mobile device connectivity, or workflow features through periodic upgrading.
Get utmost office productivity and document security with HP Scanjet network scanner
At issue in the case was Google's practice of scanning emails received by Gmail users that were sent by users of other email services.
Google Will Stop Reading Your Emails To Collect Ad Information
The GM position statement states that pre-and post-repair scanning of all collision damage repair vehicles must be performed.
Seeing what is invisible
As the one-stop for laser scanning solutions, Nutfield Technology has a full product line ideally suited for all laser scanning applications.
The HS-15 flexure-based galvanometer is your solution for laser applications
SV600 is equipped with book image correction and page turning detection function 5 to assist in scanning books.
Fujitsu Launches ScanSnap SV600: Digitize Entire Books and Newspapers with Ease
In order to evaluate the accuracy of scanning results, the experimental photogrammetric processing of aerial photographs has been conducted.
Scanning aerial photos using a non-professional scanner
3D scanning in conjunction with simulation can help companies to properly evaluate the effects of variations between theoretical designs and real manufactured parts.
A true picture of a product: 3D laser scanning technology captures comprehensive dimensional data for R&D, simulations, product testing, and quality control
"It takes a shot of the shape, then it calculates the shape and uses those calculations to film the scanning," Ishikawa said, explaining the system used to reconstruct the original page.
Speedy scanner re-writes book on publishing technology
They added they believe that the deployment of hybrid scanning systems that include both traditional laser barcode scanning and RFID scanning technologies will be especially valuable in baggage transfer operations, where it is common to see severely damaged barcodes in the baggage flow.
... and introduces hybrid identification solution
Three-dimensional scanning is used for diverse applications in the design, manufacture, and inspection of intricate components and parts.
Inspecting complexity: an overview of cross-sectional scanning
Scanning in Full Access mode allows the controller to be initialized for many predefined clocking sequences that launch and capture data within the data pipelines.
Testing challenges of a multicore microprocessor