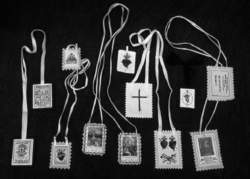 Worn by nuns or monks, scapulars can indicate the religious order to which one belongs. Each scapular has its own history, often associated with visions of Jesus, Mary, or angels. Fortean Picture Library.

The scapular emerged as part of the dress of monks in the early Middle Ages. Simply a narrow cloth with an opening for the head that hangs down a person’s front and back, the monk’s scapular evolved from the aprons worn by agricultural laborers over their clothes. Over the centuries, the scapular began to be thought of as the identifying mark of monastic garb. As such, they were adopted for wear by laypeople who wished to show their support for a particular order.

As a lay garment, the scapular lost its functional role and evolved into a purely devotional item. It was cut down in size from a large piece of cloth to just two small squares of cloth connected by two strips of ribbon. These small stylized devotional scapulars tended to be worn under the clothing, as a matter of personal practice.

The wearing of the small scapulars was greatly influenced by knowledge of their association with the apparitions of Mary and Jesus. For example, the oldest of the devotional scapulars, the white scapular, dates to the twelfth century. In 1198 Pope Innocent III, who sanctioned the new Order of the Trinitarians, had an angelic visitation. The angel wore a flowing white garment on the breast of which was the symbol of a cross with a blue horizontal bar and red vertical shaft. This cross became the symbol of the Trinitarians. The white scapular was then passed on to the laypeople who identified with the order.

Then, in 1251, the Blessed Virgin appeared to Simon Stock, who was the Superior General of the Carmelite Order. As part of the encounter, she gave him the brown scapular, promising that wearing it would preserve individuals from eternal damnation and that on the first Saturday after their death they would be taken to heaven. The scapular took on added significance as a sign of the dedication of the Carmelites to Mary and their desire to be committed to Christ.

The blue scapular originated with Saint Beatrice da Silva Meneses (1426–1492), the founder of the Order of Franciscan Sisters of the Immaculate Conception of the Most Blessed Virgin Mary (Conceptionists). It was included as part of the order’s standard garb, and through them passed on to lay supporters. Not initially related to a particular supernatural event, the blue scapular would later receive a blessing in the seventeenth century. In 1617, toward the end of her life, Ursula Benincasa (1547–1618), founder of the Congregation of the Oblates of the Immaculate Conception of the Blessed Virgin Mary, had a vision of the Blessed Virgin dressed in white with an azure outer garment. As part of the lengthy vision, Mary showed sister Ursula a multitude of angels distributing the blue scapulars around the globe. After Ursula’s death, the women of the order made the promotion of the scapular a special mission of their order.

With the expansion of the means of personal devotion in the last two centuries, additional scapulars appeared. In 1840 Sister Justine Bisqueyburu of the Daughters of Charity had one of her many encounters with Mary. On this occasion she carried a green scapular and told Sister Justine,”This holy badge of my Immaculate Heart is to be the means of conversion of souls.” Over the next years subsequent visitations by Mary added to the meanings and usage of the green scapular.

In 1846 Sister Appoline Andriveau, of the Sisters of Charity of Saint Vincent de Paul, experienced an apparition of Jesus Christ, who showed her a red scapular. He promised an increase of faith, hope, and charity to any who would wear it on Fridays. This apparition occurred several times and was finally reported to the church authorities. In 1847 Pope Pius IX assigned the Lazarist Fathers the duty of blessing the scapulars and passing them on to the faithful. The red scapular has pictures of Jesus on the cross and the Sacred Hearts of Jesus and Mary.

The scapulars further illustrate the supernatural origins of most forms of popular devotion in the Catholic Church (including, for example, the rosary, the Miraculous Medal, the Sacred Hearts of Jesus and Mary, etc.), almost all of which were initiated by an apparition of Mary or Jesus. This tradition has continued to the present day. Most recently, a laywoman named Judith Elaine Melendez of Redford, Michigan, experienced a number of apparitions, as reported in a 1995 story of the encounters. While she was writing a poem, Mary appeared to Melendez as Our Lady of the Sun, a particular form of the Blessed Virgin indicating her disapproval of abortions.

Melendez described this appearance of Mary, noting several details: “In Her left hand is a yellowscapular. This scapular should be worn by women who are pregnant and all teenage girls. This scapular is a symbol of stopping abortion. On one side of the yellow scapular is a small rose bud with a drop of blood. This represents Our Lord Jesus as a child when He was circumcised and shed His first blood for all of mankind. On the other side of the yellow scapular is the Risen Christ on His Cross, represented by a full-blown rose. On each side of Our Lady’s Mantle are three roses. On the left side of Her mantle, the three roses stand for the Holy Family: Jesus, Mary and Joseph. On the right side of Our Lady’s Mantle, the three roses stand for The Holy Trinity: Father, Son and Holy Spirit.”

Feedback
Flashcards & Bookmarks ?
Please log in or register to use Flashcards and Bookmarks. You can also log in with
Flashcards ?
My bookmarks ?
+ Add current page to bookmarks
Mentioned in ?
References in periodicals archive ?
The flowing apron was not practical for most people, so the scapular shrank to two small patches of cloth connected by strings that would hold one patch on the back and one on the heart.
Why do Catholics wear their faith around their necks?
Classic gift items are the Standard Sized Scapulars, featuring medals that measure approximately 2 cm by 1.4 cm (available in silver or a combination of both 18k yellow gold and silver).
Apart from scapulars, medals featuring religious icons also make lovely gifts for the holiday season and all year round.
Gifts of faith
In the last two years have you: Latinos Others Gone for private confession 42% 37% Made the Stations of the Cross 44% 29% Said the rosary 64% 46% Read the Bible at home 58% 53% Had your house or car blessed 33% 9% Worn medals, crucifixes, scapulars, or rosaries 70% 51% Kept images of saints in your home 83% 61% Kept an altar in your home 18% 3%
FROM THE BOOK OF NUMBERS
July 16 is the liturgical feast or "scapular feast" of Our Lady of Mount Carmel to commemorate the giving of the brown scapular by the Blessed Virgin Mary to the monastic St.
Catholic faith: Devotion to our Lady of Mount Carmel