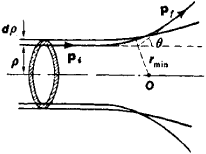 One of the basic quantitative characteristics of both elastic scattering and inelastic processes is the effective cross section of the process, usually called simply the cross section, which is the quantity proportional to the probability of the process and having the dimension of area (cm2). The measurement of the cross sections of processes makes it possible to study the laws of interaction of particles and to investigate particle structure. For example, the classical experiments of E. Rutherford on the scattering of α-particles by atoms established the existence of atomic nuclei; information on the structure of nucleons is obtained from experiments on the scattering of high-energy electrons by protons and neutrons (nucleons); and experiments on the elastic scattering of neutrons and protons by protons make it possible to investigate nuclear forces in detail.

where U(r) is the potential energy of interaction, r is the distance to the center of force (rmin is the minimum distance), and

is the energy of the particle.

The general principles of invariance—invariance with respect to rotations (from which the conservation of angular momentum derives), invariance with respect to reflections (from which the conservation of parity derives), and time reversal —significantly limit the possible type of matrix elements of the S-matrix and make it possible to obtain experimentally verifiable relationships. For example, it follows from the law of conservation of parity that the polarization of a finite particle upon collision of nonpolarized particles is directed along the normal to the scattering plane—the plane passing through the initial and final momenta of the particle. By measuring the direction of the polarization vector, it is possible to determine whether parity is conserved in the interaction responsible for the process. The isotopic invariance of strong interactions leads to relationships between the cross sections of different processes and to the prohibition of certain processes. In particular, it follows from isotopic invariance that on collision of two deuterons, an α-particle and a π0-meson cannot be produced. The investigation of this process experimentally has confirmed the validity of isotopic invariance.

The condition of unitariness of the S-matrix, which follows from the conservation of total probability (the total probability of scattering for all possible modes of disintegration must equal 1), also imposes restrictions on the matrix elements of processes. One of the important relationships that follow from this condition is the optical theorem, which relates the elastic scattering amplitude for an angle of 0° to the total cross section, which is the sum of the elastic scattering cross sections and the cross sections of all possible inelastic processes.

It follows from the general principles of quantum theory, such as the microcausality condition and relativistic invariance, that the matrix elements of the S-matrix are analytic functions in some domains of the complex variables. The analytic properties of the matrix elements of the S-matrix make it possible to obtain a number of relationships between experimentally determined quantities—dispersion relations, the Pomeranchuk theorem, and others.

In the case of elastic scattering of spinless particles, the asymptotic behavior of the wave function Ψ (r), which is a solution of the Schrödinger equation, has the form

Here, r is the distance between particles, k = p/ħ is the wave vector, ρ is the momentum in the center-of-mass system of the colliding particles, ħ is Planck’s constant, θ is the scattering angle, and f(θ) is the scattering amplitude, which depends on the scattering angle and the energy of the colliding particles. The first term in this expression describes free particles with the momentum ρ = ħ k (the incident wave), and the second term describes particles moving from the center (the scattered wave). The differential scattering cross section is defined as the ratio of the number of particles scattered per unit time into the element of the solid angle dΩ to the flux density of the incident particles. The scattering cross section for the angle θ (in the center-of-mass system) over a unit solid angle is equal to

For the scattering amplitude, the following expansion for partial waves (waves with a defined orbital angular momentum l) obtains:

The total elastic scattering cross section is equal to

is the partial elastic scattering cross section for particles with orbital angular momentum l and ƛ = 1/k is the de Broglie wavelength of the particle. When Sl = –1,

reaches a maximum and is equal to

Here, δl = π/2 (resonance in scattering). Thus, at resonance the cross section of a process is determined by the de Broglie wavelength ƛ; for slow particles (for which ƛ ≫ R0), where R0 is the effective range of forces, the cross section greatly exceeds the quantity

(the classical scattering cross section). This fact—incomprehensible from the standpoint of the classical theory of scattering—is a consequence of the wave nature of microparticles.

The behavior of the scattering cross section near resonance is determined by the Breit-Wigner formula:

The unitary principle restricts the value of the partial cross section for inelastic processes:

For short-range interaction potentials, scattering phases with l ≲ bk, where b is the range of forces, play a primary role. This condition may be rewritten as l/k≲ b; the quantity l/k— the impact parameter in quantum theory—determines the minimum distance to which a free particle with an angular momentum l can approach the center of forces. When bk ≪ 1 (low energies), only the S-wave (the partial wave with l = 0) must be taken into account. In this case, the scattering amplitude is equal to

and the scattering cross section is independent of the angle (the scattering is spherically symmetrical). At low energies the following expansion holds:

One of the basic approximate methods of scattering theory is perturbation theory (a solution method based on expansion with respect to a small parameter). If an incident plane wave that describes the initial particles is weakly disturbed by the interaction potential, then Born’s approximation (the first term in the perturbation theory series) is applicable. The elastic scattering amplitude in Born’s approximation is equal to

The methods of quantum field theory are used to describe scattering processes at high energies. For example, in the lowest order of the perturbation theory, the elastic scattering of electrons (e) by protons (p) is due to the exchange of a photon between the electron and the proton (see the Feynman diagram in Figure 2). The applicability of perturbation theory in this case is based on the smallness of the fine-structure constant α ≈ 1/137 that characterizes the force of the electromagnetic interaction. The electric charge and magnetic form factors of the proton —quantities that characterize the distribution of the electric charge and magnetic moment of the proton (the proton’s electromagnetic structure)—enter the expression for the cross section of this process. Information on these very important characteristics of the proton consequently can be obtained directly from experimentally measured values of the cross section of elastic scattering of electrons by protons. At sufficiently high energies, inelastic processes of particle production become possible in addition to elastic ep scattering. If only electrons are recorded in an experiment, the sum of the cross sections of all possible processes is thus measured.