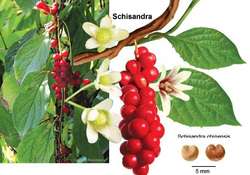 Originally from China, but can be grown anywhere. The “Five flavor berry” is known as a beauty enhancing herb that detoxifies and regenerates the liver and lungs, helps reproductive system, builds sexual fluids, moistens the skin, calms nervous system, helps eye conditions like astigmatism, macular degeneration, diabetic retinopathy, eye fatigue, night blindness, improve peripheral vision, eye adaptation to the dark, strengthens adrenal glands. Liver healing qualities equivalent to milk thistle. Successfully used in China to treat hepatitis. Cough suppressant, regulates intestinal flora, helps restore proper water metabolism to the cells. Contains over 20 lignans that bind to carcinogenic substances and safely removes them from the body. Strong anti-oxidant. It’s a food as much as a medicine. Many claim it’s better than Gingko for an immediate memory boost. To help clean liver, it’s recommended to take a half a teaspoon of schizandra powder in your mouth and let it dissolve slowly over the next few minutes. It stimulates your liver to clean by raising levels of antioxidant glutathione in the liver to assist with detoxification and increases enzymatic metabolism of liver toxins, as well as increase production of digestive enzymes. Contains vitamins A, B1, B2, B3, C, calcium, cobalt, chromium, iron, manganese, magnesium, phosphorus, potassium, selenium, silicon, zinc, and saponins. The berries are the most popular used part, usually dried and made into powder or tea, but leaves and root can also be used. Do not use if pregnant.
Edible Plant Guide © 2012 Markus Rothkranz
The following article is from The Great Soviet Encyclopedia (1979). It might be outdated or ideologically biased.

a genus of plants of the family Schizandreae. It comprises 14 species. The species Schizandra chinensis, a woody monoecious liana, grows in the USSR. It is up to 15 m long and 2 cm thick. The leaves are alternate, simple, elliptic or obovate, acuminate at both ends, remotely denticulate, and somewhat fleshy. The flowers are unisexual, white or sometimes pinkish, and fragrant; they are approximately 2 cm in diameter and grow in groups of three to five in axillary clusters. The fruits are red or orange round berries, which are gathered in a tight bunch. When rubbed, the berries and other parts of the plant leave the taste and smell of lemons.

Schizandra contain the crystalline substance schizandrin, essential oils, organic acids, carbohydrates, vitamin C, and other substances. The plants are used medicinally to stimulate the central nervous system, the cardiovascular system, and breathing. The medicinal substances are taken internally in the form of a tincture of alcohol, a powder, or a tablet to treat physical strain, mental fatigue, unusual drowsiness, and other conditions.

Schizandra are found in the mountain forests of East Asia. In the USSR they grow in Amur Oblast, in Khabarovsk and Pri-mor’e krais, on Sakhalin Island, and on the Kuril Islands. The plants grow on well-drained soils and are winter-hardy. The young plants can tolerate shade, although they develop better in the light. Schizandra are propagated by seeds and root-cuttings.

Schizandra chinensis is cultivated in the USSR, where it grows best in the Baltic republics, Byelorussia, the northern and western Ukraine, the central belt of the European part of the RSFSR, and Western Siberia. When using the principal method of propagation—by seed—sowing is done in nurseries either before winter or in spring. Seedlings are grown in the nursery for two or three years and then planted in the open, where they require support. The planting area should have fertile upper soil. The seedlings grow best in soil that has lain fallow or from which vegetables and row crops have been harvested. Before plowing, organic fertilizers and manure or compost should be applied. For support, a trellis made of posts 3–3.5 m high and wire can be used. A row of seedlings is planted on each side of the trellis. The distance between rows is 1 m, with the plants spaced 50–70 cm from each other. There should be 2–2.5 m between each trellis. The fruits of S. chinensis are gathered at full ripeness, in September or October. Because of its azure crown, the plants are used as ornamentals.