Any technique for the photographic recording of schlieren, which are regions or stria in a medium that is surrounded by a medium of different refractive index. Refractive index gradients in transparent media cause light rays to bend (refract) in the direction of increasing refractive index. This is a result of the reduced light velocity in a higher-refractive-index material. This phenomenon is exploited in viewing the schlieren, with schlieren photographs as the result. Electronic video recorders, scanning diode array cameras, and holography are widely used as supplements. See Holography, Refraction of waves

There are many techniques for optically enhancing the appearance of the schlieren in an image of the field of interest. In the oldest of these, called the knife-edge method (see illustration), a point or slit source of light is collimated by a mirror and passed through a field of interest, after which a second mirror focuses the light, reimaging the point or slit where it is intercepted by an adjustable knife edge (commonly a razor blade). The illustration shows the “z” configuration which minimizes the coma aberration in the focus. Mirrors are most often used because of the absence of chromatic aberration. See Aberration (optics) 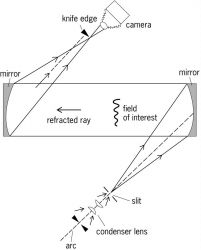 Rays of light that are bent by the schlieren in the direction of the knife edge are intercepted and removed from the final image of the region of interest, causing those regions to appear dark. Consequently, the system is most sensitive to the density gradients that are perpendicular to the knife edge. The knife edge is commonly mounted on a rotatable mount so that it can be adjusted during a measurement to optimally observe different gradients in the same field of interest. The intensity in the processed image is proportional to the refractive index gradient. A gradient in the same direction as the knife edge appears dark. Gradients in the opposite direction appear bright. This method, employed with arc light sources, is still one of the simplest ways to view refractive index changes in transparent solids, liquids, and gases. A well-designed schlieren system can easily detect the presence of a refractive index gradient that causes 1 arc-second deviation of a light ray.

Except for locating and identifying schlieren-causing events such as turbulent eddies, shock waves, and density gradients, schlieren systems are usually considered to be qualitative instruments. Quantitative techniques for determining density are possible but are much more difficult to employ. The most common of these is color schlieren. The knife edge is replaced with a multicolored filter. Rays of light refracted through different angles appear in different colors in the final image.

The availability of lasers and new optical components has expanded the method considerably. When a coherent light source such as a laser is used, the knife edge can be replaced by a variety of phase-, amplitude-, or polarization-modulating filters to produce useful transformations in the image intensity. See Interferometry, Laser, Polarized light

Feedback
Flashcards & Bookmarks ?
Please log in or register to use Flashcards and Bookmarks. You can also log in with
Flashcards ?
My bookmarks ?
+ Add current page to bookmarks
Mentioned in ?
References in periodicals archive ?
The Ground-to-Air Schlieren Photography System, developed by MetroLaser, Inc., under a Small Business Innovation Research contract, employed telescopes, digital cameras and specialized image-processing software to record imagery of airflow density, in this case the density of the shockwaves, as F-15 and F/A-18 aircraft passed between the cameras and the sun.
GASPS schlieren imaging of Supersonic shockwaves
Schlieren photography technique was used to visualize the flame front, at which change in the gas density is the maximum.
Assessment of burning velocity test methods for mildly flammable refrigerants, Part 1: closed-vessel method
They used what is known as schlieren photography to catch the shock wave.
Japanese scientists capture trombone's shock waves on film
Gary Settles, an engineering professor at Penn State University, uses a technique called schlieren photography, which "takes an invisible phenomenon and turns it into a visible picture," he says.
Fire-breathing at a carnival sideshow?
Pic is a landmark in two respects: It's the first Imax project to employ high-definition cameras, which results in the crispest image of any large-format film to date; it also adapts such medical photographic methods as endoscopy, Schlieren photography and magnetic resonance imagery, using lenses by German optical firm Karl Storz and formats from 16mm to 65mm, to plumb organs, cavities and even the heart chamber.
THE HUMAN BODY