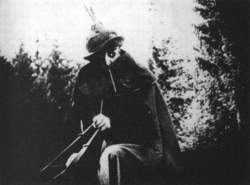 Max Schreck in his most famous role as the terrifying vampire Graf Orlock in Nosferatu.

Max Schreck was a German character actor chosen to play Count Orlock, the Dracula figure in F. W. Murnau’s classic silent film Nosferatu: Eine Symphonie des Grauens (1922). His last name, Schreck, which means “terror” in German, was his actual name and not a stage pseudonym. He became an actor for Max Reinhardt, a prominent theatrical producer in pre-World War I Germany, where he most likely had come to the attention of director and screenwriter Henrik Galeen. While he played many parts, none are as memorable as his single performance in Nosferatu.

In the film, Schreck portrayed Dracula as a repulsive rodent-like creature. Dracula’s fangs became two teeth in the center of his mouth. All of his facial features from his nose to his ears were exaggerated. His head was bald. His hypnotic eyes were surrounded by dark makeup. His fingers were not simply long, but elongated. He walked in a stiff halting manner. The grotesque characterization was also further distorted by the use of Schreck’s shadow which (in spite of the fact that vampires as nocturnal soulless creatures are not supposed to have shadows) emphasized the horrific features. However, he did have a reflection in the mirror.

The idea of Dracula as rodent was carried through by associating Count Orlock with rats and an outbreak of the plague that had occurred in Bremen, Germany, in the 1830s. As an interpretation, it was most effective, but essentially a dead end as far as the vampire character was concerned, relating it to traditional inhuman monsters rather than the suave and very human seducer and sexual predator that would come to the fore in the British stage and American film versions.

Schreck’s interpretation of Dracula would be revived in the 1970s by Klaus Kinski for the remake Nosferatu: The Vampyre (1979) and its Italian sequel, Vampire in Venice (1988). Writer Stephen King also adopted a Schreck-like vampire for his villain in Salem’s Lot, and it inspired the character of Radu, the evil vampire in the Subspecies video series.

Schreck would go on and play a variety of parts in close to thirty films during the remaining fourteen years of his life, but none as noteworthy as his single performance in the one film which was suppressed during his lifetime and would bring him fame only a generation after his death. In 2008, German author Stefan Eickhoff wrote the first biography of Schreck, Max Schreck—Gespenstertheater, published in Munich.