During the mid-1900s a man by the name of L. Ron Hubbard (1911-1986) began to study a field of metaphysics he called Dianetics, a word he coined to describe "what the soul is doing to the body." The book he wrote about his studies explained that humans have lost touch with their environment. People, he said, don't have spirits. They are spirits (literally thetans, from the Greek letter theta, which is often used as a symbol for spirit). What they have is a mind and a body. But they have forgotten this. They have forgotten who they really are. They live false lives, concentrating on all the wrong things. As a result, they suffer stress-related, psychosomatic illnesses and have lost the ability to be happy.

Drawing from what he estimated were some 50,000 years of religious wisdom, Hubbard believed he was the first to apply scientific methods and discoveries to the great questions of life: Who am I? Where did I come from? Where am I going?

In this sense, the Church of Scientology ("scientology" literally means "knowing how to know") is, according to its founder, the first religion that combines scientific principle with religious belief. It's a universal church for the new age, drawing from the fields of both science and religion.

His ideas were convincing enough to draw the attention of some very well known people. Actors John Travolta and Tom Cruise are among the most frequently mentioned high-profile members of the church.

Hubbard taught that humans were basically good, not evil. Experience and wrong thinking have taught them to commit evil deeds. Disagreeing with the Christian position first expressed by the apostle Paul (see Paul, Saul of Tarsus), Hubbard asserted that evil is not a part of basic human nature. It is something people do, rather than something they are.

What this means is that humans can improve by advancing spiritually. It takes work, training, and, according to critics, a lot of money, but it is something people can accomplish if they apply themselves.

As soon as Scientology began its phenomenal growth, attracting famous people and a big bank account, cries of "cult" began to be heard throughout the land.

Scientology has a lot in common with what people consider cults to be. It had a charismatic, high-profile leader. Stories about mind control and secret initiation rites began to circulate. People were said to be afraid to go against the wishes of the governing hierarchy. The high-profile adherents were called fronts or marketing tools.

Scientology has a lot of followers, and it is growing by leaps and bounds. It also has a lot of detractors, who say it will cost the average convert some $400,000 over the course of an average lifetime.

The Religion Book: Places, Prophets, Saints, and Seers © 2004 Visible Ink Press®. All rights reserved.
The following article is from Conspiracies and Secret Societies. It is a summary of a conspiracy theory, not a statement of fact. 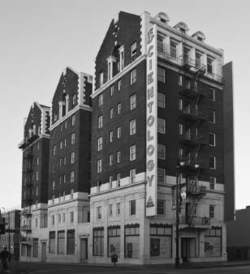 Although a celebrity cult of the rich and famous, Scientology intimidates and controls its rank-and-file members.

Few of the controversial new religious movements have received as much negative publicity or been investigated by so many government agencies, including the Internal Revenue Service, the Food and Drug Administration, and the Federal Bureau of Investigation, as has Scientology.

The founder, Lafayette Ronald Hubbard (1911–1986), known to Scientologists the world over as “L. Ron,” is said to have studied many Eastern philosophies as he journeyed around the globe. A background in mathematics, engineering, and nuclear physics grounded him in the physical sciences at the same time that he was exploring the human mind through an examination of Freudian psychoanalytic theory. When injuries suffered in service as a naval officer during World War II left him crippled and blind, Hubbard claimed that his ability to draw upon mental insights allowed him to cure himself of his disabilities. He called this process Dianetics, and he first outlined its central elements in article for the May 1950 issue of Astounding Science Fiction magazine. Later that same year, Hubbard published Dianetics: The Modern Science of Mental Health.

Dianetics states that there are essentially two components of the mind, the analytical and the reactive. The analytical aspect, similar to the Freudian concept of the ego, is the consciously active and aware part of the mind. The reactive mind comes into play during times of intense stress when, very often, the analytical facet shuts down. Although the individual may not be aware of the process, the reactive mind absorbs and records every nuance of emotional, mental, and physical pain suffered by him or her. Hubbard called the impressions or “recordings” made by the reactive mind during moments of trauma “engrams,” and while the conscious, analytical mind may remain unaware of their presence, they can cause debilitating mental and physical problems and inhibit a person’s full potential.

The Dianetics process called “auditing” enables a troubled or inhibited individual to explore those engrams preventing his or her development and to be “cleared” of such impediments by an “auditor,” a minister of Scientology. Once a Scientologist has been “cleared,” he or she may continue progress to a state wherein freedom from all the constraints of matter, energy, space, and time is attained and a transcendent level of near-perfection is achieved.

In spite of warm endorsements regarding the benefits of Scientology from celebrities such as John Travolta, Kelly Preston, Tom Cruise, Isaac Hayes, Priscilla Presley, and Kirstie Alley, the organization is very often in the center of controversies involving accusations that it poses as a religion while it mentally and physically abuses its adherents. Richard Behar, writing in the May 6, 1991, issue of Time magazine, stated that rather than being a religion or a church, Scientology “is a hugely profitable global racket that survives by intimidating members and critics in a Mafia-like manner.”

Feedback
Flashcards & Bookmarks ?
Please log in or register to use Flashcards and Bookmarks. You can also log in with
Flashcards ?
My bookmarks ?
+ Add current page to bookmarks
Mentioned in ?
References in periodicals archive ?
The influence Cruise has within Scientology can also be seen with his adopted children.
Tom Cruise A 'God' Within Scientology, Says Leah Remini
The website scientology.tv says the Scientology Network will debut at 8 p.m.
Scientology church to launch TV Network
Ron Hubbard, the founder of Scientology. Hubbard was first a writer of pulp fiction and then a writer of science fiction.
Going Clear: Scientology and the Prison of Belief
Over the course of the next three decades-plus, there were a handful though only a handful of tough-minded articles like Behar's."Everybody who wrote about Scientology knew they were taking a risk," Wright told me.
Scientology's Chilling Effect
"But they're probably insecure, so the selfhelp of Scientology lends itself to that.
Scientologists wanted Bono; RELIGION 'SAW HIM AS PRIME RECRUIT'
Contrast this response to the attitude toward Scientology in the United States, where the Church, though largely seen as a celebrity curiosity, is a tax-exempt, legally recognized religious faith.
Scientology Is Not a Religion
Murdoch acknowledged his tweets would be controversial about an hour afterward with: "Since Scientology tweet hundreds of attacks.
Tom Cruise religion branded 'creepy'
A Church of Scientology spokesman said: "Scientology is very popular with those who have visited our churches, met with Scientologists and observed or utilised our numerous community activities that effectively address drug abuse, illiteracy, declining moral values, human rights violations, criminality and more.
SCIENTOLOGY LOSES TAX BREAKS
The Los Angeles-based Church of Scientology, founded in 1954 by the late science fiction writer L.
Church of Scientology convicted of fraud in France
The Church of Scientology has Tom Cruise and John Travolta among its followers.
Demo against Church move; CAMPAIGN: Fears over Scientology recruitment in city
Scientology is based on the teachings of sci-fi writer L Ron Hubbard and many critics have dismissed it as a cult.
Katie's lessons on Tom
These actions come in the wake of an article by Nanette Asimov, published in the San Francisco Chronicle on June 9, 2004, examining associations between Narconon and Scientology and quoting specialists in the addictions field to the effect that some of Narconon's teachings are pseudoscientific.
Is scientology in your schools?