apparatus for observation and recording of the tracks of ionizing particles. It is based on the luminescent properties of phosphors (scintillators), which fluoresce when fast charged particles pass through them. A charged particle loses energy in matter as it ionizes and excites atoms and molecules in the immediate vicinity of its path. In scintillators the part of the energy lost by a particle is converted into the energy of a light flash, which can be recorded by means of photomultipliers (in some cases it may be seen by the well-adapted eye).

The duration of track luminescence is determined by the properties of the phosphor and is usually 10-4 to 10-7 sec in inorganic scintillators and as little as 10-9 sec in organic scintillators. Each centimeter of the track of an ionizing particle, even in the best scintillators, emits no more than 105 to 107 light quanta (photons). Therefore, the tracks cannot be photographed directly.

The first scintillation chamber was built in 1952 by the Soviet physicist E. K. Zavoiskii and his co-workers. Its main components are a scintillator, in which the tracks of ionizing particles are formed, and a highly sensitive electro-optical device, which makes it possible to increase the brightness of the image for observation by a nonadapted eye, as well as for photographic or television reproduction.

A diagram of one type of scintillation chamber is shown in Figure 1, a. In this type, crystals of cesium iodide (Csl) or anthracene are the scintillator, and a multistage image converter is used to enhance the brightness of the image. The objective projects an image of the particle track in the crystal onto the photocathode of a multistage image converter, which magnifies the brightness of the image by a factor of 105-106. The image appears on the luminescent output screen of the converter and can be photographed by a camera. 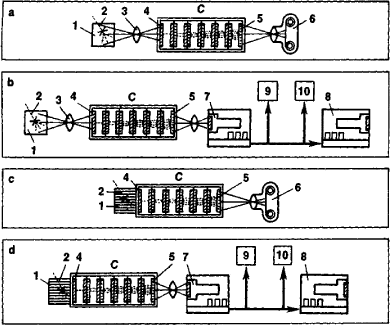 Figure l, b shows another type of scintillation chamber. In this type the image of the track magnified in brightness by the converter is not photographed directly but rather is first converted into a video signal by means of a television camera tube. As a result, the image can be reproduced on the screen of a remote television receiver or recorded by a magnetic tape recorder, or it may be fed as an output for additional processing by a highspeed electronic computer. Image brightness and contrast can be controlled by conventional methods used in radio engineering.

Some scintillation chambers use fiber optics: the light propagates from the track to the photocathode of the image converter because of complete internal reflection from the walls of thin tubes filled with a liquid scintillator or thin filaments consisting of a scintillating plastic, which together form the working volume of the scintillation chamber (Figure 1, c and d). Fiber optics provides an advantage (factors of tens or even hundreds) in the efficiency of light collection as compared with lenses, even the fastest lenses. However, at the same time the spatial resolution and clarity of the track image are degraded.

Tracks of ionizing particles in a scintillation chamber are in many respects analogous to those observed in thick-layer nuclear photographic emulsions, cloud chambers, diffusion chambers, spark chambers, and bubble chambers (track detectors). The width of luminescent traces of alpha particles does not exceed several microns. The numerous breaks are explained by quantum fluctuations, which are clearly manifested because of the low total number of photons from the track incident on the photocathode of the converter. Each point of light on photographs of the tracks of protons and relativistic mesons is formed by a single light quantum of luminescence, which has knocked out a photo-electron from the photocathode (Figure 1). The density of such points in the tracks is directly proportional to the magnitude of energy losses of particles in the substance. The advantage of a scintillation chamber as compared with other track detectors is the high time resolution, which is limited only by the length of the decay time of the scintillator, since the objective and the image converter are, in principle, capable of time resolution of the order of 10-13 to 10-14 sec.

Fast neutrons are usually recorded using recoil protons, which are generated during collisions of neutrons with the hydrogen atoms that are a component of scintillators. Slow neutrons are recorded using charged particles formed as a result of neutron-excited nuclear reactions. Scintillation chambers are also sensitive to electromagnetic radiation: X-ray and gamma quanta produce high-energy electrons in the chamber because of the photoelectric effect, the Compton effect, and pair production.

A scintillation chamber may also be used as a highly sensitive inertia-free detector for radio-autography, flaw detection, and X-ray detection.