device for detecting and measuring radiationradiation
, term applied to the emission and transmission of energy through space or through a material medium and also to the radiated energy itself. In its widest sense the term includes electromagnetic, acoustic, and particle radiation, and all forms of ionizing radiation.
..... Click the link for more information.  by means of tiny visible flashes produced by the radiation when it strikes a sensitive substance known as a phosphor (see phosphorescencephosphorescence
, luminescence produced by certain substances after absorbing radiant energy or other types of energy. Phosphorescence is distinguished from fluorescence in that it continues even after the radiation causing it has ceased.
..... Click the link for more information. ). Phosphors used in scintillation counters include zinc sulfide, sodium iodide, various liquids, and organic phosphors. The individual flashes are caused by absorption and reemission of radiation by the phosphor. They may be amplified by photomultiplier devices or amplified and converted to an electrical signal by photoemissive substances (see photoelectric effectphotoelectric effect,
emission of electrons by substances, especially metals, when light falls on their surfaces. The effect was discovered by H. R. Hertz in 1887. The failure of the classical theory of electromagnetic radiation to explain it helped lead to the development of
..... Click the link for more information. ). Scintillation counters may be used to detect the various types of radioactivityradioactivity,
spontaneous disintegration or decay of the nucleus of an atom by emission of particles, usually accompanied by electromagnetic radiation. The energy produced by radioactivity has important military and industrial applications.
..... Click the link for more information.  (alpha, beta, and gamma rays), cosmic rays, and various elementary particleselementary particles,
the most basic physical constituents of the universe. Basic Constituents of Matter

A particle or radiation detector which operates through emission of light flashes that are detected by a photosensitive device, usually a photomultiplier or a silicon PIN diode. The scintillation counter not only can detect the presence of a particle, gamma ray, or x-ray, but can measure the energy, or the energy loss, of the particle or radiation in the scintillating medium. The sensitive medium may be solid, liquid, or gaseous, but is usually one of the first two. The scintillation counter is one of the most versatile particle detectors, and is widely used in industry, scientific research, medical diagnosis, and radiation monitoring, as well as in exploration for petroleum and radioactive minerals that emit gamma rays. Many low-level radioactivity measurements are made with scintillation counters. See Particle detector

Scintillation counters are made of transparent crystalline materials, liquids, plastics, or glasses. In order to be an efficient detector, the bulk scintillating medium must be transparent to its own luminescent radiation, and since some detectors are quite extensive, covering meters in length, the transparency must be of a high order. One face of the scintillator is placed in optical contact with the photosensitive surface of the photomultiplier or PIN diode (see illustration). In order to direct as much as possible of the light flash to the photosensitive surface, reflecting material is placed between the scintillator and the inside surface of the container. 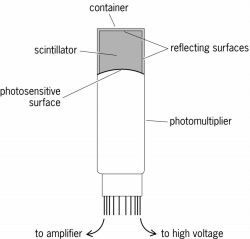 Diagram of a scintillation counter

In many cases it is necessary to collect the light from a large area and transmit it to the small surface of a photomultiplier. In this case, a “light pipe” leads the light signal from the scintillator surface to the photomultiplier with only small loss. The best light guides and light fibers are made of glass, plastic, or quartz. It is also possible to use lenses and mirrors in conjunction with scintillators and photomultipliers. See Optical fibers

When a particle passes completely through a scintillator, the energy loss of the particle is measured. When a gamma ray converts to charged particles in a scintillator, its energy may also be determined. When the scintillator is made of dense material and of very large dimensions, the entire energy of a very energetic particle or gamma ray may be contained within the scintillator, and again the original energy may be measured. Such is the case for energetic electrons, positrons, or gamma rays which produce electromagnetic showers in the scintillator. Energy spectra can be determined in these various cases by using electronic equipment to convert amplitudes of the output pulses from the photomultiplier or PIN diode to digital form, for further processing by computers or pulse-height analyzers.

() A radiation detector that is used in astronomy mainly for measurements of gamma rays. It consists of a layer of scintillator crystals that emit flashes of light when radiation passes through. Each scintillation is picked up by a photomultiplier and an amplified pulse of current is produced. These pulses can be counted electronically and the activity of the gamma-ray source can be measured. It is also possible to determine the distribution of energy of the gamma rays. The energy of the electrons liberated from the photocathode of the photomultiplier depends on the frequency of the emitted light, which in turn depends on the energy of the incident beam. It is possible to exclude radiation of energies other than those under consideration by suitable electronic circuitry.
Collins Dictionary of Astronomy © Market House Books Ltd, 2006
The following article is from The Great Soviet Encyclopedia (1979). It might be outdated or ideologically biased.

a device for detecting nuclear radiations and elementary particles, for example, protons, neutrons, electrons, gamma quanta, and mesons. The basic elements of a scintillation counter are a photomultiplier and a substance, called a scintillator, that luminesces under the action of charged particles.

The visual observation of flashes of light, or scintillations, produced by such ionizing particles as alpha particles and fission fragments was the principal method used by nuclear physics in the early 20th century (seeSPINTHARISCOPE). Scintillation counters were subsequently replaced by ionization chambers and proportional counters. Nuclear physics began employing scintillation counters again in the late 1940’s, when high-gain multistage photomultipliers capable of detecting extremely weak flashes of light came into use for the detection of scintillations.

A description of the principle of operation of a scintillation counter follows. When a charged particle passes through a scintillator, the particle ionizes and excites atoms and molecules. When they return to their unexcited, or ground, states, the atoms emit photons (seeLUMINESCENCE). The photons striking the cathode of

Figure 1. Schematic of a scintillation counter: quanta of light, or photons, cause electrons to be ejected from the photocathode; the cascade of electrons is amplified at each dynode

Various substances, including solids, liquids, and gases, are employed as scintillators. Plastic scintillators are widely used; they can be easily produced, can be mechanically processed, and yield intense luminescence. An important quantity characterizing a scintillator is the scintillation conversion efficiency η, which is the ratio of the produced light energy to the energy of a particle that is entirely absorbed in the scintillator material. The crystalline scintillators thallium-activated sodium iodide [NaI(TI)], anthracene, and zinc sulfide have the highest values of η. Another important characteristic quantity is the decay time τ, which is determined by the lifetime of the excited levels. The intensity of the luminescence after the passage of a particle varies exponentially: I = I0e– t/τ where I0 is the initial intensity. For most scintillators, τ lies in the range 10–9–10–5 sec. Plastics have short decay times (Table 1). The lower the value of τ, the more rapid can be the response of the counter.

In order for a scintillation to be recorded by a photomultiplier, the emission spectrum of the scintillator must match the spectral response of the photocathode of the photomultiplier, and the material of the scintillator must be transparent to its own radiation. In order to detect slow neutrons, lithium or boron is added to the scintillator. To detect fast neutrons, hydrogenous scintillators are used (seeNEUTRON DETECTOR). In the spectrometry of gamma quanta and high-energy electrons, thallium-activated sodium iodide is used; it has a high density and a high effective atomic number (seeGAMMA RADIATION).

A photomultiplier used in a scintillation counter should have a high-efficiency photocathode (up to 2.5 percent), high gain (106–108), and a small and highly stable electron-collection time (~10–8 sec). Such a collection time permits the scintillation counter to have a resolving time of not more than 10–9 sec. The high gain of the photomultiplier, together with a low level of intrinsic noise, makes possible the detection of individual electrons ejected from the photocathode. The signal at the anode of the photomultiplier can reach 100 volts.

and configurations, high reliability, and relatively low cost. Because of these qualities, scintillation counters are widely used in such areas as nuclear physics, the physics of elementary particles and cosmic rays, industry (radiation monitoring), dosimetry, geology, and medicine. The shortcomings of scintillation counters are a low sensitivity to particles with energies of approximately 1 kiloelectron volt or less and a relatively low energy resolution.

In the investigation of low-energy charged particles (<0.1 million electron volts) and fission fragments, gases are used as scintillators (Table 2). The gases exhibit a linear dependence of signal magnitude on particle energy within a broad range of energies, have a rapid response, and permit the stopping power to be varied by changing the pressure. Moreover, a source can be introduced into the volume of a gas scintillator. Gas scintillators, however, must be of high purity and require special photomulti-pliers with quartz windows, since a considerable portion of the emitted light is in the ultraviolet region.

[‚sint·əl′ā·shən ‚kau̇nt·ər]
(nucleonics)
A device in which the scintillations produced in a fluorescent material by an ionizing radiation are detected and counted by a multiplier phototube and associated circuits; used in medical and nuclear research and in prospecting for radioactive ores. Also known as scintillation detector; scintillometer.
McGraw-Hill Dictionary of Scientific & Technical Terms, 6E, Copyright © 2003 by The McGraw-Hill Companies, Inc.