1. Informal See snapshot
2. Brit a card game in which the word snap is called when two cards of equal value are turned up on the separate piles dealt by each player
3. American football the start of each play when the centre passes the ball back from the line of scrimmage to a teammate

[snap]
(meteorology)
A brief period of extreme (generally cold) weather setting in suddenly, as in a “cold snap.”

[snap]
(nucleonics)
A small nuclear power plant in which heat from radioisotope decay in a fuel such as strontium-90 is converted into electric energy, to provide power for spacecraft instrumentation, telemetry, and other applications. Derived from systems for nuclear auxiliary power. 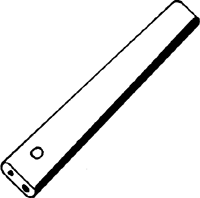 rivet set
A tool for shaping the head of a rivet.

(2)
1. <programming> To remove indirection, e.g. by replacing a pointer to a pointer with a pointer to the final target (see chase pointers).

The underlying metaphor may be a rubber band stretched through a number of points; if you release it from the intermediate points, it snaps to a straight line from first to last.

Often a trampoline performs an error check once and then snaps the pointer that invoked it so subsequent calls will bypass the trampoline (and its one-shot error check). In this context one also speaks of "snapping links". For example, in a Lisp implementation, a function interface trampoline might check to make sure that the caller is passing the correct number of arguments; if it is, and if the caller and the callee are both compiled, then snapping the link allows that particular path to use a direct procedure-call instruction with no further overhead.

Feedback
Flashcards & Bookmarks ?
Please log in or register to use Flashcards and Bookmarks. You can also log in with
Flashcards ?
My bookmarks ?
+ Add current page to bookmarks
TheFreeDictionary presents:
Write what you mean clearly and correctly.
Mentioned in ?
References in periodicals archive ?
"Score for Neonatal Acute Physiology: Validation in Three Kaiser Permanente Neonatal Intensive Care Units." Pediatrics 96 (5, Part I): 918-22.
Variation in the Use of Alternative Levels of Hospital Care for Newborns in a Managed Care Organization
(6) Nonstandard abbreviations: IL-6, interleukin-6; PCT, procalcitonin; CRP, C-reactive protein; NICU, neonatal intensive care unit; SNAP, Score for Neonatal Acute Physiology; SNAP-PE, SNAP-Perinatal Extension; GBS, group B streptococcus; PROM, prolonged rupture of membranes; CI, confidence interval; and SIR, systemic inflammatory response.
C-reactive protein, interleukin-6, and procalcitonin in the immediate postnatal period: influence of illness severity, risk status, antenatal and perinatal complications, and infection
The SNAP score (score for neonatal acute physiology) [8] is designed to measure severity of illness in all neonatal intensive care unit patients by measuring the severity of derangement in multiple organ systems.
Use of the laboratory in prediction of outcome in the high-risk newborn