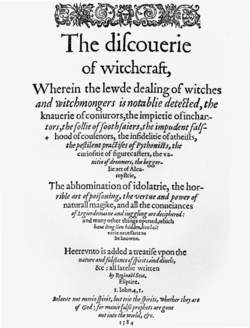 The first edition of Reginald Scot's The Discovery of Witchcraft was published in 1584. It was the first book published in English about witchcraft. It was also the most important book in English to attack the witchcraft delusion. Shakespeare got tips from it for his rendering of the witches of Macbeth, as did Middleton for his play, The Witch. When King James I ascended the throne in 1603, he ordered all copies to be destroyed. A second edition did not appear until 1651.

Reginald Scot was born in Kent. He attended Hart Hall, at Oxford University, which he later left without obtaining a degree. For a while he was a collector of subsidies for the government, was a member of Parliament for a year, and managed the estate of his cousin, Sir Thomas Scot, who supported him. He married twice but remained childless.

In 1574 he wrote The Hop Garden (its full name being A Perfect Platforme of a Hoppe-Garden and necessary instructions for the making and maintaining thereof), which led to the growth of hop production in his native county. But in 1582 he was shocked by the mass executions of witches at St. Osyth, in Kent, not far from his home. This led to Scot's writing of The Discovery of Witchcraft, in which he attacked the persecution, blaming the whole delusion on the Inquisition. In 1582, fourteen women had been charged with witchcraft in the village of St. Osyth, near Brightlingsea, in Essex. They were put to death, the vast majority of the evidence in the trial having come from children six to nine years of age.

Scot had previously been alerted by the story of seventeen-year-old Mildred Norrington, who, reputedly with an evil spirit speaking through her, had accused an old woman named Alice of Westwell of working evil witchcraft. But Mildred was exposed as a ventriloquist and finally confessed. This happened less than six miles from Scot's home. Similarly, two women, Agnes Bridges and Rachel Pinder, in London, had claimed to be bewitched and appeared to vomit straw and pins. They, too, were revealed as frauds. Such cases alerted Scot to the possibility of fraud, and he came to view all charges of witchcraft with some skepticism.

Although he was not a lawyer, Scot filled his book with references indicating a legal way of thinking. He also exhibited a fine knowledge of theology and scripture. He attended many trials and investigated many alleged cases of witchcraft. Onethird or more of his book is devoted to showing the methods used by sleight-ofhand performers, conjurers, and stage magicians. No form of dabbling with the supernatural was left unexposed.

In his attack on the phenomena of witchcraft, Scot had to deal with so-called facts that were not susceptible to material explanations. It became necessary for him to attack the theological conception of a Devil based on the nature of spirits. He said that "witchcraft is a cousening art, wherein the name of God is abused, prophaned and blasphemed, and his power attributed to a vile creature (the Devil) . . . it is a supernaturall worke, contrived betweene a corporall old woman, and a spirituall divell. The maner thereof is so secret, mysticall, and strange, that to this daie there hath never beene any credible witnes thereof." He said that most accused witches were commonly old, lame, bleary-eyed, pale, foul, and full of wrinkles. He went on to detail how such an old woman could fall upon hard times, go begging to her neighbors and be turned away, then be suspected of cursing the one who had rejected her and of causing what would otherwise be seen as natural mishaps.

Scot was careful not to totally deny the existence of witches, since that would have been to deny the Bible. But he showed very forcefully that those accused of witchcraft were invariably not operating with powers from the Devil. At the time, few men dared speak as Reginald Scot had done. His book was almost certainly studied by George Gifford, who, in 1587, wrote A Discourse of the Subtill Practises of Devilles by Witches and, in 1593, A Dialogue Concerning Witches and Witchcrafts, both of which were meant to end the punishment of innocent women.