city (2010 pop. 10,031), Coconino and Yavapai co., N Ariz., 22 mi (35 km) SSW of Flagstaff on Oak Creek in the Coconino National Forest; est. 1902, inc. 1988. Tourism is Sedona's main industry. The city is located in an area of spectacular red sandstone buttes and mesas; the scenery has made the area popular with Hollywood filmmakers as well as tourists. The Chapel of the Holy Cross, built into a red rock cliff, is there. Red Rock State Park is to southwest, Oak Creek Canyon and Slide Rock State Park are to the north, and Prescott National Forest is to the west and south.
The Columbia Electronic Encyclopedia™ Copyright © 2013, Columbia University Press. Licensed from Columbia University Press. All rights reserved. www.cc.columbia.edu/cu/cup/ 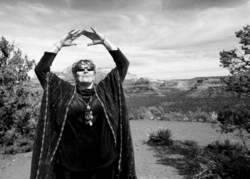 New Ager Jody Glittenberg tries to capture spiritual energies in Sedona, Arizona. In the later half of the twentieth century, the tourist town began to be associated with supernatural forces. Getty Images.

A town in northwest Arizona, Sedona sits under the rim of the Colorado Plateau and provides residents a less extreme climate than the large deserts to the south and east. It was founded in 1901 by Carl and Sedona Schnebly. It developed into a retirement center and artists colony, and more recently emerged as a tourist draw.

The largely secular nature of the community stands in contrast to its prehistory. The area around Sedona had once been the subject of religious stories by the Hopi, Apache, and Havasupai tribes. Some of these native peoples associate their creation myths with the spectacular geography of the region. In the decades after World War II, various individuals began to tout the area as being a place where spiritual forces were particularly active.

The metaphysical side of Sedona can be traced back to 1957, when Mary Lou Keller moved there and opened the Sedona Church of Light. She sponsored weekly meetings at which the tapes made by Los Angeles metaphysical teacher Manly Palmer Hall were played. Keller was joined in the 1960s by Evangeline and Carmen Van Pollen, who headed a group in the “I AM” Ascended Masters tradition called the Ruby Focus of Magnificent Consummation, which regularly published messages received from the Ascended Masters. They were then joined by Spiritualist minister Judy Fisher, who opened what she called the New Age Center. The center evolved into the Church of the Living God, which held weekly Spiritualist services.

Throughout the 1960s and 1970s, Sedona grew, as did both its traditional and alternative religious communities. However, things began to change in the 1980s. Around this time, psychic Page Bryant claimed to have discovered several vortexes of psychic energy in the hills around Sedona. This claim integrated well with accepted understandings of sacred sites in the New Age Movement. Many New Age enthusiasts were consequently attracted to Sedona, where they encountered both the beautiful scenery and a welcoming spiritual community. Bryant’s observations were elaborated upon by a number of New Age writers, such as Dick Sutphen, Tom Dongo, and Richard Dannelley.

Given the permeation of the idea of Sedona as a site alive with spiritual energy, it was not surprising that in 1987 it was singled out by José Arguelles as one of the major locations to celebrate the “Harmonic Convergence,” a moment of peaking by cosmic forces derived from Arguelles’ reading of Mayan prophecies. On August 16 and 17, 1987, thousands of New Age believers gathered together in the hope that the energy released through the cosmos on that day would facilitate a major shift in human consciousness. For Sedona, the event served to further its reputation as a place particularly favorable to New Age enterprises. It has become especially identified with channeling, the practice formerly called mediumship in which gifted individuals contact and allow various spiritually evolved entities to speak through them.

Today, in the relatively small community one can find a significant array of channelers, metaphysical centers, spiritual retreats, and occult bookstores. One major national newsstand periodical, built around the material produced by channelers, the Sedona Journal of Emergence, is published there monthly. The associated Light Technology Publications also annually releases a number of books about channeling.

Feedback
Flashcards & Bookmarks ?
Please log in or register to use Flashcards and Bookmarks. You can also log in with
Flashcards ?
My bookmarks ?
+ Add current page to bookmarks
Mentioned in ?
References in periodicals archive ?
"This was really nice to win the championship," said senior attacker Sedona Falco, who scored 4 goals and had 3 assists.
Girls lacrosse: Barrington rolls past Fremd
The auction will be jointly organized by the foundation and Sedona Hotel Yangon.
Suu Kyi's bronze sculpture up for auction to raise funds
Sedona, AZ, May 16, 2018 --(PR.com)-- Inspired by the Oak Creek Canyon and vortexes of Sedona, Arizona, recording artist Bruce Lev began experimenting in the "Chill" and "New Age" genres of music, and with the help of the amazing musical talents of Mark 4Man and the engineering prowess of Ryan Wenzel at Arrowhead Studio in Peoria, Arizona, Bruce transformed his Beatlesque style of songwriting and producing by sending them "Through the Vortex" of Sedona to form a new and unique sound and style, hence coined by Bruce as "Chill Age" music.
Bruce Lev Releases Chill/New-Age Album "Through the Vortex - The Sedona Effect"
11 April 2017 - US-based real estate investor and operator MG Properties Group has acquired the Las Vegas, US multifamily properties Sedona at Lone Mountain and Prelude at the Park Apartments, the company said.
MG Properties Acquires Two Las Vegas Multifamily Properties for USD 68m
Auto Business News-October 5, 2016--The Insurance Institute for Highway Safety honours 2017 Kia Sedona
The Insurance Institute for Highway Safety honours 2017 Kia Sedona
The senior financing is secured by Sedona Slate, a 2013-constructed, 474-unit, Class-A multifamily apartment property in Rosslyn, Virginia.
ASB leverages luxury Virginia asset for $105m loan
Wealthy investors in Sedona, Arizona, are dropping dead.
Murdock Rocks Sedona
M2 EQUITYBITES-October 6, 2015-US Real Estate Brokerage Coldwell Banker Buys Sedona, Arizona Company
US Real Estate Brokerage Coldwell Banker Buys Sedona, Arizona Company
BANKING AND CREDIT NEWS-July 31, 2015-PrimeLending expands Sedona branch with addition of senior loan officer
PrimeLending expands Sedona branch with addition of senior loan officer
If you are interested in majestic landforms, scenic drives, pleasant weather, a place where ancient meets contemporary, and a small town vibe, then the city of Sedona is the place for you.
Wonders of Arizona's Red Rock Country
But the Sedona is better-looking than your average minivan, with outstanding features and ergonomics -- and a 10-year, 100,000-mile warranty; and the Sedona starts at $26,795, some $3,000 less than the most-affordable Odyssey, the LX.
Dollar-wise alternative for families