Also found in: Dictionary.
Related to Seismic Waves: Richter scale
The following article is from The Great Soviet Encyclopedia (1979). It might be outdated or ideologically biased.

Figure 1. Block diagram of oscillations in a compressional wave (a) and a shear wave (b)

Compressional waves (P waves) transmit changes of volume in a medium; that is, they transmit compression and extension. Oscillations in such waves occur in the direction of propagation (Figure l, a). Shear waves (S waves) do not cause volumetric changes in the medium; they are oscillations of particles in a direction perpendicular to the direction of wave propagation (Figure l, b). At each moment and at each point in the medium, seismic oscillations satisfy the wave equations (for P and S waves). In a homogeneous, isotropic, elastic medium, the propagation velocities of compressional (a) and shear (b) waves are determined by the formulas

Here, k + (4/3)μ = λ + 2μ, k is the bulk modulus, and λ and μ are Lame constants; μ is referred to as the shear modulus. The velocity of compressional waves is greater than that of shear waves.

The following phenomenon is characteristic of the propagation of seismic waves (elastic waves in a solid medium): when such waves obliquely strike the boundary between media with different parameters (such as propagation velocities and densities) for a given type of wave (such as a compressional wave), reflected and refracted shear waves arise, in addition to reflected and refracted compressional waves (Figure 2). Surface waves arise in the earth near the surface of a boundary. When an inhomogeneous SH wave is propagated along a horizontal layer a Love wave arises. When a P wave strikes the plane of a boundary, reflected P and SV waves may arise in the layer. In this case, if α2> β2 > α1 > β1, where α1 and β1 are velocities in the layer and α2 and β2 are velocities in a nonadjacent medium, then the reflected SV wave for a small e1 possesses the property of total internal reflection, just as the reflected P wave does. As a result, Rayleigh waves form in the layer. Like Love waves, Rayleigh waves are dispersive of velocity. They arise in a half-space without stratification. Rayleigh waves do not disperse and their velocity c ≈ 0.9 β.

Figure 2. Reflection and refraction of P waves at a boundary

P and S waves are propagated from the source through the body of the earth and are called body waves. For a homogeneous and isotropic medium, their amplitude diminishes in inverse proportion to the distance. Surface waves propagate along the surface and possess an amplitude that diminishes in inverse proportion to the square root of the distance. For this reason, surface waves are dominant in terms of amplitude for oscillations from remote earthquakes.

As a result of changes in the properties of the earth with increasing depth, the propagation velocities of body waves also change; this brings about refraction of the waves in the earth’s interior. 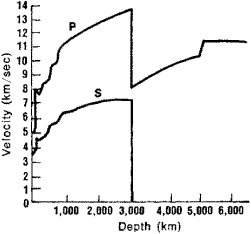 Figure 3. Velocity of compressional (P) and shear (S) waves as a function of depth

Feedback
Flashcards & Bookmarks ?
Please log in or register to use Flashcards and Bookmarks. You can also log in with
Flashcards ?
My bookmarks ?
+ Add current page to bookmarks
Mentioned in ?
References in periodicals archive ?
"Those which break at the surface, similar to the waves breaking on the beach, and the standing wave that just keeps on going and is similar to the seismic waves on earth.
Uni experts' giant blue star theory proved to be true
Scientists have been stumped by the 20-minute rumble of a mysterious seismic wave which was detected earlier this month, Sky News reports.
Mysterious earthquake rumbled around world
However, researchers encountered a mystery while conducting these studies -&nbsp;the seismic waves appear to gain speed while passing through super-old rock formations dubbed cratons.
Massive Stash Of Diamonds Likely Hidden Deep Within Earth
Geological Survey, the team created a three-dimensional model of the velocities of seismic waves that traveled through the planet's major cratons.
A Stash of a Quadrillion Tons of Diamonds May Be Hiding Deep Inside Earth
Their work will help show how different seismic wave frequencies of ground motion affect structures of various sizes.
Researchers Use Supercomputers to Quantify Quake Risk
"We used the seismology of the shallow mantle--the rate at which seismic waves travel through the Earth below its crust--to make inferences about the deeper mantle," says Jackson, assistant professor in the Department of Earth Science.
Primordial Reservoirs Fuel Volcanic Hotspots
"We wanted to see if we could detect these ground signals, then work backwards and create a model for the seismic waves generated by the tornado along its entire path," Valovcin explains.
SEISMIC WAVES PROVIDE DATA ON TORNADO INTENSITY AND TOUCHDOWN
Figure 7, under the action of horizontal seismic waves, to the left tunnel, the vault and right spandrel are tensiled and the others are compressed.
Seismic Response of Tunnel Lining for Shallow-Bias Tunnel with a Small Clear Distance under Wenchuan Earthquake
The ambient noise around the frequency can be explained as a persistent seismic wave field excited by ocean swell activity and is a significant source of noise in observations of seismic waves from earthquakes.
Ambient seismic wave field
The velocity magnitude of the resulting seismic waves is denoted by colors, with the warmer colors corresponding to higher particle velocities.
Novel seismic software sheds light on earthquake paths: researchers achieve record performance in new seismic simulations
Also, since the core is nearly 3,500 miles deep and cannot be accessed, the only way to study it is by monitoring how seismic waves travel through it.
The Missing Element In Earth's Core
They proposed two empirical relationships between the maximum water wave height and the peak ground acceleration for low- and high-frequency seismic waves, respectively [18].
Shallow-Water-Equation Model for Simulation of Earthquake-Induced Water Waves