A member of the dvorianstvo (nobility or gentry), Semenov graduated from the natural science division of the University of St. Petersburg in 1848. Beginning in 1849, he took part in expeditions on the East European (Russian) Plain. His connection with the Geographic Society also began in 1849. Between 1853 and 1855 he studied geography and geology in Germany, Switzerland, Italy, and France. He translated K. Ritter’s Geography of Asia into Russian and supplemented it with materials on Asiatic Russia. 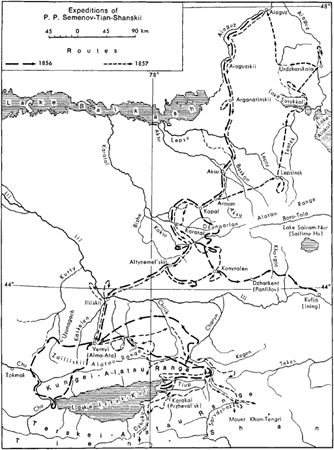 In 1856 and 1857, Semenov explored the Tien-Shan (see map of Semenov’s expeditions). He made the first map of the mountain system’s orography and altitudinal zonation. He discovered thick glaciation in the presence of a high-altitude snow line; this phenomenon was correctly attributed by him to the arid climate. His scientific study of the Tien-Shan was commemorated 50 years later by the addition of “Tian-Shanskii” to his surname.

In 1859 and 1860, Semenov was a consulting member of the Editing Commission that prepared the Peasant Reform of 1861. He headed the Central Statistical Committee from 1864 to 1874 and the Statistical Council from 1874 to 1897. Semenov organized the first congress of Russian statisticians, a number of important statistical studies, and, in 1897, Russia’s first general census. He created the system of economic regions of European Russia. K. Marx and V. I. Lenin made use of his economic and statistical works.

Semenov’s work in the Geographic Society marked an entire era in exploration. For example, he assisted in the organization of N. M. Przheval’skii’s expedition to Central Asia and N. N. Miklukho-Maklai’s expedition to New Guinea. Semenov directed the compilation of several multivolume works on the geography of Russia: Geographical-Statistical Dictionary of the Russian Empire, Picturesque Russia, and the multivolume publication Russia.

The insect collections assembled by Semenov include approximately 700,000 specimens and are preserved in the Zoological Museum of the Academy of Sciences of the USSR.

Semenov’s liberal views were progressive for his time. They were shaped during his participation in the Petrashevskii circle and showed themselves in his struggle for the emancipation of the peasants with land and in his selfless aid to political exiles. He obtained amnesty or mitigation of punishment for many exiles and encouraged several, such as G. N. Potanin and I. D. Cherskii, to engage in exploration.

A number of geographic objects in Middle Asia, Central Asia, the Caucasus, Alaska, and Spitsbergen and approximately 100 new plant and animal forms have been named after Semenov. The Geographic Society of the USSR has established a gold medal in his honor.