Also found in: Dictionary, Thesaurus, Medical, Legal, Wikipedia.
Related to semicircular canals: utricle
The following article is from The Great Soviet Encyclopedia (1979). It might be outdated or ideologically biased.

Each ampulla of the semicircular canals has sensory hair cells, grouped in a crista, or crest. Over the crista is a gelatinous cupula, into which these hair cells enter. The bases of the sensory cells are entwined with fibers of the vestibular nerve, which transmit excitation to the brain. Changes in the position of the head or body, accompanied by shifting of the cupulae and endolymph, and by displacement of the otoliths suspended in the endolymph, cause stimulation of the hairs and of the sensory cells of the semicircular canals. This leads to the transmission of an electrical discharge along the nerve and into the brain. From the brain the nerve impulses are directed to the muscles and the other organs that regulate the body’s orientation. 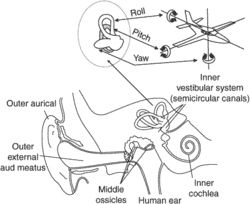 The two sets of three canals in the human ear, which are at right angles to each other. The set of semicircular canals acts to sense angular rotation about each of the three axes. Each of the canals is filled with fluid, and there is a flaplike structure called a cupula at the end of each canal.
These canals are the main vestibular organs that give us a sense of spatial orientation in the absence of visual clues. The system is unable to sense small angular velocities and thus is nearly useless in flight, often sending false signals to the brain.
An Illustrated Dictionary of Aviation Copyright © 2005 by The McGraw-Hill Companies, Inc. All rights reserved

Feedback
Flashcards & Bookmarks ?
Please log in or register to use Flashcards and Bookmarks. You can also log in with
Flashcards ?
My bookmarks ?
+ Add current page to bookmarks
Mentioned in ?
References in periodicals archive ?
Inner ear presentations of patients include dysplastic vestibule, cochlear hypoplasia with defective modiolus, EVA, hypoplastic semicircular canals, and dilated internal auditory canals.
Genetic Causes of Inner Ear Anomalies: a Review from the Turkish Study Group for Inner Ear Anomalies
In the literature, it has been determined that the worst prognoses are for cochlear fistulas and the best are for fistulas of the lateral semicircular canal (10).
Assessment of Bone Conduction Thresholds After Surgical Treatment in Patients with Labyrinthine Fistula
Video head impulse testing (vHIT) and the assessment of horizontal semicircular canal function.
The head impulse test as a predictor of videonystagmography caloric test lateralization according to the level of examiner experience: A prospective open-label study
Superior semicircular canal dehiscence presenting as conductive hearing loss without vertigo.
Semicircular superior canal dehiscence: cases reports/Sindrome da deiscencia do canal semicircular superior: relato de dois casos
BPPV is often accompained with nausea, vomiting, (27) and is usually caused by dislodged otoconia in the posterior semicircular canal. Episodic vertigo continues for many weeks and then resolves spontaneously, but, in some cases, it is recurrent.
Assessing and managing patients with dizziness--Part 1
Maximum malformations found in a single ear were 7 structural malformations which included malformation of cochlea, modiolus, vestibule, vestibular aqueduct, semicircular canals, internal auditory canal, and vestibulocochlear nerve.
Radiological assessment of the Indian children with congenital sensorineural hearing loss
This study aimed to develop an FE model for a human membranous labyrinth, including the utricle and three membranous semicircular canals, and to examine the vestibular response to a caloric test with different head positions.
A biomechanical model of the inner ear: numerical simulation of the caloric test
"Almost in every case where there is a fossilized skull, the semicircular canals are present and well preserved," Timothy Ryan, assistant professor of anthropology, geosciences and information sciences and technology, Penn State, said.
Inner ear may shed light on ancient primate behaviour
How the ear works The inner ear has two parts - the cochlea and the semicircular canals.
Welsh firm launches 'funky' hearing protection for young music-lovers; Experts sound alarm over increasing rates of noise-induced deafness
Vertigo may originate in the vestibular system, consisting of the fluid-filled semicircular canals and the utricle, hair cells topped with crystals known as otoconia.
Seek help to combat dizziness and stop the spinning: an array of conditions can cause this common disorder; detailing your symptoms is key to identifying a cause and restoring your balance
* The vestibular system of each inner ear (semicircular canals, utricle and saccule) controls rotatory movements and orientation in, to and fro, up and down, and angular movements.
The dizzy patient--a 5-minute approach to diagnosis
BPV occurs when otoconia dislodge from the utricle and lodge in the semicircular canals. During head movement, the otoconia can stimulate the canals, which is interpreted as a sense of whirling dizziness and unbalance.
Bone loss may contribute to benign positional vertigo