The conductivity of a semiconductor is proportional to the number of electrical carriers (electrons and holes) it contains. In a temperature-compensating diode, or thermistor, the number of carriers changes with temperature. See Thermistor

In a photoconductor the semiconductor is packaged so that it may be exposed to light. Light photons whose energies are greater than the band gap can excite electrons from the valence band to the conduction band, increasing the number of electrical carriers in the semiconductor. See Photoconductivity

In some semiconductors the conduction band has more than one minimum. This results in a region of negative differential conductivity, and a device operated in this region is unstable. The current pulsates at microwave frequencies, and the device, a Gunn diode, may be used as a microwave power source.

A rectifying junction is formed whenever two materials of different conductivity types are brought into contact. Most commonly, the two materials are an n-type and a p-type semiconductor, and the device is called a junction diode. However, rectifying action also occurs at a boundary between a metal and a semiconductor of either type. If the metal contacts a large area of semiconductor, the device is known as a Schottky barrier diode; if the contact is a metal point, a point-contact diode is formed. See Schottky effect

The contact potential between the two materials in a diode creates a potential barrier which tends to keep electrons on the n side of the junction and holes on the p side. When the p side is made positive with respect to the n side by an applied field, the barrier height is lowered and the diode is forward biased. Majority electrons from the n side may flow easily to the p side, and majority holes from the p side may flow easily to the n side. When the p side is made negative, the barrier height is increased and the diode is reverse-biased. Then, only a small leakage current flows: Minority electrons from the p side flow into the n side, and minority holes from the n side flow into the p side. The current-voltage characteristic of a typical diode is shown in the illustration. Rectifying diodes can be made in a variety of sizes, and much practical use can be made of the fact that such a diode allows current to flow in essentially one direction only. Current-voltage characteristic of a pn junction
McGraw-Hill Concise Encyclopedia of Physics. © 2002 by The McGraw-Hill Companies, Inc.
The following article is from The Great Soviet Encyclopedia (1979). It might be outdated or ideologically biased.

The most numerous semiconductor diodes are those whose operation is based on the properties of a p-n junction. If a forward voltage, or forward bias, is applied to a p-n junction diode (Figure 1)—that is, if a positive potential is supplied to the p- region of the junction—the potential barrier at the junction is lowered, and there begins an intensive injection of holes from the p-region into the n-region and of electrons from the n-region into the p-region. A high forward current results (Figure 2). In the case of a reverse bias, where the voltage is applied in the reverse direction, the potential barrier is raised, and only a very small reverse current of minority carriers flows across the p-n junction. Figure 3 shows the equivalent circuit for such a semiconductor diode. 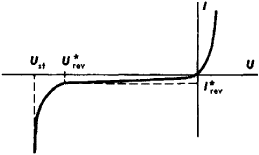 Note on Figure 2. Typical volt-ampere characteristic of a semiconductor diode with a p-n junction: (U) voltage across the diode, (l) current through the diode,

The operation of rectifier power diodes is based on a pronounced asymmetry of the volt-ampere characteristic. Semiconductor diodes for rectifying devices and for other high-current circuits are manufactured for permissible rectified currents Ir of up to 300 amperes (A) and for maximum permissible reverse voltages U*rev from 20–30 volts (V) to 1–2 kilovolts (kV). Semiconductor diodes for similar applications in low-current circuits have an Ir of less than 0.1 A and are called general-purpose diodes. At voltages greater than U*rev. the current rises drastically, and an irreversible (thermal) breakdown of the p-n junction occurs that results in the breakdown of the diode.

In order to increase U*rev to several tens of kV, rectifier stacks are used. In such a stack, several identical rectifying semiconductor diodes are connected in series and are mounted in a common plastic casing. The time lag exhibited by rectifier diodes depends on the lifetime of the injected holes, which is greater than 10-5-10-4 sec. This time lag limits the frequency range within which semiconductor diodes can be used to, usually, 50 to 2,000 hertz.

The use of special techniques—primarily the doping of germanium and silicon with gold—has permitted a reduction in the switching time to 10-7—10–10 sec and the construction of fast-acting pulsed semiconductor diodes. Such diodes, as well as diode matrices, are used mostly in the low-current signal circuits of electronic computers. The reverse current of a diode is subject to considerable fluctuations in the prebreakdown region. This property of the p-n junction is made use of to construct noise generators. The time lag during the development of an avalanche breakdown in a p-n junction is 10-9-10–10 sec. It leads to a phase shift between the current and the voltage in the diode and thus can cause the generation of ultrahigh-frequency oscillations if the diode is connected to an appropriately designed electric circuit. This property has been successfully made use of in avalanche transit time diodes, which have permitted the construction of oscillators with frequencies up to 150 gigahertz.

Mixer diodes and video detectors are used for the detection and conversion of electric signals in the microwave region. In most of these devices the p-n junction is formed under a point contact. This design provides a low value of the capacitance CB (Figure 3). Also, as in all microwave diodes, structural features that are specific to each type provide low values of the parasitic inductance Lc and capacitance Cc and permit the diode to be installed in wave-guide systems.

When a reverse bias not exceeding U*rev is applied to the p-n junction, the junction behaves as a high-Q capacitor, whose capacitance CB depends on the magnitude of the applied voltage. This property is made use of in varicaps, which are used primarily for electronic tuning of the resonant frequency of oscillatory circuits; in parametric semiconductor diodes, which are used to amplify microwave oscillations; and in varactors and multiplier diodes, which are used to multiply the frequency of oscillations in the microwave range. In such diodes efforts are made to reduce the magnitude of the resistance rb (the basic source of active energy losses) and to increase the dependence of the capacitance CB on the voltage Urev.

In a p-n junction made with a very low-ohm (degenerate) semiconductor, the region depleted of charge carriers is very thin (> 10-2 micron). For such a region, tunneling becomes an important mechanism for the passage of electrons and holes across the potential barrier. The operation of the tunnel diode is based on this effect. Tunnel diodes are used in superfast pulse devices, such as multivibrators or triggers, and in amplifiers and generators of microwave oscillations. The same effect provides the basis for the operation of backward diodes, which are used as detectors of weak signals and as mixers of microwave oscillations. The volt-ampere characteristics of tunnel and backward diodes (Figure 4) 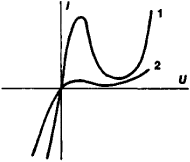 differ substantially from the volt-ampere characteristics of other semiconductor diodes. The differences include the existence of a region of negative conductivity, which is strongly pronounced in the case of the tunnel diode, and high conductivity at zero voltage.

The p-i-n-structure has the property of changing its characteristics when irradiated. This property is made use of, in particular, in photodiodes and nuclear radiation detectors. These devices are constructed in such a way that the photons or nuclear particles can be absorbed in the crystal’s active region, which is immediately adjacent to the p-n junction, and can change the magnitude of the reverse current of the junction. Light-emitting diodes make use of the effect of radiative recombination of electrons and holes: because of this effect, certain p-n junctions exhibit luminescence when a forward current passes through them. Semiconductor lasers can also be classified as semiconductor diodes.

In the USSR, semiconductor diodes are identified by a six-character code. The first two characters are letters: the first denotes the semiconductor being used, and the second letter indicates the class of the diode. Three digits follow that show the number of the type. The sixth character is a letter that identifies the group of the diode. For example, GD402A is a germanium general-purpose diode, and KS196B is a silicon voltage-stabilizing diode.

Semiconductor diodes are superior to their electron-tube analogs—such as kenotrons, gas-discharge voltage stabilizing tubes, and gas-discharge indicators—in that they have considerably greater reliability, a longer service life, smaller size, better technical characteristics, and lower cost. For these reasons, semiconductor diodes are supplanting electron-tube devices in most areas of application.

[¦sem·i·kən¦dək·tər ′dī‚ōd]
(electronics)
Also known as crystal diode; crystal rectifier; diode.
A two-electrode semiconductor device that utilizes the rectifying properties of a pn junction or a point contact.
More generally, any two-terminal electronic device that utilizes the properties of the semiconductor from which it is constructed.
McGraw-Hill Dictionary of Scientific & Technical Terms, 6E, Copyright © 2003 by The McGraw-Hill Companies, Inc.