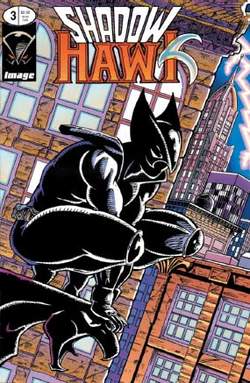 At first, he appeared to be a particularly brutal vigilante, moving through the shadows of the New York City night. Wearing a silver helmet, clawed gloves, and a dark armored costume, and with a propensity to break the backs of those who had murdered others, everyone wondered, “Who is ShadowHawk?” Not even the readers of the ShadowHawk comic knew the answer to that question at first, as writer/artist Jim Valentino had created the series with a mystery at its core. Coming off successful runs on Marvel’s Guardians of the Galaxy, What If?, and other series—and with the legendary superhero spoof normalman (1984–1985) behind him—Valentino joined six other popular creators to form Image Comics in 1992.

The debut book to appear from Valentino at Image was ShadowHawk #1 (August 1992), the first of a four-issue miniseries. The initial storyline set up the mystery of who the character was, providing lots of supporting-cast suspects for readers to choose from. In ShadowHawk vol. 2 #1-#3 (May-July 1993), the secret was revealed. ShadowHawk was really Paul Johnstone, an African American man who had been infected with the HIV virus. Johnstone used the suit to avenge those who had been killed unjustly. Villains that ShadowHawk fought included a racist named Hawkshadow, the hedonist group Regulators, an acidic alien named the Liquifier, and a female kingpin of crime known as Vendetta.

Although AIDS had been seen in comics before—Megaton #4 (April 1986) contains the comics world’s first reference to the disease— ShadowHawk was the first superhero to suffer from the disease. Valentino chose not to sensationalize the subject, and actively tried to dispel stereotypes and misconceptions about AIDS while telling his stories. Johnstone succumbed to the illness in ShadowHawk Vol. 3 #18 (May 1995), the final issue of that series.

The New ShadowHawk #1 debuted in June 1995, written by Kurt Busiek. In it, the “ShadowHawk energy” was dispersed between three people and a robot. Combined with a tale told by superstar writer Alan Moore in ShadowHawks of Legend (November 1995), Busiek’s stories noted that there had always been ShadowHawks throughout time, in different lands and eras. The energy was actually the essence of an ancient Egyptian shaman who worshipped Horus (an extraterrestrial from Sirius). When the shaman was murdered, his spirit became ShadowHawk and sought revenge for those murdered unjustly. The ShadowHawk essence lived within the silver helmet that Johnstone had worn.

In a series of stories that ran through various titles from Extreme Studios (an Image sub-imprint run by Rob Liefeld), seventeen-year-old Eddie Collins became the latest ShadowHawk. Able to channel power from the gods, and sharing the memories of all the previous ShadowHawks, Collins is also aided by the morphing suit; it enhances his strength and agility, gives him infrared vision, and allows him to shoot grappling hooks from his gauntlets.

Feedback
Flashcards & Bookmarks ?
Please log in or register to use Flashcards and Bookmarks. You can also log in with
Flashcards ?
My bookmarks ?
+ Add current page to bookmarks
TheFreeDictionary presents:
Write what you mean clearly and correctly.
Mentioned in ?
References in periodicals archive ?
In 2012, a Texas sheriff's department used a US Department of Homeland Security grant to buy a $300,000 Vanguard Shadowhawk drone.
India to become first country to use weaponized drones for crowd control
If I had any criticism of the novel, it would be that there is too much time spent on Roen getting in shape and training to be a Prophus agent, and not enough time on showing the war between the two opposing Quasing factions." SHADOWHAWK
The Lives of Tao
This agency recently purchased a $300,000 ShadowHawk drone and is apparently excited about its potential.
Attack of the drones: the proliferation in the use of drones overseas and at home threatens timeless principles of constitutional liberty, including due process and the prohibition of unlawful searches and seizures
The very economical and robust ArrowHawk is ideally suited for air tours, air taxi, and like GBA's new, smaller two-seat ShadowHawk Gyroplane, airborne observation.
Groen Brothers Aviation Introduces ArrowHawk Gyroplane at Airshow China in Zhuhai
"I couldn't be more proud of all of the Shadowhawk sailors," said Cmdr.
Navy Newsstand (Dec. 13, 2005): Shadowhawks overcome challenges, establish land-based Prowler presence in Iraq
Cook, "Uncovering the Mystery of Shadowhawk," Securi Management, May 1990, p.
Costly callers: prosecuting voice mail fraud
Facts developed during a one-week trial established that between July and September 1987, the hacker, under the code name Shadowhawk, used a modem on his home computer to gain unauthorized remote access to AT&T computers in Illinois, New Jersey, North Carolina, and Georgia and stole copies of copyrighted AT&T source code worth over $1,120,000.
Uncovering the mystery of Shadowhawk
Ernest Winston, commanding officer of the VAQ; 141 Shadowhawks. "As adversaries become more advanced, it requires us to adjust our tactics accordingly.
2014 valiant shield exercise concludes
The Shadowhawks of VAQ-141 deployed in the spring of 2011 aboard the USS George H.
All roads lead to information dominance: advanced technology underpins navy's information dominance capability and vision
Caption: Sailors aboard USS George Washington (CVN 73) prepare to launch an EA-2.8G Growler from the VA 0-2.4.1 Shadowhawks 31July.
People-Places-Planes
Caption: An EA-18G Growler from the the VA 0-141 Shadowhawks lands aboard USS George Washington (CVN 73).
Professional reading
Miller as commanding officer of the VAQ-141 Shadowhawks on 15 February at Andersen AFB, Guam.
People-places-planes