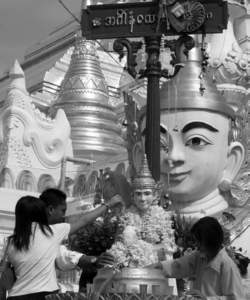 The Shwedagon Pagoda is a stupa in Yangon, Myanmar, that contains several hairs from Gautama Buddha, according to legend. It is one of the holiest and most beautiful of religious sites in the country. AFP/Getty Images.

Shwedagon Pagoda is the most sacred Buddhist site in Myanmar. It is a stupa whose golden dome rises 98 meters (321.5 feet) high, and is plated with 53 tons of gold. On its tope are 5,400 diamonds, together measuring some 2,000 carats. The pagoda is located in Yangon, Myanmar’s capital. Prior to the middle of the eighteenth century, Yangon was a small fishing village named Bagan. The British turned it into the capital of the country (then called Burma), in 1885. During the British era, which ended in 1948, it was known as Rangoon.

According to legend, Shwedagon Pagoda predates even the fishing village. In the fifth century BCE, just as the land was emerging out of prehistory, two Burmese merchants visited Gautama Buddha in India. They found him sitting under the Bodhi Tree, just 49 days after he attained Enlightenment. Buddha gave them eight strands of his hair, which the two men brought back with them to their homeland. In conjunction with the local ruler, they enshrined the hairs in a casket on Singuttara hill. Reportedly, there was already a shrine housing relics of three earlier enlightened ones. Over the shrine a stupa was erected. The whole complex of stupas and the monastic building have been greatly expanded since 1769.

Surrounding the central structure of the pagoda are four shrines for the principal Buddhas, and eight smaller shrines based on the signs of the Burmese zodiac. Surrounding these are numerous additional shrines and gold-covered towers. The pagoda complex is built in the typical Burmese Mon style, which includes four entrances facing the four compass points.

Also built in a similar style is Sule Paya, located in the city’s center. It is reputed to contain one of the original hairs of the Buddha brought back from India 2,500 years ago.