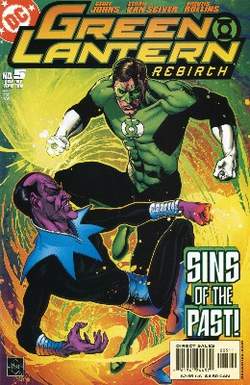 (pop culture)
Sinestro, the renegade Green Lantern (GL) created by writer John Broome and artist Gil Kane, first defied the Emerald Crusader in Green Lantern vol. 2 #7 (1961). The Guardians of the Universe, overseers of the intergalactic Green Lantern Corps, err when selecting the militant Sinestro of the planet Korugar to obtain their peacekeeping weapon, the power ring, and serve as the GL of space sector 1417. After distinguishing himself among the Corps, Sinestro abuses his power ring and oppresses his homeworld; the Guardians punitively strip him of the weapon and banish him to the antimatter universe of Qward. There he acquires a power ring made of yellow, the color against which the Corps' rings are ineffective, and vindictively spreads malice across the galaxy, placing him into conflict with Earth's Green Lantern, Hal Jordan. If his name weren't evidence enough, Sinestro's appearance left no question of his villainy. His prodigious cranium intimated his hubris, and his pointed ears, ubiquitous smirk, and red pigmentation suggested his Mephistophelian nature—he was unmistakably the polar opposite of the whitebread, handsome Jordan's knight-in-shining- armor GL. After five Green Lantern appearances between 1961 and 1963, Sinestro's visibility nearly trickled to a standstill until the mid-1970s, when he made a comeback (fighting GL, the Flash, and Superman, and joining the Secret Society of Super-Villains). Soon Sinestro was on television, as one of the Legion of Doom in the cartoon Challenge of the Super Friends (1978–1979), and in the live-action comedy special Legends of the Super-Heroes (1979), played by wiry, wacky comedian Charlie Callas. The DC Comics flashback miniseries Green Lantern: Emerald Dawn II (1991) disclosed that Sinestro was the GL who tutored neophyte Hal Jordan in the ways of the Green Lantern Corps. Sinestro preached intimidation, in violation of the Guardians' ethics and hinting at his eventual downfall. In the mid-1990s a power-drunk Jordan followed his mentor's footsteps when he rebelled against the Corps and killed several of his colleagues, breaking Sinestro's neck in a death duel. Jordan ultimately sacrificed his life to spare the galaxy in a redemptive epiphany. Resurrected in 2002, Sinestro resumed his assailment against GL when Jordan returned from the dead in the 2004–2005 miniseries Green Lantern: Rebirth. Readers discovered that Sinestro indirectly caused Jordan's fall from grace by freeing the imprisoned fear elemental Parallax, the entity which subliminally corrupted GL; “I made you a murderer, Hal Jordan,” sneered Sinestro in Rebirth #5. With both characters restored to status quo, the Green Lantern-versus-Sinestro enmity is, like the hero and villain themselves, reborn for the new millennium. Ted Levine voiced Sinestro in episodes of the animated Superman (1996–2000), Static Shock (2000–2004), and Justice League (2001–2004), and John DeLancie, Star Trek's Q, played Sinestro in the “Green Loontern” episode of Duck Dodgers (2003–present). Sinestro merchandising includes a Pocket Super Hero miniature, action figures, and a GL-versus-Sinestro coldcast porcelain statue.
The Supervillain Book: The Evil Side of Comics and Hollywood © 2006 Visible Ink Press®. All rights reserved.

Feedback
Flashcards & Bookmarks ?
Please log in or register to use Flashcards and Bookmarks. You can also log in with
Flashcards ?
My bookmarks ?
+ Add current page to bookmarks
Mentioned in ?
References in periodicals archive ?
Mark Strong, who previously portrayed Green Lantern villain Sinestro in the Ryan Reynolds film, will portray the villainous scientist Dr.
Shazam Comic-Con trailer - footage shows off DC Comics' latest big screen arrival; One child is going to become something to marvel at
He previously starred in 2011's 'Green Lantern', playing the classic DC villain Sinestro.
Mark Strong in talks to play villain in DC's 'Shazam'
The (http://www.dccomics.com/games/dc-legends) game features&nbsp;not only characters, but also gear associated with iconic characters&nbsp;such as Batman's&nbsp;Batarang, Sinestro's Power Battery or Lex Luthor's Kryptonite Ring.
'DC Legends' Android, iOS Apps Released
Meanwhile, other Lanterns also arrive in the Star Trek universe, such as Sinestro, the Yellow Lantern; Atrocitus, the Red Lantern; Carol Sapphire, the Violet Lantern; Saint Walker, the Blue Lantern; Larfleeze, the Orange Lantern; and also, Nekron, the Black Lantern, Death, who does the unthinkable--raise the dead on the planet Vulcan.
Found at ALA's Annual Conference and more
ALIEN ADVENTURES: Mark Strong as Sinestro MAGIC RING: Reynolds has the power NOT SO SUPER: Ryan Reynolds as the Green Lantern
COMIC CALAMITY; DVD OF THE WEEK
The head of the Green Lantern Corps, Sinestro, feels that Hal doesn't deserve to wield the power of the ring because he is plagued by fear, which on Oa, is regarded as shameful.
A POOR ATTEMPT
If you stayed for the closing credits of the movie, you'll know that there was a teaser scene signalling the sequel, as Sinestro slipped the yellow ring of fear on his finger, ready to turn supervillain.
No justice as Lantern gets switched off; ANORAK Wearing the anorak this week: PAUL COLE CITY
*** Green Lantern (12A) There's a nice line in selfaware mockery and while the action's mostly held back until the end both it and the visuals deliver the goods with solid performances from Ryan Reynolds as the ring-wielding superhero and Mark Strong's Sinestro who you just know will get the post-credits scene.
Movies on release
Swiftly teleported to the distant planet Oa, Hal runs the usual rookie obstacle course, receiving sage advice from chicken-fish hybrid Tomar-Re (voiced by Geoffrey Rush); rough training from piggish Kilowog (voiced by Michael Clarke Duncan); and sneering disapproval from Sinestro (Mark Strong), the Lanterns' supercilious, red-skinned leader.
Not quite suited to the task
As the Corps, led by Sinestro (a red-skinned, pointy-eared Mark Strong), assess the urgent problem of an all-consuming entity called Parallax that has escaped and is threatening the universe, Hal returns to Earth.
DAZZLING VISUALS CAN'T HIDE LANTERN'S LACK OF SUBSTANCE; OurVerdict
While he suffers from all of the usual frailties, Hal is blessed with empathy and he slowly comes to terms with his superpowers, spurred on by sweetheart Carol Ferris (Blake Lively) and Green Lanterns Abin Sur (Temuera Morrison) and Thaal Sinestro (Mark Strong).
ALSO OUT