In crystalline solids the atoms or molecules are stacked in a regular manner, forming a three-dimensional pattern which may be obtained by a three-dimensional repetition of a certain pattern unit called a unit cell. When the periodicity of the pattern extends throughout a certain piece of material, one speaks of a single crystal. A single crystal is formed by the growth of a crystal nucleus without secondary nucleation or impingement on other crystals. See Crystal structure, Crystal-

When grown from a melt, single crystals usually take the form of their container. Crystals grown from solution (gas, liquid, or solid) often have a well-defined form which reflects the symmetry of the unit cell. See Crystal growth

Ideally, single crystals are free from internal boundaries. They give rise to a characteristic x-ray diffraction pattern.

Many types of single crystal exhibit anisotropy, that is, a variation of some of their physical properties according to the direction along which they are measured. For example, the electrical resistivity of a randomly oriented aggregate of graphite crystallites is the same in all directions. This anisotropy exists both for structure-sensitive properties, which are strongly affected by crystal imperfections (such as cleavage and crystal growth rate), and for structure-insensitive properties, which are not affected by imperfections (such as elastic coefficients).

Single crystals are valuable as materials that have special physical propertes. For example, diamond and borazon are extremely hard, fluorite is transparent to a broad range of wavelengths, and quartz is piezoelectric. Single crystals are capable of changing their properties under the influence of external factors (light, mechanical strains, electric and magnetic fields, radiation, temperature, or pressure); therefore, products and components made from them are used as various types of transformers in radio electronics, quantum electronics, acoustics, and computer technology. Originally, natural single crystals were used in engineering, but supplies are limited and the quality is not always sufficiently high. At the same time, many valuable properties have been found only in synthetic crystals. Therefore, the necessity of growing crystals artificially has arisen. The parent substance for growth of single crystals may be a solid (particularly a powder), a liquid (melt or solution), or a gas.

Methods of growing single crystals from a melt include the Stockbarger, Czochralski, and Verneuil methods and zone melting. In the Stockbarger method a crucible containing a melt is moved vertically through a furnace at a rate of 1–20 mm/hr (Figure 1). The temperature in the plane of the diaphragm is kept equal to the crystallization temperature of the substance. Since the crucible has a conical bottom, when it is slowly lowered the melt in the cone is at a temperature below the crystallization temperature, and very small crystals form. Because of geometric selection, only one crystal survives. The selection is related primarily to the anisotropy of the rates of growth of the single crystal’s facets. This method is used widely in the industrial production of large single crystals of fluorite, lithium fluoride, cadmium sulfide, and other chemicals. 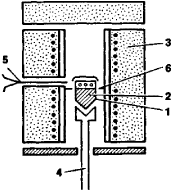 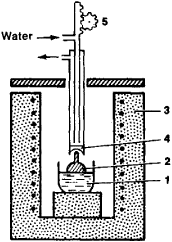 The Verneuil method uses no crucible. The substance, in the form of a powder (particle size, 2–100 microns [LI]), is fed from a bin (Figure 3) through an oxyhydrogen flame to the upper, molten face of a seed single crystal, which is slowly lowered by a mechanism. The Verneuil method is the principal industrial method of producing refractory single crystals, such as ruby, spinel, and rutile. 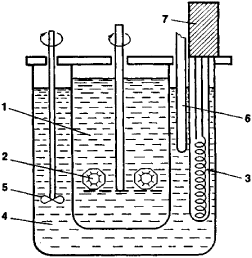 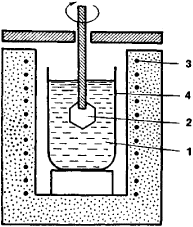 Hydrothermal synthesis of single crystals is based on the dependence of the solubility of the substance in aqueous solutions of acids and alkalies on pressure and temperature. The concentration of the substance in solution and the supersaturation required to produce single crystals are accomplished by means of high pressure (up to 300 meganewtons per sq m [MN/m2], or 3,000 kilograms-force per sq cm [kgf/cm2]) and a temperature difference between the upper part of the autoclave (T1∼ 250°C) and lower part (T2 ∼ 500°C) (Figure 6). The transfer of the substance is accomplished by convective mixing. Hydrothermal synthesis is the main process used to produce quartz single crystals. 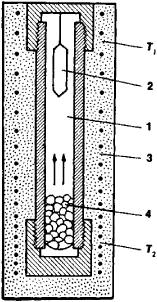 Special methods exist for reducing the number of defects in a single crystal (such as annealing or growing single crystals on defectless seeds).

Various methods of heating are used in growing single crystals; among them are resistance, high-frequency, gas-flame, and, less frequently, electron-beam, radiation (including laser), and electric-arc heating.

[′siŋ·gəl ′krist·əl]
(crystallography)
A crystal, usually grown artificially, in which all parts have the same crystallographic orientation.
McGraw-Hill Dictionary of Scientific & Technical Terms, 6E, Copyright © 2003 by The McGraw-Hill Companies, Inc.

Feedback
Flashcards & Bookmarks ?
Please log in or register to use Flashcards and Bookmarks. You can also log in with
Flashcards ?
My bookmarks ?
+ Add current page to bookmarks
Mentioned in ?
References in periodicals archive ?
While the grain size for polycrystalline graphene is 5-20 pm, single crystals can have a grain of up to 4cm, and while 95 percent of polycrystalline graphene is a monolayer, single crystal graphene allows a great deal of control over the thickness.
Seeding Large Single-Crystal Graphene for Photonics Applications: The process is simpler and yields higher-quality graphene crystals that display the same conductive properties
Today's microchips use single crystals of silicon and other semiconductors.
BIG THINGS HAPPEN WITH TINY TECHNOLOGY
The single crystal turbine blade joins more than 260 ASME landmarks around the world, 10 of them being in Connecticut.
Pratt & Whitney turbine blade named historic mechanical engineering landmark
Kvistgaard, Denmark, February 02, 2018 --(PR.com)-- Single crystals for broader bandwidth and higher sensitivity
CTS Provides Broader Bandwidth with Piezoelectric Single Crystals
Li, "Investigation of native defects and property of bulk ZnO single crystal grown by a closed chemical vapor transport method," Journal of Crystal Growth, vol.
Surface Morphology Study of Chemical Vapor Transport of ZnO Crystals
CTG-AM has vertically integrated its entire single crystal manufacturing process.
CTS acquires CTG Advanced Materials
CTG-AM is the only company to have vertically integrated its entire single crystal manufacturing process.
CTS Acquires Medical Market Supplier of Piezoelectric Materials for USD 73m
As shown, single crystal blades are clearly superior.
Gems of turbine efficiency
Luo, "Triple-like hysteresis loop and microdomain-macrodomain transformation in the relaxor-based 0.76Pb([Mg.sub.1/3] [Nb.sub.2/3])[O.sub.3]-0.24PbTi[O.sub.3] single crystal," Materials Research Bulletin, vol.
Temperature dependence of electrical properties and crystal structure of 0.29Pb([In.sub.1/2][Nb.sub.1/2])[O.sub.3]-0.44Pb([Mg.sub.1/3][Nb.sub.2/3])[O.sub.3]-0.27PbTi[O.sub.3] single crystals
According to a statement issued by Rolls-Royce, one single crystal turbine blade extracts around 1,000 hp from the gas flow towards the rear of the engine, which is equivalent to the power of an Fl race car.
Rolls-Royce launching investment plant
Meller Optics otters sapphire and single crystal quartz cell windows for Beckman and other centrifuges that are scribed with the optic axis projection to simplify alignment.
Centrifuge cell windows offer easy alignment
An X-ray diffraction (XRD) system transmits X-ray beams to a sample (generally a single crystal, metallic solid or a powder) and records the diffraction pattern that occurs when the X-ray photons encounter the inter-atomic gaps within the crystal structure.
XRD flourishes in a broad market