Doyle, Sir Arthur Conan (kōˈnən, kŏnˈən), 1859–1930, British author and creator of Sherlock Holmes, b. Edinburgh. Educated at the Royal Infirmary in Edinburgh, he received a medical degree in 1881. In 1887 the first Sherlock Holmes story, A Study in Scarlet, appeared in Beeton's Christmas Annual. Doyle abandoned his medical practice in 1890 and devoted his time to writing. Other works that involve the sleuthing of the great detective include The Sign of the Four (1890), The Memoirs of Sherlock Holmes (1894), The Hound of the Baskervilles (1902), The Return of Sherlock Holmes (1905), His Last Bow (1917), and The Case Book of Sherlock Holmes (1927). The brilliant and theatrical Holmes solves all his extraordinarily complex cases through ingenious deductive reasoning. His sober, credulous companion, Dr. Watson, narrates most of the Sherlock Holmes stories. The Holmes cult has given rise to several notable clubs, of which the Baker Street Irregulars is perhaps the most famous. Doyle also wrote historical romances, including Micah Clarke (1889) and The White Company (1891). His play A Story of Waterloo (1894) was one of Sir Henry Irving's notable successes. Doyle also wrote two political pamphlets justifying Great Britain's actions in the South African War. In his later years he became an ardent spiritualist and wrote a History of Spiritualism (1926). He was knighted in 1902. 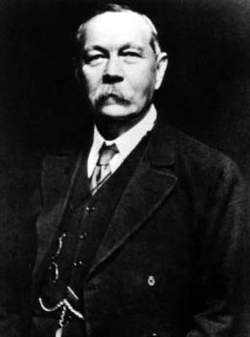 Sherlock Holmes author Sir Arthur Conan Doyle, who was closely involved with Spiritualism for most of his life. Courtesy Fortean Picture Library.

Born in Edinburgh, Scotland, on May 22, 1859, Arthur Ignatius Conan Doyle was the third child and eldest son of ten siblings born to Charles Altamont Doyle and Mary (Foley) Doyle. Arthur became best known as a novelist and as the creator of literary detective Sherlock Holmes. He was involved with Spiritualism for most of his life, and adopted it as his religion in 1918.

Doyle attended Hodder College, Stonyhurst College, and Feldkirch College (Austria) before going to Edinburgh University to study medicine. From February to September of 1880, Doyle served as a surgeon on the Greenland whaler Hope, and in 1881–82 on the steamer Mayumba to West Africa. In June of 1882, he moved to Southsea, near Portsmouth in the south of England, where he stayed until 1891. After a number of short stories and non-fictional articles, Doyle published A Study in Scarlet in 1887. He moved to Upper Wimpole Street, off Harley Street in London, where he set up business as an eye specialist. The first six Sherlock Holmes stories appeared in Strand Magazine in 1891 and The White Company, a historical novel, was also published that year.

In 1885, Doyle married Louise Hawkins, the sister of one of his patients. From 1885–88 Doyle participated in table tipping experiments at the house of General Drayson, a patient of his and a teacher at the Greenwich Naval Academy. These séances prompted Doyle to become a member of the Society for Psychical Research (SPR) and to carry out an investigation of the medium Mrs. Ball. In 1902, Doyle was knighted for his work in the military field hospitals in South Africa during the Boer War. In 1906, Doyle’s wife died of tuberculosis. The death affected Doyle deeply, though a year later he married Jean Leckie.

Although Doyle hadn’t arrived at a definite conclusion regarding life after death by the time he met Sir Oliver Lodge, he was very much impressed by Frederick W. H. Myers’s book Human Personality and Its Survival After Bodily Death (1903). It has been suggested that one of the factors contributing to Doyle’s conversion to Spiritualism was the death of his son, Captain Alleyne Kingsley Conan Doyle, who died from influenza aggravated by wounds incurred in World War I. Doyle denied this, saying he had proclaimed himself a Spiritualist in April, before his son’s death.

Doyle’s wife Jean became a medium and delivered many messages through her guide Phineas. Some years after the death of his son Kingsley, Doyle attended a séance with a Welsh medium and his son came through, giving a great deal of information known only to Kingsley and his father. At a different séance, with another medium, Doyle’s mother and nephew materialized “as plainly as ever I saw them in life,” according to Doyle. In 1925, Doyle’s Spiritualist novel The Land of Mist featuring Professor Challenger (of The Lost World) began serialization in Strand Magazine. It was published in book form the following year.

Felicia Scatcherd, a friend of Doyle’s, contacted him in 1920 to tell him of photographs that had been taken which seemed to prove the existence of fairies. These had been taken in Yorkshire by two young girls; Elsie Wright (age 16) and her cousin Frances Griffiths (age 10). Doyle’s Theosophist friend Edward L. Gardner examined the photos and proclaimed them genuine. Doyle accepted Gardner’s word. In the Christmas 1920 issue of Strand Magazine, Doyle published an article about the fairies, complete with photographs. Two years later he published the book The Coming of the Fairies, which gave a full account of the girls’ encounter with the little people. He then left for Australia. While he was away, it came out that the photos taken by the two girls were of cut-outs from a 1915 picture book (Princess Mary’s Gift Book). The photographs were fake. Doyle returned from his trip to find himself a laughingstock. Ruefully, he admitted that he may have been taken in. It wasn’t until the early 1980s, however, that Elsie and Frances themselves admitted to the hoax.

In 1922, a falling out with the Society for Psychical Research occurred. Doyle eventually resigned from the society, widening the gulf between the SPR and Spiritualists. Other members followed Doyle’s lead. In that year also the Doyles had a falling out with Harry Houdini, who had been a close friend for years.

In 1924, Doyle wrote and published at his own expense The History of Spiritualism (dedicated to Sir Oliver Lodge) and actually opened a Spiritualistic bookstore. He said he wrote the book “to give man the strongest of all reasons to believe in spiritual immortality of the soul, to break down the barrier of death, to found the grand religion of the future.” In 1925, he was elected honorary president of the International Spiritualist Congress in Paris and later that year trounced Sir Arthur Keith in a public discussion on Spiritualism held in London.

Doyle was president of the London Spiritualist Alliance when one of its mediums, a Mrs. Cantlon, was charged with fortune-telling. He wrote a stirring letter to The Times against what he saw as persecution of Spiritualists and Spiritualism and began a drive to modify the Fortune-Telling Act. Doyle led a deputation to the Home Secretary on July 1, 1930, but six days later he died at his home in Crowborough.