1642–1727, English mathematician and natural philosopher (physicist), who is considered by many the greatest scientist that ever lived.

Newton studied at Cambridge and was professor there from 1669 to 1701, succeeding his teacher Isaac Barrow as Lucasian professor of mathematics. His most important discoveries were made during the two-year period from 1664 to 1666, when the university was closed and he retired to his hometown of Woolsthorpe. At that time he discovered the law of universal gravitationgravitation,
the attractive force existing between any two particles of matter. The Law of Universal Gravitation

Since the gravitational force is experienced by all matter in the universe, from the largest galaxies down to the smallest particles, it is often called
..... Click the link for more information. , began to develop the calculuscalculus,
branch of mathematics that studies continuously changing quantities. The calculus is characterized by the use of infinite processes, involving passage to a limit—the notion of tending toward, or approaching, an ultimate value.
..... Click the link for more information. , and discovered that white light is composed of all the colors of the spectrumspectrum,
arrangement or display of light or other form of radiation separated according to wavelength, frequency, energy, or some other property. Beams of charged particles can be separated into a spectrum according to mass in a mass spectrometer (see mass spectrograph).
..... Click the link for more information. . These findings enabled him to make fundamental contributions to mathematics, astronomy, and theoretical and experimental physics.

Newton summarized his discoveries in terrestrial and celestial mechanics in his Philosophiae naturalis principia mathematica [mathematical principles of natural philosophy] (1687), one of the greatest milestones in the history of science. In it he showed how his principle of universal gravitation provided an explanation both of falling bodies on the earth and of the motions of planets, comets, and other bodies in the heavens. The first part of the Principia is devoted to dynamics and includes Newton's three famous laws of motionmotion,
the change of position of one body with respect to another. The rate of change is the speed of the body. If the direction of motion is also given, then the velocity of the body is determined; velocity is a vector quantity, having both magnitude and direction, while speed
..... Click the link for more information. ; the second part to fluid motion and other topics; and the third part to the system of the world, i.e., the unification of terrestrial and celestial mechanics under the principle of gravitation and the explanation of Kepler's lawsKepler's laws,
three mathematical statements formulated by the German astronomer Johannes Kepler that accurately describe the revolutions of the planets around the sun. Kepler's laws opened the way for the development of celestial mechanics, i.e.
..... Click the link for more information.  of planetary motion. Although Newton used the calculus to discover his results, he explained them in the Principia by use of older geometric methods.

Newton's discoveries in optics were presented in his Opticks (1704), in which he elaborated his theory that lightlight,
visible electromagnetic radiation. Of the entire electromagnetic spectrum, the human eye is sensitive to only a tiny part, the part that is called light. The wavelengths of visible light range from about 350 or 400 nm to about 750 or 800 nm.
..... Click the link for more information.  is composed of corpuscles, or particles. His corpuscular theory dominated optics until the early 19th cent., when it was replaced by the wave theory of light. The two theories were combined in the modern quantum theoryquantum theory,
modern physical theory concerned with the emission and absorption of energy by matter and with the motion of material particles; the quantum theory and the theory of relativity together form the theoretical basis of modern physics.
..... Click the link for more information. . Among his other accomplishments were his construction (1668) of a reflecting telescopetelescope,
traditionally, a system of lenses, mirrors, or both, used to gather light from a distant object and form an image of it. Traditional optical telescopes, which are the subject of this article, also are used to magnify objects on earth and in astronomy; other types of
..... Click the link for more information.  and his anticipation of the calculus of variations, founded by Gottfried LeibnizLeibniz or Leibnitz, Gottfried Wilhelm, Baron von
, 1646–1716, German philosopher and mathematician, b. Leipzig.
..... Click the link for more information.  and the BernoullisBernoulli
or Bernouilli
, name of a family distinguished in scientific and mathematical history. The family, after leaving Antwerp, finally settled in Basel, Switzerland, where it grew in fame.
..... Click the link for more information. . In later years Newton considered mathematics and physics a recreation and turned much of his energy toward alchemy, theology, and history, particularly problems of chronology.

Newton was his university's representative in Parliament (1689–90, 1701–2) and was president of the Royal Society from 1703 until his death. He was made warden of the mint in 1696 and master in 1699, being knighted in 1705 in recognition of his services at the mint as much as for his scientific accomplishments. Although Newton was known as an open and generous person, at various times in his life he became involved in quarrels and controversies. The most notable was his dispute with Leibniz over which of them had first invented calculus; today they are jointly ascribed the honor. 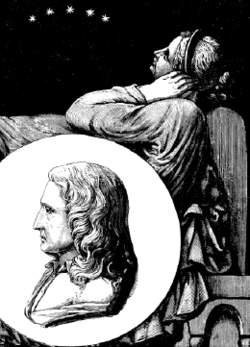 A nineteenth-century engraving of Sir Isaac Newton, the great scientist and astronomer. Reproduced by permission of Fortean Picture Library.

Sir Isaac Newton, the scientist famous for formulating the law of universal gravitation, was born January 5, 1642, in Woolsthorpe, Lincolnshire, England, and died on March 31, 1727, in Kensington, England. He was highly regarded in his time, much as Albert Einstein later was. Newton’s study of Johannes Kepler’s third law of motion led him to theorize that the gravitational attraction between Earth and the Moon—and, by extension, the gravitational attraction between all bodies—is inversely proportional to the square of the distance between them. This law of universal gravitation was put forth in his Principia Mathematica (1687). Newton is credited with many other achievements, such as the invention of calculus.

As a young man studying mathematics, Newton also studied astrology. An often-repeated, though probably apocryphal tale, is that the astronomer Edmond Halley kidded Newton about his interest in astrology. Newton, it is said, defended himself by asserting, “I have studied the subject, Mr. Halley, and you have not.” In any event, Newton never recanted his belief in astrology, nor did he ever imply that the new science he and his contemporaries were creating invalidated astrology in any way.

Feedback
Flashcards & Bookmarks ?
Please log in or register to use Flashcards and Bookmarks. You can also log in with
Flashcards ?
My bookmarks ?
+ Add current page to bookmarks
Mentioned in ?
References in periodicals archive ?
One such image was the engraving with the significant title of "The Apotheosis of Sir Isaac Newton" (1732) by George Bickham.
Mordechai Feingold. The Newtonian Moment: Isaac Newton and the Making of Modern Culture
He has three in honor of Sir Isaac Newton, one of which displays symbols from Newton's famous law of gravity.
Sky writing: astrophysicist has a pen collection that is out or this world
Until Einstein came along, the scientific understanding of how the physical universe operated was based largely on the 17th-century work of Englishman Sir Isaac Newton.
1905: Einstein's 'Miracle Year': how an unknown scientist rewrote the rules of physics, and in the process, changed the world forever
Sir Isaac Newton (no slouch when it came to innovation) once wrote that he might have seen further than most, but he did so "by standing upon the shoulders of giants"--Copernicus, Kepler, Galileo, and others.
Patent absurdity: how extended copyrights choke the economy
Sir Isaac Newton, inventor of calculus, optics, mechanics and the theory of gravity, left the lofty halls of Cambridge University after 25 years to become the Master of the Royal Mint, a position he held for the last 30 years of his long life.
Dark Matter. (Audiobooks: Fiction)
At its height, the company numbered leading members of the intellectual, political and aristocratic classes including Jonathan Swift, Sir Isaac Newton, the Duke of Portland, and King George I.
The Secret History of the South Sea Bubble. (History Lessons)
It was Sir Isaac Newton, however, who placed science on a solid footing by formalizing existing knowledge in terms of mathematical models and universal laws.
Model selection in genomics. (Editorials)
"I can calculate the motions of heavenly bodies, but not the madness of people," Sir Isaac Newton wrote in 1721.
Fear, greed and the madness of markets: the decisions investors make
This finding paved the way for the astronomical contributions of Sir Isaac Newton a few years later.
Setting Sail for the Universe: Astronomers and Their Discoveries
Fundamentally, the father of all holsters is that apple-brained fellow, Sir Isaac Newton. The basic reason for a holster, after Mall, is gravity, the inexorable force tugging at your trousers and anything you try to shove inside them -- like a pistol.
The father of all holsters. (Handgun Leather)
Hawking is Lucasian Professor of Mathematics at Cambridge University, a post once held by Sir Isaac Newton.
A brief history of mine. (talking innovation)
Newton's Gift: How Sir Isaac Newton Unlocked the System of the World.
Newton's Gift: How Sir Isaac Newton Unlocked the System of the World