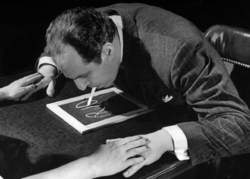 Slate writing is an activity that in the late-nineteenth and early twentieth centuries was a popular form of spirit contact in Spiritualist circles. A medium would begin with a blank writing slate (a small blackboard once used by children in elementary school). The slate was then placed in a position that appeared to prevent any normal access to it, and in a brief time a message seemed to be written on the slate by a spirit. Mediums William Eglinton (1858–1933), Fred P. Evans (b. 1862), and Henry Slade (d. 1905) were prominent early proponents of the slate’s usage.

To the average, untutored person, slate writing can appear quite impressive. Beginning with a blank slate placed so that neither the medium nor any assistants appears to have access to it, meaningful responses to questions posed by the sitter appear. These are often followed by sounds that seem to be coming from someone writing on the slate.

The practice largely disappeared in the early twentieth century, when the nature of the phenomenon as a conjuring trick was revealed and discredited by organizations such as the Society for Psychical Research. The trick involved either the substitution of prepared slates for the original black slate or the use of two-sided slates that could be turned around, revealing a message written on the back that everyone thought was the front.

Feedback
Flashcards & Bookmarks ?
Please log in or register to use Flashcards and Bookmarks. You can also log in with
Flashcards ?
My bookmarks ?
+ Add current page to bookmarks
Mentioned in ?
References in periodicals archive ?
They would have to use picture or word communication boards, magic slate writing board, or simple gestures with a corresponding key for staff/family to interpret.
The Passy-Muir valve